Unfaithful Wives is the title of the book, but it is only half of the story. From first page to last, Orrie Hitt’s 1956 novel is awash with adulterous, scheming, backstabbing, dishonest, and dissatisfied lovers of both genders. The book might sound salacious and sleazy—and I’m sure that’s what the publishers wanted—but the story that Hitt delivers is far more brooding. A doom-laden, blue-collar soap opera, Unfaithful Wives is heavy-duty noir on par with David Goodis, Gil Brewer, and the best of the classical masters.

The story is a daisy chain of infidelity centering around “top-flight grocery salesman” Fred Sharpe and his wife, Rita. He’s always on the road for business trips, and she’s stuck at home in rural New Jersey. Both of them are so dissatisfied and desperate that they seek out extra-marital affairs to fulfill the longing in their lives. Their respective lovers, it turns out, are just as philandering and two-timing. Murderous desire is in all of their hearts—and one of them can’t contain it. Soon, Fred and Rita find themselves the focus of a homicide investigation that tests the loyalties of everyone involved.

Hitt was a working class writer, and one of the hallmarks of his style is the way he evokes the blue-collar milieu with such striking and depressing realism. His is the workingman’s noir. No trenchcoats, no fedoras, no gats, roscoes, or bosomy blonde wisecracking secretaries. His characters aren’t Private Eyes. Instead, they’re a traveling salesman like in I’ll Call Every Monday, a “top-flight grocery salesman” like Fred in Unfaithful Wives, a TV repairman in Dial “M” For Man, or some other mundane profession if indeed they’re lucky enough be working (Hitt’s empty wallets ring truer than in most other novles). In Unfaithful Wives, people live in small towns and travel to small cities—there’s nothing “big” anywhere in this world. Even when characters steal money and go on the lam, it’s a paltry $8000—no small sum, even today, but certainly not the stuff that dreams are made of. Which raises a good point: Hitt’s characters don’t dream, or perhaps they have just run out of dreams to hopelessly cling to. 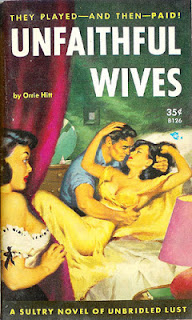 The key noir ingredient to the characters in Unfaithful Wives is that they feel trapped in their current situation. Jobs, marriage, finances, location—they’re all stuck in their same place because of one thing or another. “They weren't going any place. Christ, they didn't have enough money between them to get out of town. They were just a couple of jerks trying to run a dream into overtime.”

Characteristic of Hitt’s novels, Unfaithful Wives presents a character set seemingly living out the conformist American dream but who is, deep down, dissatisfied by such standard morals and traditional lots in life. Much like the contemporaneous Beat generation, Hitt’s characters are sick of the status quo, but unlike those young rebels, Hitt’s characters lack the mobility to change their lives. The people in Unfaithful Wives are old enough to have responsibilities but young enough to feel that their predestined humdrum lives are tantamount to eternal torture and damnation. Just look at the way that Hitt describes Fred and Rita’s marriage:

He didn't know. It was something that worried him, bothered him, ached down inside of him every hour of the day. They ought to be happy and they weren't  They ought to argue and fight the way couples do, but they didn't  He just went out on the road, selling groceries, making a nice living, and when he got finished with a trip he went home and they sat around looking at each other.


They’re so defeated they don’t even fight! Talk about being “down there,” even David Goodis’ lovers had enough spirit left for a good fight now and then. The people in Unfaithful Wives would depress even the lowliest of Goodis’ protagonists.

This was a fear against which he could find no defense—there was no gun to shoot, no logical story to tell, nothing. Here was a web being spun as if by a huge, invisible spider, a web that coiled around his mind and body and caught him helpless in its toils.


What one notices right from page one is a heavy mood of despair. When we first meet Fred, he wakes next to his lover, Sandra. Hungover and addled by guilt, he says, “I’ve got an idea I’m dead … I almost wish I was.” Throughout the novel, there’s never any pleasure in sex. Tears, remorse, anger, and self-loathing run rampant through Hitt’s bedrooms. “Only the darkness listened to their tears.” Similar to Harry Whittington’s sleaze paperbacks for Nightstand and other sleaze lines, the sex in Unfaithful Wives is bathed in oblivion. One bedroom encounter is described: “And then the walls of the room drove in on them, spinning them out into space, plunging them down into a canyon where the only sound was the slow, uneven crying of the girl beside him.” Hitt captures the dark side of ecstasy, when in the throws of passion we lose control of our thoughts and, instead of pleasure, we let loose all of our panic and paranoia. The prevalence of biting and bleeding during foreplay also suggests a vampiric quality to the relationship, reinforcing the notion that these aren't nurturing bonds and that the partners are draining the life out of one another, slowly killing them, taking and not giving.

Hitt’s description of Fred waking up next to Sandra shows just how nauseating and doomed even the best of these relationships are: “He opened his eyes, looking up at her, and suddenly he wanted to be very sick.” Fred hates himself, and he doesn’t even find the woman he is with attractive. There’s something almost suicidal about his attraction to Sandra—and this same self-destructive impulse can be found in all of the relationships in Unfaithful Wives.

“Bastard,” he said, looking at himself in the mirror.


One of the qualities I like about the characters in Unfaithful Wives is that not only do they know when they’re doing wrong, but they feel remorse. For the most part, it doesn’t stop them—but it does make them more human, more believable. Even the murderer soon forgets his/her [sorry, no spoiler alert here!] rage and settles into regret. Hitt’s people are so defeated they can’t even be good villains. Even in dishonor, they fail. There’s no success anywhere in this world. As Hitt puts it, “Sometimes a guy won. And sometimes he lost.” Simply and eloquently, that’s noir. And Hitt knows it as much as anyone.

Unfaithful Wives is a stunning surprise, even to an Orrie Hitt fan like myself. I loved I’ll Call Every Monday, but the emotional maturity and the depths of feeling in Unfaithful Wives reveal Hitt to be more than just a fine craftsman, but an author with soul, albeit a damaged one in true noir fashion. It’s a fast read (I finished it in a few hours), but it is sure to resonate for a long time to come.
at November 19, 2012