Lou Boxer, bless his soul, programmed Sunday's first panel a little later than normal -- 10AM. An inspired idea, as Saturday night involved a couple of bars, lots of noir talk, and several goodbyes to NoirCon attendees and friends that were heading home early Sunday morning before the last two panels. Even with a solid 6 hours of sleep, however, somehow I managed to run late and not have time to get breakfast before the first panel of the day. So -- as soon as I hit the lobby, I scoffed down 4 donut holes, 1 red velvet cupcake, and a nice hot cup of coffee before taking my seat in the front row. 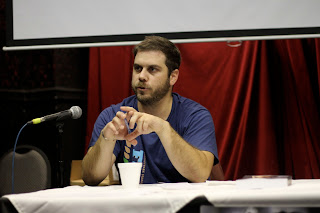 William Buffy Hastings of Farley's Bookshop took the mic first and spoke about Farley's Bookshop, the need to support indie bookstores, and some of the great books they brought out to NoirCon. More than just the authors as the convention, Farley's brought out a diverse selection of contemporary books they feel are important and urgent to know about. They brought out a number of politically-themed books from PM press, including Gary Phillips' The Underbelly (which I bought). Buffy also highly recommended East Bay Grease by Eric Miles Williamson, "behind Woodrell, the great American novelist." High praise indeed, but coming from Buffy, it's an endorsement I take seriously. I'll be checking out East Bay Grease soon.

Next, Buffy interviewed Kent Harrington about his new novel, The Rat Machine, which had its world premiere at NoirCon. The Rat Machine is an epic novel of global political intrigue about the international drug trade and how high-ranking Nazi officials were placed into positions of government authority instead of being prosecuted. Instead of compromising with major publishers, Harrington decided to self-publish the novel and craft the narrative as he saw fit. 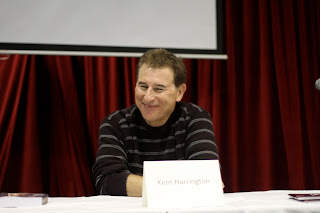 Before the final panel of NoirCon 2012, Ed Pettit MC'd some epic raffling. 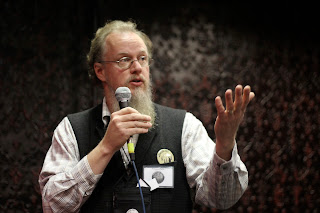 Since Lulu Lollipop had gone home, Crime Factory's Liam Jose tried his best to fill her shoes. I think he has a bright future as Australia's premier pin-up noir model. 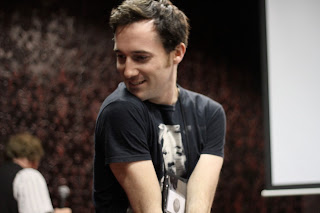 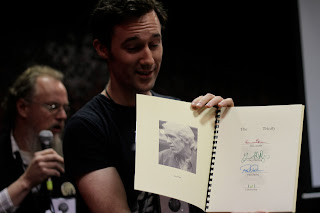 Last but certainly not least was Crime in Primetime, a panel about noir television shows. 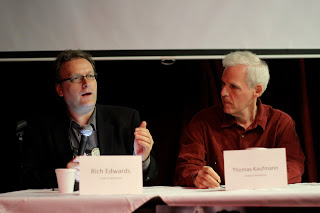 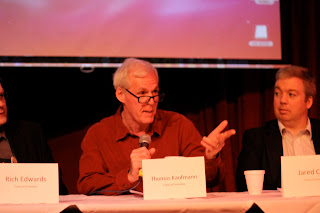 Mystery novelist and cinematographer Thomas Kaufman spoke about Hill Street Blues and its innovative documentary realist style. He interviewed the show's creator, who said that it wasn't modeled after noir specifically, but that they did encounter resistance from the studio who didn't understand their dark lighting and realist staging. 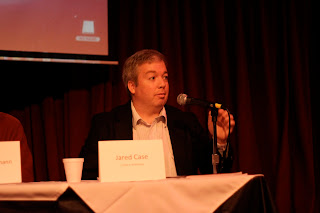 Jared Case, from the George Eastman House, spoke about The Shield, a show I've heard many great things about. He showed a number of great stills from the series and discussed how it integrated noir aesthetics (particularly shadows and other lighting motifs) and how it reflected changes in characters throughout the different seasons.

I was sorry that NoirCon 2012 came to an end, but before it was over everyone was already talking about 2014, ideas for future panels, potential guests, and essays for the program. I can't wait for the Goodis Bus To Hell Tour in January 2013, when we noir heads gather at the grave of David Goodis and pay tribute to his memory, legacy, and the dark but soulful world he created.

Thank you to Lou Boxer an Deen Kogan for throwing such a great party! Thanks to Jeff Wong for all of the great artwork, beer label, coasters, and for giving a look to NoirCon 2012. And to all NoirCon fellow travelers, of which there are too many to name here.