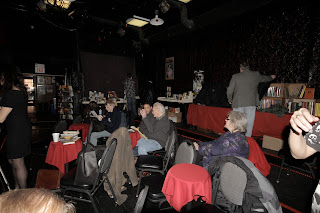 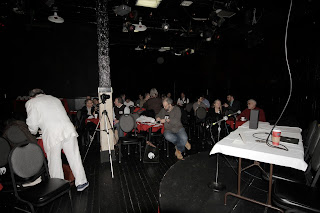 Friday morning when I arrived at the Society Hill Playhouse, I found the backroom abuzz with this year's participants. A nice-sized crowd that filled the room without feeling overcrowded. There was enough room to take a look at Farley's or Port Richmond's books without having to resort to murder. 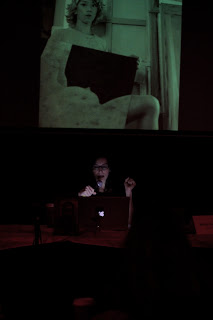 First up was Heide Hatry and "The Art of Noir." She showed slides of her body of work, including many of the performances shown on the opening night for participants who weren't able to make it out. Lots of blood and pig skin in the name of provocative, political performance art. Heide imparted a few important noir lessons from her career. First, don't leave dead animals in your luggage when traveling -- the authorities always take them away. Your backpack is much safer. And second, if you live in a shared apartment building, don't leave dead animals in the communal freezer in the basement if you don't want the cops to show up thinking they've located a serial killer. 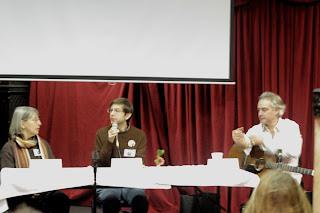 Next, I humbly took the stage to moderate a conversation between S.J. Rozan and Wesley Stace (aka John Wesley Harding) called "Career in C Minor." Stace's most recent book is a classical music-themed mystery called Charles Jessold, Considered as a Murderer -- it's a terrific book, just imagine Thomas Mann's Doctor Faustus with a little more murder. Rozan's latest is Ghost Hero, the 11th in her Lydia Chin / Bill Smith private eye series, another stellar NYC novel fueled by an art-related murder that goes back to the Tiananmen Square Massacre. Stace and Rozan discussed their respective backgrounds in music and architecture and its affect on their subsequent work as novelists. Stace also graced us by singing two songs. 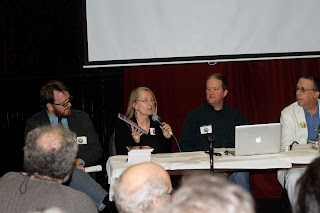 "Good Country People: Deranged Preachers, Crazed Cops and Other N’er Do Wells of Southern Noir" followed. Jonathan Woods, Vicki Hendricks, Jake Hinkson, Joe Samuel Starnes, and Peter Farris discussed a wealth of Southern Noir writers whom they admired. These are just a few of the topics. Jonathan Woods presented on how obsession and "mad, first person narrators" links Poe with Jim Thompson. Joe Samuel Starnes discussed the noir side of Faulkner's Absalom, Absalom. Jake Hinkson talked about religion, noir, and The Night of the Hunter and Flannery O'Connor. And Vicki Hendricks spoke about Harry Crews and his advice to young writers that that "If you can be discouraged, you should be discouraged." 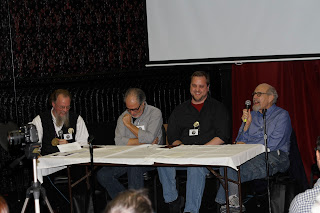 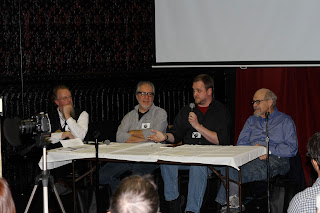 After lunch, Lawrence Block, Anthony Bruno, Ed Pettit and Duane Swierczynski took the stage for "The Movie Was Better," a discussion about which films have influenced these writers. Anthony cited Chester Himes' Cotton Comes to Harlem. Duane mentioned that seeing Faces of Death at age 9 had a profound affect on him and was, perhaps, one of the reasons why he turned in decapitation stories while attending Catholic grade school. Some of the nuns loved it, he mentioned, but some of them were terrified. "Nuns are my target audience still," Duane joked -- or maybe he was serious? Block mentioned that the anthology television shows of the 1950s "taught me something about dramatic instruction." He mentioned one particular episode whose program title he can't remember -- it was about a group of people plotting an assassination. At first, you are rooting for them, but at the end it is revealed that it was Lincoln's assassination they were planning, which makes you re-think everything you previously felt. "Your sympathies were inverted in a wonderfully tricky fashion," said Block. The mysterious nature of the show continues to intrigue Block, but not in the same way that it used to. "The fact that it has disappeared from the public consciousness has tempted me to write it." Here's hoping he does. 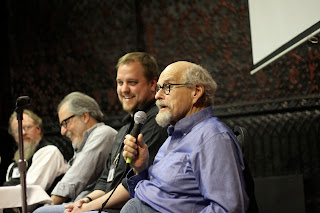 Duane recalled working with Brett Simon on an adaptation of his novel Severance Package. In a reversal of the cliche, this time it was Duane who wanted to make a lot of changes to his novel and Simon who wanted to be more faithful to the source material. Sadly, the studio's initial enthusiasm mysteriously disappeared and the project fell through. Sigh ... well, I still have my fingers crossed the movie will see the light of the projector soon, as I'd love to see that. Block also mentioned that Hammett's style increasingly moved towards "prose screenplays" because he realized that movies were the future of his income as a writer. Block also shared this wisdom that too many filmmakers and screenwriters don't realize: "When you have good actors, you don't have to have the words do all the work." 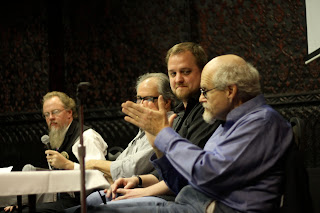 Robert Polito and Joan Schenkar, two of Noir's finest and most original scholars, shared some of their great findings. Polito recontextualized Maya Deren's Meshes of the Afternoon as a Noir film, and Joan enlightened us with maps of Patricia Highsmith's literary murders and real-life lovers -- it's chilling how they line up when compared! 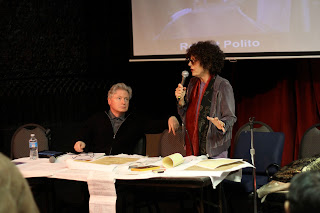 "Noir is the spider that sits on top of the world," said Schenkar -- that's one of the best definitions of Noir I've heard. 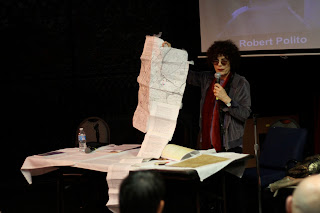 Author and former Private Eye Writers of America president Jeremiah Healy interviewed Otto Penzler, winner of the Jay and Deen Kogan Award for Literary Excellence. Their conversation covered the beginnings of Penzler's career, from his small apartment in the Bronx in the 1970s when he was a one-man operation, writing receipts, fulfilling orders, editing manuscripts, and shipping the first Mysterious Press books. When Penzler began his limited edition, cloth-bound, signed editions, it was groundbreaking for the mystery field. Of course "literature" and "poetry" had been treated so ceremoniously before, but never crime fiction. Since then, Penzler has continued to give crime writers, and readers, the respect they deserve, both through his Mysterious Press and Bookshop.

The Bookshop is a miracle that couldn't happen today. With only $2050 in his bank account, Penzler found a partner to buy a building behind Carnegie Hall for $177,000. Penzler's contribution to the down payment was $2000 -- the other $50 he kept to celebrate. His idea was that the first floor would be all paperbacks, the upstairs all hardcovers. All the publishers told him that readers didn't buy mysteries in expensive hardcover edition. History proved Penzler right, and his good judgement has kept him at the front of the field for many decades since.

The conversation was truly great, and I could have listened all day and night to Healy and Penzler. Among my favorite parts were when Penzler gave his list of favorite books. Here's what he listed:

As Penzler's list shows, he's a man of great taste, and his publishing record is astonishing. I'm happy he won the award and very pleased that he was able to come out to NoirCon to speak. 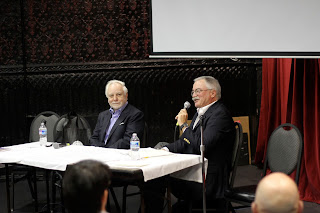 And now, some candid shots of the NoirCon crowd from throughout the day. 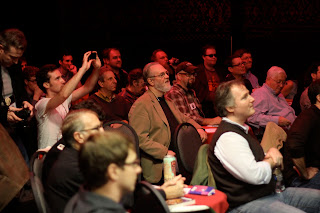 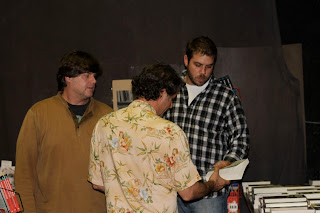 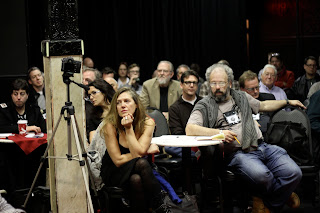 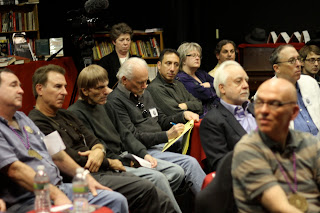 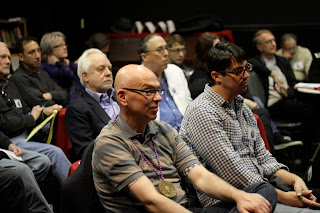