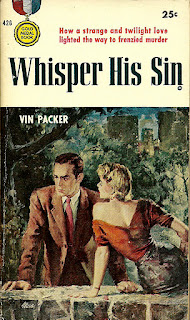 In Whisper His Sin, Vin Packer revisits the collegiate setting of her first novel, Spring Fire. Instead of following a young woman in an all-girls school, however, this time Packer writes about a young man in an all-boys school whose affair with his dormitory advisor leads to murder. But despite the similar setting and central relationship, Whisper His Sin is, in my opinion, even better than Spring Fire. Daring and innovatively structured, the novel is as beautiful as it is bleak. Each chapter begins with a snippet from a newspaper account of the crime, or an interview with someone who knew the boys, casting a mist of inevitable dread over every page. Even when things seem to be going so right for the boys, from the very first page we know just how badly things will end for them.

Whisper His Sin is loosely based on the real life Fredan-Wepman murder case, which was still a recent headline when the book came out. In this fictionalized version, the main character is Ferris Sullivan. When he was younger, Ferris was expelled from school for having relations with another boy. Since then, his mother has tried to make him “normal,” and to turn him away from poetry and fine clothes; his father, on the other hand, has just ignored him. Sent away to college, Ferris was hoping to find acceptance. Instead, he wound up sharing a dorm room with a bullying jazz-head and a muscle builder, neither of whom have any tolerance for their new roommate. Ferris’ only ally is the senior dorm advisor, Paul Lasher, whose attentions shelter Ferris as much as they single him out and bring him more shame. 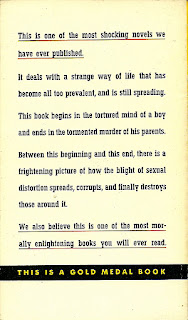 On Christmas break, however, Paul introduces Ferris to a side of New York he had never seen before, and for the first time Ferris finds himself surrounded by other gay young men like himself. Happiness is short lived, however, as a bully from their past forces a confrontation that threatens to oust Ferris and Paul’s relationship, which would not only cause a school scandal, but bring both of their personal lives crashing down. And now that they’ve tasted just how sweet life can be, the lovers would give anything—or do anything—to keep their secret safe, and to stay together.

It is emblematic of Packer that her sympathy lies with the pariahs and the outsiders, those who live shadowy lives pretending to be someone else in order to survive. In this case, they are also murderers. Packer doesn’t pass judgment on her characters or their actions. She’s more interested in exploring how social oppression and sexual repression affect a person’s mental and emotional state.

Vin Packer’s books, when looked at as a whole, are like an alternate history of the 1950s. It was a decade that we now associate with conformity, but she was looking behind the curtains, exploring characters whom society wanted to forget about, those people who didn’t conform to the norm and strived to be individuals in a world that wouldn’t let them be who they wanted to be. As Ferris’ mother tells her son, “A man who can’t walk with other men, and walk like other men, is a misfit, and a misfit is never happy! Not ever!” A palpable fear of being different runs through many of Packer’s novels, and it is clearly pronounced in Whisper His Sin. Some six decades later, society has a come a long way, but we’re still facing a lot of the same issues, and it’s remarkable to look back and see someone writing so pointedly and honestly about these issues—and, most remarkably, getting them printed. Packer’s Gold Medal books are priceless gems of subversion and social commentary, and Whisper His Sin is a marvelous example of not only her politics and sympathy, but also her meticulous craft.

Gold Medal wanted to capitalize on the topicality of the story—the front cover even advertises, “How a strange and twilight love lighted the way to frenzied murder.” (Oddly enough, the front cover shows a man and woman—perhaps showing two men together might have been too racy?) Packer, however, is not interested in exploitation. She is, at heart, a humanist, concerned with getting into the hearts and minds of her characters, understanding them as real people, unlike the world that sees them only as miscreants and aberrations.

Though the plot might not seem like something out of Woolrich or Goodis, Packer’s characters share a similar mournfulness and despair, and they’d be at home in any of those more classic noir novels.

“Hope was dried up in him, leaving a vacancy he could fill with no other emotion. Not hate, not pity, certainly not love—not even fear. Only envy now, a thin thread of it, for the simplicity of the people around him, for what he was sure they had. Dull, uncomplicated lives, minds that did not have to think, and the ability to sleep.”


Packer also goes to lengths to show that her characters, while not justified in their actions, acted out of human fear and desperation.

“Should I live my life out in a state of abject misery and loneliness, just so strangers who don’t give a hoot about me won’t talk about me? Is that a life?”


And while much of the world considered their homosexuality a sign of mental illness, Packer made it clear that her characters were not insane, weird, or otherwise mentally disturbed.

“Lasher half fought the memory because of an insidious fear that there was something sick about him and Sullivan together like that. He had never been really innocent, he reflected. Sentimental, self-pitying, yes. Soft, and by nature more than a little depraved. But not ever diseased, or deranged to the point of despising innocence, to embrace despair.”


Another of Packer’s recurring themes is that her characters—pariahs, forsaken, and murderers alike—aren’t so abnormal and atypical as one would like to think. They’re in every big city, every small town, every school, and every home. In a way, Packer is able to sneak in an ounce of hope into her novel. Maybe one of her readers feels that he or she is different and that there’s no one out there like them, no one to understand them—as Packer’s novels show, they’re not alone, and that the problem isn’t with them so much as with a society that wouldn’t acknowledge or accept difference.

“I used to feel that way too. Then I shipped out a few times. My God, was I naïve! People all over the world are like me. No matter where I go, I’ll find my own kind. I’m not such a minority as I used to think!”


Vin Packer aired the dirty laundry of the 1950s, turned social norms inside out, and made private shames into public issues. There’s still something very refreshing about the honesty of her novels, and they hold up as not only insights into their time, but also well-crafted and entertaining crime novels.

Whisper His Sin is available from Stark House Press in a two-novel anthology that also includes The Evil Friendship.