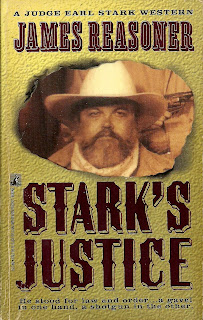 Kilroy glanced around wide-eyed at the carnage. “You killed ‘em all!”


“Just most of them,” replied Stark.

Stark’s Justice, the first book in James Reasoner’s Judge Earl Stark series, is a superbly crafted revenge Western that would have made Harry Whittington proud. Reasoner alternates between moments of fiery hardboiled action and brooding noir introspection, striking a deft balance between the two sensibilities. Stark’s Justice a hard-hitting Western, for sure, one that is filled with shoot-em-up bar fights and a raucous finale that turns a small town into a raging battle site, but Reasoner never forgets the human toll and real suffering that lies behind the action.

The book begins with “Big Earl” Stark still riding shotgun for a stagecoach and studying law books at night. When the stage pulls into Buffalo Flats, however, Stark gets his chance to prove his legal knowledge at a public hearing, starting him on a new career as a lawyer. His mind may be on law, but his heart is set on Laura Delaney, a girl he had to leave behind. Now’s that he’s made good, he wants her to join him and get married. On her journey, however, her stagecoach is held up and she is killed. Grief stricken and burdened with the guilt that had he been riding shotgun this wouldn’t have happened, Stark puts aside his new career and takes to the trail for revenge. As he hunts for the outlaws, Stark struggles to reconcile his newfound respect for the law and his thirst for vengeance. 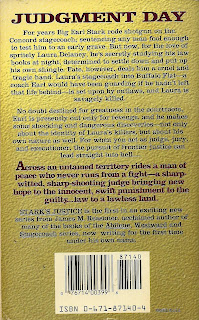 I’m a big fan of Reasoner’s books, both his Westerns and Noir/Mystery books, and here he combines the best of both worlds. Great sense of character, sweeping action, and a dark underside – I’d consider Stark’s Justice one of my favorite Reasoner books yet. This was followed by two more Judge Earl Stark books which I haven’t read yet, The Hawthorne Legacy and The Diablo Grant, and I’ve heard rumor there might be a fourth book coming sometime this year. I’m hoping that rumor is true!

Here’s one of my favorite passages from the book. Between the flopping and the blood and the noises, this has a nice Spillane-tinge to it.


“From behind him came a hideous, strangled sound. He turned, gun still in hand, to see the outlaw called Lee Roy flopping around on the floor, trying with his fingers to stem the tide of blood from his bullet-torn throat.”