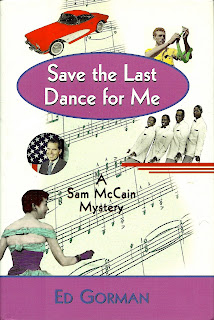 Black River Falls is the stage for a religious war in Ed Gorman’s fourth Sam McCain mystery, Save the Last Dance For Me. John Muldaur runs a radical church on the edge of town that is stirring up controversy because of their extreme views and use of rattlesnakes during ceremonies. Muldaur thinks someone is trying to kill him, so he hires lawyer and sometimes-PI Sam McCain to find out who. When McCain and reporter Kylie Burke take a trip to see the rattlesnake services in person, they get more than they bargained for when Muldaur collapses dead in the middle of his sermon. Finding the killer, however, proves difficult when McCain realizes that someone in town was secretly financing Muldaur’s church, and they’d do anything to prevent the truth from coming out. With Judge Whitney’s good friend Senator Richard Nixon paying a visit in just a few days, it is up to McCain to clean up this mess as soon as possible.

Save the Last Dance For Me is important in the McCain series for a couple of reasons. First, because it introduces one of my favorite characters: Kenny Thibodeau, the local paperback sleaze writer. Kenny dresses like a beatnik to look the part of a writer, and he does hackwork to pay the bills, but Sam recognizes that he’s got not only got real literary talent but also a great eye for humanity, both of which pop up now and then in his lesbian-themed novels. 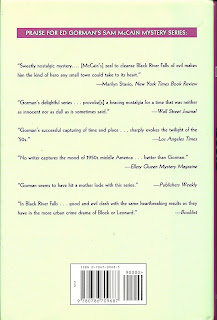 Another reason it is important is Sam’s relationship with Kylie. After finding himself caught between Pamela Forrest (he would-be lover) and Mary Travers (his should-be lover), he’s decided to move on and try to start a new relationship. The problem this time, however, is that Kylie is married. Her husband is a wannabe writer compared to Kenny, someone who goes to grad school and talks fancy and walks the walk but can’t produce anything worth while. He also treats Kylie like dirt. And there is Sam, who once again is trapped in a relationship that is doomed from the start. But we feel for him, especially because he does really care for Kylie. The tragedy is that he understands all too well what it means to hold on to a fantasy, and to give up everything to try and make a relationship work even when you know it is futile. Gorman’s books are filled with damned sad truths that we’ve all suffered in our own lives. Touches like these make the books come to life.

It might not seem obvious to call Gorman a stylist, but when you look at some of his paragraphs and sentences, there’s remarkable a subtlety, clarity, and precision to his prose. It’s style without bombast or distraction. These are some of my favorite lines from the book. The first passage, in particular, hits home—Sam and I are about the same age, so it is easy for me to identify with a lot of his thoughts and problems.

“And then at the grocery store last Saturday, everybody crowded in there buying potato chips and beer and Canada Dry mixes for highballs. I saw a lot of the kids I’d graduated with from high school. And they all had wives and kids in tow. And looked happy. And grown up. And I thought of what a mess my life was and how in a lot of ways I was still a kid and sometimes that was all right but other times it made me ashamed of myself. Maybe I’d never be Robert Ryan but at least I could be an adult like my dad. He had to quit school when he was in tenth grade to help support his family. I guess that grows you up pretty fast.”


“Sometimes, it feels sorta good to be sad. You know what I mean? But most of the time it just feels like shit to be sad. Could you turn up that song? I love it.”


“Judging by the entertainment shows on the tube, everything was just okey-dokey here in the land of Lincoln. But we knew better, didn’t we?”


“But you know something, it was quite likely that both portraits were true. We’re heroes or villains depending on who’s talking.”


The McCain series keeps getting better and better. Up next: Everybody’s Somebody’s Fool.