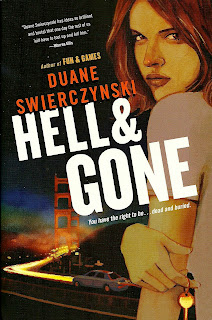 “This was a new low. Hardie’s new life was smaller and more pathetic than he ever thought possible.”

When we last saw Charlie Hardie, the ex-cop-turned-house-sitter from Fun & Games, he was having a really bad day. After arriving in the Hollywood hills to look after a house, he stumbled into an assassination attempt by “The Accident People” on has-been action actress Lane Madden and wound up on their hit list, as well. By the end of the book, Hardie was wanted by the cops for murder, and leaking blood all over the place. It didn’t seem that things could get any worse for him…but this is Duane Swierczynski we are talking about, and that dude thankfully has a limitless imagination for madness, mayhem, and dismemberment.

As soon as I opened Hell & Gone, I knew I was going to enjoy this. Who else but Swierczynski would preface a book with quotes from both Dante (in the original Italian) and Frank Stallone? It’s emblematic of the way he merges high and low culture in a dizzying, magical, and totally bonkers crime story.

(Side note: I’ve also been known to sporadically quote Frank Stallone. So, Duane, you are not alone.) 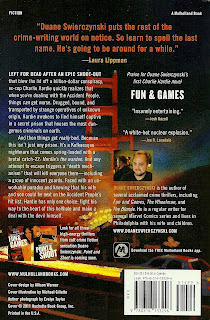 In Hell & Gone, Hardie wakes up in one of the worst places imaginable: a secret, underground detention center. Even worse: he’s the new warden. As he surveys his new surroundings, things just don’t add up. There are only four prisoners, all of whom are forced to wear masks; the guards seem more demented and violent than the prisoners; Hardie’s only communication with the outside world is to a nameless, faceless voice that comes through his headset; and the only possible exit supposedly sets off a death device that will blow-up the entire facility. Who can Hardie trust, how can he escape, why is he in charge, and—most importantly—what the hell is going on?

Once again, Swierczynski manages to top his pervious work, which isn’t an easy feat, considering the awesomeness of books like The Wheelman, Severance Package, Expiration Date, and Fun & Games. But with Hell & Gone, Swierczynski doesn’t just up the antics or the violence—actually, it’s less gory than some of his earlier work. Instead, he challenges himself to go in the opposite direction of his previous books. Whereas Fun & Games was his most epic canvas of action yet, in Hell & Gone Swierczynski takes a more minimalist approach, setting nearly the entire book in the underground prison. The location may be limited to only a few rooms, and the cast to only a few characters, but Swierczynski’s imagination is on hyperdrive, and he’s never at a loss for new ways to explore the space or to pit the characters against one another.

One of the things I like most about Swierczynski’s writing is that, even with all the action and joking going on, there’s still room for some good old fashioned philosophical inquires, like this:

“Was that something in his lizard brain, the lizard brains of all men, dating back to the dawn of time? Did prehistoric men wake up and realize how alone they were, how tenuously they clung to life, how everything they knew and loved could be snatched away from them by a smiling predator, teeth gleaming?”


Also, no matter how far-fetched and fantastic the plot becomes, the characters never lose their average-joe mentality. Even the arch villains seem like someone you’d run into at the slushie machine at 7-11.


Hell & Gone is another homerun for Philadelphia’s mad hatter of crime fiction. And judging by his track record thus far, Point & Shoot—the third and final entry in the Charlie Hardie series—is going to be even better. I can’t friggin’ wait to see what the twisted imagination of Duane Swierczynski has in store for readers next.