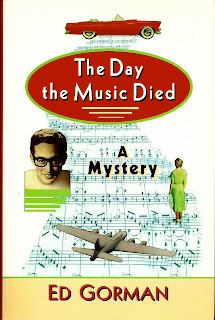 The Day the Music Died, the first book in Ed Gorman’s Sam McCain series, is now available as an eBook for Kindle. I’ve read seven of the nine books in the series, and they’re all really terrific. You can pick up the series at any point, but now that the first book is available again you might just want to start at the beginning, especially since it is so damn good and because it sets the tenor for the books to come.

The story is set in 1958 in small town Black River Falls, Iowa. Sam McCain is in his mid-20s, a recent law school graduate who pays the bills doing private eye work for Judge Esme Anne Whitney, who is charming and likable despite her class-centered elitism. Judge Whitney’s family comes from Eastern money, and they used to be the royal family of Black River Falls until Clifford Sykes struck it rich in manufacturing during World War II. Now the Sykes clan is in power, and the fat, dumb and ignorant “Cliffie” Sykes, Jr., is the police chief of Black River Falls. Whenever there is a crime, Judge Whitney asks Sam to investigate and prove that Cliffie arrested the wrong person.

The Day the Music Died also introduces Pamela Forrest—the girl Sam has loved since grade school and who doesn’t love him back—and Mary Travers—the girl who has loved Sam just as long, but whom he doesn’t love back. 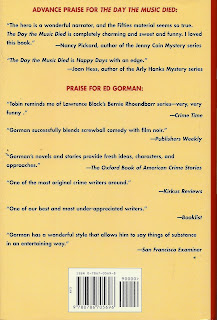 I find it interesting how often the word “nostalgic” is used to describe this series. Gorman does a great job of evoking the time period, but the Sam McCain series doesn’t revel in daydreams of how good things used to be. This is no Happy Days or Dobie Gillis. These books reveal the dark underside of small town life—the latent hate, prejudice, and resentment that courses through our neighbors’ and family members’ veins. There’s nothing heavy handed about the way that Gorman approaches domestic violence, abortion, corruption, or police brutality—in fact, considering the serious nature of many of his topics, his subtlety is downright commendable. But there’s a greater sense of an innocence lost in these books, which is why it is so fitting that the first one is called The Day the Music Died. These aren’t coming of age stories, per se, but Sam is in his mid-20s, and he still has a lot to learn about himself and about life. Throughout the novels, he comes to realize the bitter, ugly truths about life. He also experiences some real beautiful things, too, tender moments between lovers, unexpected camaraderie and newfound understanding of his neighbors.

One of the things I like about Sam McCain is that he’s a Private Eye without all the romantic nonsense. There’s something very humorous and human about his personality, and he certainly defies the hardboiled clichés. This is one of my favorite passages from the book:


“I gripped my .45 harder, feeling self-conscious. You see so much gunplay on private eye TV shows that you think it feels natural to have a gun in your hand. But it doesn’t. You’re carrying such quick-and-easy death in your hand. There’s so much responsibility, and fear. At least for me.”


Sam, like many of Gorman’s protagonists, feels a devastating sympathy towards others. He recognizes their flaws, but also recognizes the unpleasant humanity in failing, in hurting others, in making life-shattering mistakes.


“A kind of sorrow came over me, one I hadn’t counted on driving out here. I’d always hated him and with good reason. But he’d been sad this morning, human-animal sad, a creature frenzied and forlorn and crazed, and he wouldn’t let me hate him anymore, the son of a bitch, no matter how much I might have wanted to.”

This two lines I love. They show the simplicity of Gorman’s style, and the richness and depth he is able to achieve with such clear prose.


“People do strange things when they’re hurt. I think we have to keep that in mind.”

“Maybe it’s just all the sadness I see in the people around me, just below the surface I mean, and the fact that there’s nothing I can do about it. Life is like that sometimes.”