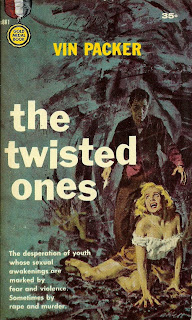 A truly frightening psychological thriller on par with Jim Thompson, Vin Packer’s The Twisted Ones (1959) is written with cold desolation and unflinching violence. Structured as a triptych narrative about a sixteen-year-old rapist, a nineteen-year-old murderer, and an eight-year-old arsonist, it is a stark portrait of how three seemingly ordinary young people are driven to murder for reasons beyond even their own understanding. Though their crimes are monstrous, Packer doesn’t treat her characters as monsters, and she gets into their heads with chilling sympathy.
It is, on the whole, a complex and prismatic look at the social, sexual, psychological, and emotional conditions that can contribute to a crime. Some of the situations are ordinary—such as an aloof high-schooler still getting used to his father’s new, and much younger, wife, or an aging momma’s boy struggling for his own independence—while others are more extraordinary—such as an eight-year-old wunderkind with photographic memory winning thousands of dollars on a national game show. But what each of these stories share in common is a deep-seated fear of being different, an unshakeable sense of isolation and anxiety, and an inevitable sense of doom. The family situations, the loneliness, and the alienation felt by the characters seems so ordinary that to witness everything snowball into murder is profoundly disturbing. Packer manages to make her criminals as terrifying as they are identifiable. 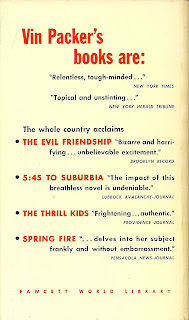 Packer is mostly known for her daring and controversial subject matter, but she was also a highly skilled writer who deserves more praise for her formal experimentation. 5:45 to Suburbia unfolds on a series of March 6th birthdays that jumped back and forth between the 1920s and 1950s, while Whisper His Sin, The Girl on the Best Seller List, and The Evil Friendship preface each chapter with excerpts from fictionalized books, interviews, and newspaper accounts. The Twisted Ones is written in seven parts, each broken down into three individual narratives (one for each of the characters) that could almost stand alone as separate short stories, even though by the end characters in one story learn about characters in the others through the newspaper and television. The clean division of the chapters both mirrors the isolation felt by the characters, but it also speaks to the synchronicity of their traumas, as well as their shared social and personal problems. Though they feel alone, their issues aren’t only their own—they are problems that need to be faced by society as a whole, which is a recurring message throughout Packer’s novels.
The big question in The Twisted Ones is—how, as a society, do we even begin to make sense of these seemingly senseless crimes? It is one thing to commit murder to get someone’s money or property, or out of revenge—but what about when even the criminals don’t understand what they did? And how do we come to terms with the fact that they are so young? Youth violence continues to be a much talked-about topic in today’s news: a few years ago it was school shootings, and now it is bullying and suicide. Packer’s novel continues to be relevant some half a century later because she faces the complicated issues of youth violence head-on, examining it from multiple perspectives, and avoiding any reductive conclusions. It’s interesting to compare The Twisted Ones to portraits of youth violence in movies at the time, such as Rebel Without a Cause. As great as Nicholas Ray’s film was, Packer’s novel is far more disturbing, and it lacks the self-destructive glamour of James Dean, Natalie Wood and Sal Mineo. There’s nothing romantic or alluring about the crimes in The Twisted Ones. The book still packs a bleak and unsettling punch, and like a lot of Packer’s novels, this one still has a lot to say to modern readers.
-------------
Cover art by Robert Abbett
at December 06, 2011 8 comments:

Calling All Noir Poets!
NoirCon 2012 is hosting their first ever poetry contest. The deadline is March 2nd, 2012.
All the pertinent details are below.
Good luck to all those who enter!

Welcome to the First NoirCon Poetry Contest sponsored by NoirCon 2012

What is Noir Poetry? Noir Poetry is (1)* Poetry that makes reference to the subject matter, dialog or style of film noir or the hardboiled detective genre, or, (2)* Poetry that invokes stark urban landscapes and atmosphere, and which either alludes to crime and perilous attachments or else seems to bear dark knowledge of this territory, or (3) Poetry that tells the story of tortured souls – lovers, psychopaths, obsessives – driven down deadly paths, following desperate plans that are doomed to failure.

What to Submit: Your entry should be your own original work. You must be the poet of the submitted work(s). Entries must be original and unpublished works (either in print or on-line). Submitted poems should concern the subject of Noir Poetry and not exceed 2000 words.

English Language: Poets of all nations may enter. However, the poems you submit should be in English. If you have written a poem in another language, you may translate your poem into English and submit the translation.

Entry Fee: The fee is $15 for 1 to 3 original, unpublished poems dealing with Noir. Entry fees are not refundable. Entries will be accepted up until March 2, 2012 (postmark dates).

Deadline: March 2nd, 2012. Your entry must be postmarked by this date.

Announcement of Winners: The winners of the first NoirCon Poetry contest will be announced the week of NoirCon 2012, November 8th, 2012. Entrants with valid email addresses will receive an email notification.

Copyright: If your entry is selected for publication in the NoirCon printed program, you give NoirCon 2012 a nonexclusive license to publish your work in our publication. You may accept or decline this invitation as you choose. Your entry will not be published in print without your consent, and you retain all rights to your work.

(*)definition by The Los Angeles Poetry Festival "Noir Corridor"
at December 05, 2011 No comments: 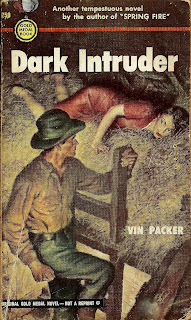 Vin Packer’s first novel, the controversial hit Spring Fire (1952), is famous for being among the first paperback originals to explore issues of homosexuality in contemporary America (in this instance, on a college campus). For her second novel, Dark Intruder (also 1952), Packer chose an even more taboo topic: incest. But as in the case of Spring Fire, Packer isn’t really interested in exploiting the subject for sleaze appeal or shock value. Instead of judging her characters as freaks of nature or perverts, Packer sympathizes with them as social outcasts: people who either can’t or won’t conform to moral standards. Packer’s gift to readers is a great sensitivity for difference, a sociological and psychological insight into human behavior, and an understanding that what is typically labeled as “abnormal” might be more normal—and common—than many would care to admit.
Dark Intruder was published by Gold Medal in 1952. Set in the town of Hillsboro, VA, the novel centers on Jett Black, the 18-year-old daughter of wealthy horse breeder Blake Black. Since her mother died during childbirth, Jett has been the only female in her father’s life. As the father-daughter-lover boundaries get thorny, however, an accident leaves Blake crippled. Enter Luke Hetherington, a temporary manager to keep the ranch going until Blake can get back on his feet. At first, Jett is resentful of Luke’s authority on the ranch, but soon she finds herself increasingly attracted to him. As Blake’s chance of a full recovery becomes less and less likely, he becomes more possessive of all things around him, not only the ranch, but also his daughter. But Jett is no longer the compliant daughter she once was, and no matter what decision she makes, no one will walk away clean from this mess. 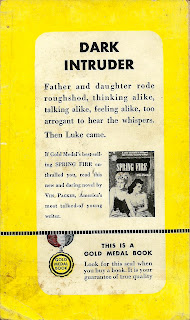 One of the things that Packer does well in Dark Intruder is to counter the “backwoods tramp” archetype. In a different setting, Jett could be like one of the young college girls in Spring Fire: naïve, confused, and full of feelings and urges she can’t control. Like the sorority girls in that first novel, Jett doesn’t sit well with the standard life-path that has been set out before her. Strong-willed and independent, she doesn’t want to go off to college—which would most likely culminate with her getting married and becoming a housewife. Instead, she models herself on her father, and wants to hold a position of social and economic power. In this sense, she reminds me of Barbara Stanwyck’s character in The Furies (based on the novel by Niven Bisch), another story of a father-daughter ranching dynasty with incestuous undertones. Ultimately, Packer doesn’t see Jett as just another myopic conception of a girl with “daddy issues”—her troubles go deeper than even she realizes. She’s a young girl who doesn’t fit in her with times or surroundings, and she acts out in the only way that seems natural to her.
Even though Dark Intruder ends with the restoration of conventional morality, just like with Spring Fire, Packer still manages to work in a lot of social criticism. Also like in Spring Fire, Packer’s representations of orthodox heterosexuality are subversive and disturbing. Jett’s first sexual encounter with Luke is particularly shocking in its violence. Packer describes Jett feeling as though “a knife of terror cut through her” when Luke touched her. The whole scene feels more like rape than love—an ironic, and complex, counterpoint to the relationship between Jett and her father. But even that bond wasn’t without its violence—their first kiss ends with him pushing her to the ground. Packer doesn’t endorse incest, but nor does she comply with standard hetero-normative partnerships, either. Her common concern with both relationships is the brutality that Jett must suffer at the hands of both men. Vin Packer was able to smartly subvert the titillating theme of the book and make some smart and progressive comments on contemporary gender politics.
While Dark Intruder might share some of the same themes of Spring Fire, it didn’t have quite the same emotional pull for me. There was something so recognizable—and surprisingly modern—about the characters in Spring Fire. Those adolescents seemed so much more relatable and realistic than anyone in the Dobie Gillis series. The confusions and crises faced by those characters were things that we all went through in our own way and in our own time. That sort of connection didn’t happen to me with Dark Intruder. Packer is such a skilled writer that I could sympathize with Jett, but only from a distance. Luke is, by necessity and design, little more than a store-window hunk—a hyper-masculine fantasy that Packer doesn’t in the least believe in. He’s there to fulfill a plot-function, not as an object of our sympathy. Blake, on the other hand, we understand a little more, but I don’t think we’re supposed to care about him, either. In his own way, he is just as misleading, confining, and corrupting an influence on Jett as anyone—or anything—else in the book.
Fifty-nine years later, Dark Intruder is still an interesting and worthwhile read. Its subversive politics and criticism of conventional gender norms make it stand out from other novels of the time, and singles out Vin Packer as one of the most perceptive and socially progressive writers of the Gold Medal lineup.
------------
Cover art by Amos Sewell
at December 02, 2011 2 comments: