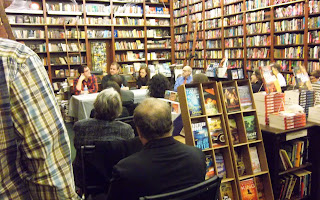 Last night at the Mysterious Bookshop in Tribeca, four of crime fiction's brightest and best gathered for a panel entitled, "The New Faces of Suspense." Discussing their latest books were Duane Swierczynski (Hell and Gone, Mulholland Books), Megan Abbott (The End of Everything, Reagan Arthur Books), and Q.R. Markham (Assassin of Secrets, Mulholland Books), with MWA Grandmaster Lawrence Block (A Drop of the Hard Stuff, Mulholland Books) moderating. When you get four writers as talented--and witty--as these together on the same stage, you know you're in for a treat. This crime fiction crew certainly did not disappoint.

Block's opening remarks referenced a Fred Allen quip about Ed Sullivan, and how anyone could do his job, even a dog, as long as you rubbed meat on the performers. Without missing a beat, Duane chimed in, wondering why no one had rubbed meat all over him yet? Block's classy retort was that, if Duane hadn't done it himself yet, there was nothing he could do about it now. All four writers had a terrific and comical rapport with one another, and they were cracking wise all night long. 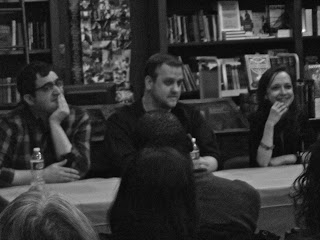 Megan talked about how at first The End of Everything seemed an unlikely follow-up to her earlier period novels, but how ultimately she was able to locate the heart of noir in the world of teenage girls in 1980s Midwestern Suburbia. Noir really is universal and inescapable! Megan's books keep getting better and better, and if you haven't read this one yet, you're really missing out! Duane discussed his first attempt at writing a sequel, and his need for creative challenges. After finishing the first book in the Charlie Hardie trilogy, Fun and Games, he decided to set the new book, Hell and Gone, largely in a prison. I haven't read this new one yet, but Fun and Games was...well, "fun and games," but the bloody, violent, explosive kind, which is precisely the kind I like! (Read my reviews of both Megan and Duane's books here at the Los Angeles Review of Books.) Q.R. Markham discussed Assassin of Secrets, the first in his trilogy about Cold War-era spy Jonathan Chase, and how it was inspired by his love for both classic espionage fiction (like Ian Fleming and Eric Ambler) and for men's action novels like The Butcher and The Penetrator. I haven't read this one yet, but I've been looking forward to it for a long time now, so I'm excited I finally was able to buy a copy at the reading! There will be a review here at Pulp Serenade once I finish it.

Some of the highlights of the Q&A included what music each of the writers listened to while working. Megan listened to what she described as music you'd hear in a 7/11 parking lot in the late '70s/early '80s, such as Mott the Hoople; Duane said he stuck mainly with soundtracks and music without lyrics; Q.R. originally intended to listen to nothing but spy soundtracks by Hugo Montenegro and Lalo Schifrin, but that wound up being too cheesy, so he such with Dub and Reggae for the first book in the series, and Samba and Bossa Nova for the second. Each of the authors was also asked to name their book of choice to convert a "literary snob" into a crime fiction fan. Megan chose Raymond Chandler's Farewell, My Lovely; Duane suggested Don Winslow's The Power of the Dog, or something by George Pelecanos; and Q.R. went with Graham Greene's "entertainments," Eric Ambler's Coffin for Dimitrios, or Chandler's The Long Goodbye.

All in all, a terrific reading! Here are some more pictures from the event. 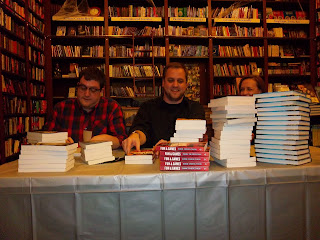 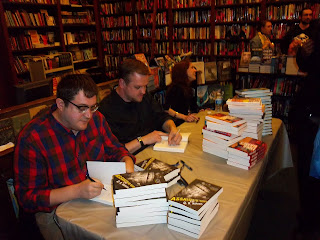 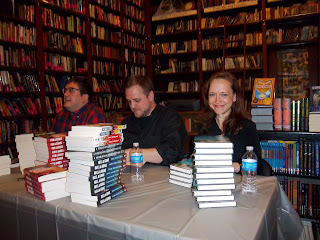 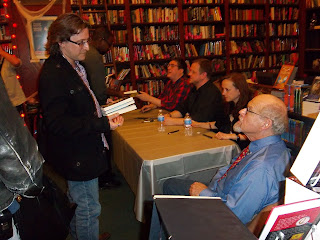 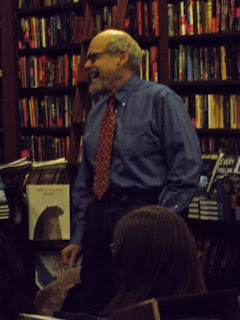 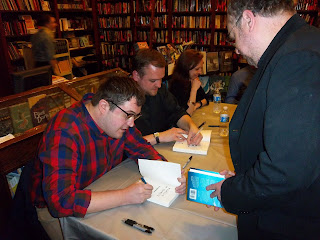 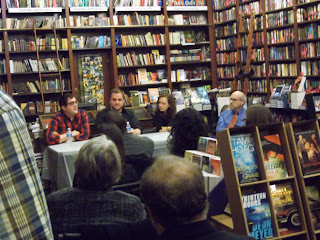 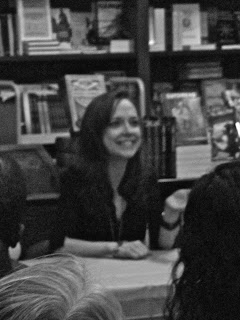 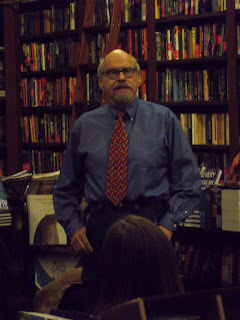 Posted by Cullen Gallagher at 11:34 AM