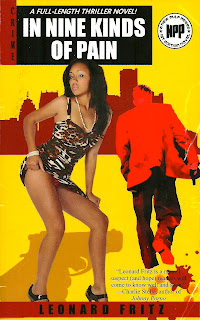 Opening Leonard Fritz’s In Nine Kinds of Pain is like stepping into the Noir Asylum for the Mentally Insane. It’s cracked-out crime fiction at its finest and most fucked up. There’s power in Fritz’s words, and every page seems capable of catching you off-guard, holding you at gunpoint, stealing your wallet, busting your nose, and leaving you bleeding, black and blue, and blubbering—in a metaphorical sense, that is. In real life, I’d never volunteer for an ordeal like that, but in a book, that’s exactly the sort of stylish bravado I want to see, and it is doubly impressive coming from a debut novelist. In Nine Kinds of Pain is ambitious, but more importantly it is also successful—not to mention batshit crazy, and pretty damn funny.

How does one even go about describing the story? It’s like an explosion of bad people, bad intentions, and bad feelings. There’s Baby, a prostitute who is left bleeding on a pile of garbage by a brutish client; now she wants to get the hell out of Detroit once and for all. Then there’s her two-timing boyfriend, Dante, who’s gotten involved with some dangerous dudes. Father Costa is an alky priest with a bad case of DTs, and whose increasingly whacked-out religious visions all center around Baby. Then you got Dallas, a desperate, horny, and suicidal cop whose wife has dumped him. Meanwhile, Dallas’ crackhead colleague, Ron Frady, is knee-deep in an a big scheme that will either make him rich or get everyone above killed.

Phew—that wasn’t easy, and even that doesn’t do In Nine Kinds of Pain justice. Fritz has constructed a story that doesn’t rely on a linear mystery. There’s only one way this story can end—and that is badly. We know “whodunit” because we’re following them every step of the way. In true noir fashion, Fritz is more interested in the motivating factors that force his characters to make such terrible, foolish decisions. Take for example Father Costa. When he turns the vestry upside-down for a bottle of anything to take the edge off, we feel every shake and every drop of cold sweat. And as his preoccupation for Baby turns into a delusional nightmare in which he plays Jesus, we walk through every Biblical fantasy alongside him. By the end, little that Father Costa says or does makes much sense in the real world, but inside his head, he is playing out a religious drama of futile redemption and martyrdom. Who knows what the rest of the world thinks of Father Costa—we never see him from their perspective. Fritz burrows deep inside the priest’s own booze-addled consciousness, and from his perspective, everything is at it should be. It’s a wild ride seeing the world through Father Costa’s eyes, and he’s only one character among many in this psycho-prismatic novel. 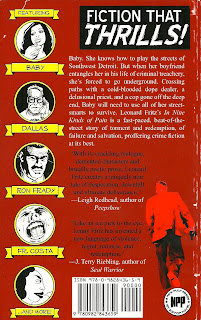 When it comes to style, Leonard Fritz can be as daring and bonkers as his characters—but he’s also a heck of a lot smarter and more self-controlled. The fractured narrative and experimental prose suggested William Burroughs, while the stream of consciousness and gutter rhapsody reminded me of Henry Miller. I mention these authors not only to suggest the sophistication and high-quality of Fritz’s writing, but also to point out that In Nine Kinds of Pain isn’t your run-of-the-mill crime fiction novel. It’s a welcome reminder of just how far-reaching, diverse, and experimental the genre can be. Fritz is an exciting and fearless writer. Throughout the novel, he breaks the narrative and delivers a series of chapters titled, “Here is Wisdom.” These are didactic, direct-addresses from an unknown narrator to the reader, talking about Detroit, the hierarchy of the streets, and the down-low on politics, drugs, and violence that contextualize the story for non-natives. It’s like a tour guide given by Travis Bickle: bitter, disgusted, intolerant, but strangely understanding and poetically perceptive. Fritz’s literary arsenal also includes comic panels (drawn by himself—damn, he’s talented!), and even a mathematical equation, to tell his story.

Call me crazy, but as dark as the book is, I also thought it was pretty funny. That’s one of the things I like most about noir—things are terrible, but sometimes you just have to laugh. And I laughed a lot when I was reading In Nine Kinds of Pain. One of my favorite passages had to do with Dallas and his failed attempt to get back with his ex, Liz. As if things couldn’t get worse for the guy, when he gets home, his neighbor’s dog is gone. The guy is so pathetic, he doesn’t even have his own dog to mourn over—he has to look across the street. Here’s the passage as written by Fritz: “He had been saddened after his date with Liz, a date that didn't go as well as he had hoped, a date in which he had pulled out his penis. He'd been further saddened when he'd returned home and had discovered that Smiley, the one true bright spot in his life, the smile in most smile-less days, was gone.”

I’m not sure whether the Detroit Chamber of Commerce should put a hit out on Fritz or give the man an award—hopefully the latter—because as vicious and vile as the city comes across in the book, it is written with such loving pride and protectiveness. You get the feeling that if anyone else said anything bad about Detroit, Fritz would be the first one to step up and defend his city. While New York City inches closer and closer towards Disneyland, Fritz’s Detroit still has an edge to it. I’ve never been to there but, oddly enough, after reading this book, I kind of want to go. (But I’ll probably stay away from the neighborhoods where Baby, Dallas, and company hang out.)

In Nine Kinds of Pain isn’t for the cozy-inclined—there’s nothing wrong those types of novels, and I occasionally want something lighter as well, but it is worth knowing what you are getting in for with this book. These characters are at rock bottom, and they aren’t redeemed by any hearts of gold or final acts of absolution. They’re addicts, dealers, prostitutes, killers, no good lovers and back stabbers. The best you could say is that they do what they have to do to survive, but even that’s a stretch. What makes them appealing to me, at least, is that when they reach the end of their proverbial rope, they all seem more alive than ever before. Their lives may suck, and they may hate Detroit, but man, they really want to hang on to what little they have. In a weird way, they value existence more than many. These aren’t boring characters. They’re not apathetic and they don’t sit down and watch sitcoms until the cows come home. They’re active and they’re crazy and they’re funny and they’re interesting as hell. Sure, they screw up their lives and everyone else’s, but at least they don’t go down quietly. There’s something wonderful about reading characters so full of life, even if it is an admittedly unpleasant one. But thankfully, even that doesn’t stop them from living—or dying—to the fullest.
at November 12, 2011