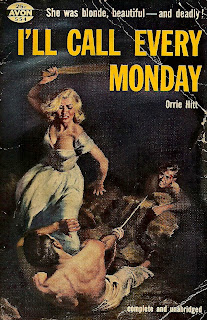 The whole world dreads Monday, but insurance salesmen look forward to it. It’s the day when they collect payments from customers, and when they can catch housewives at home alone…

I’ll Call Every Monday, originally released in Hardcover by Red Lantern Books and in Paperback by Avon in 1953, was Orrie Hitt’s first published book. The story is about Nicky Wevaer, an insurance agent caught in a web of women. First, there’s Sally Allen, a local up-and-coming singer who is stuck on Nicky because he was her first lover. And then there’s the recently widowed Bess Walters, whose husband—a colleague of Nicky’s—hung himself after getting caught impregnating a young client and also defrauding his company with phony claims. And then there is Irene Schofield, a buxom blonde whose husband is a pornographer posing as an “artist.” Luckily, he’s dying of cancer. Unlikely, for Irene, he’s not dying fast enough, and he doesn’t have any insurance. But Nicky knows all the tricks of the trade, and for the right price—and the right woman—he could make anything happen.

The influence of James M. Cain’s Double Indemnity is plain to see—how could any “adulterous insurance salesman” plot not be touched by Cain’s masterpiece—but Hitt doesn’t merely repeat the archetypical plot, nor does he mimic his forebearer’s style.

For one, Hitt throws readers deeper into the everyday life of a small-town insurance agent. We see the work at the office, the chitchat between co-workers, the late- night meetings at bars, and the wheeling-and-dealing. Hitt is working with a much larger, ensemble cast, and he is also much more concerned about developing a palpable sense of community within the novel. Social and economic networks have been central to each of the three Hitt novels I’ve read thus far (the other two being The Cheaters and Dial M For Man, both recently reissued by Stark House), and details of this sort are what makes his novels come to life, and makes them still relatable some sixty years after they were first published. Between all the co-workers, clients, spouses, adulterers, lodgers, and bar patrons, it really feels like there’s a whole town at work in I’ll Call Every Monday. 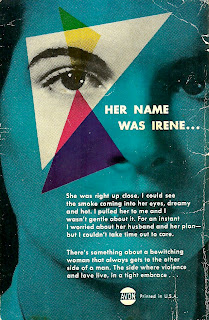 Stylistically, Hitt writes in a calm but confident manner. This is a slow-cooker of a plot that allows each of the characters to simmer until they’re red hot and ready to pop. Hitt doesn’t rush into complications, and at any given moment there are a number of different paths that the characters could take, which would send the story into whole new territories. This is one decided difference between Double Indemnity and I’ll Call Every Monday. One feels that there is never any alternative for Cain’s characters, and that they’re fated to be together “to the end of the line.” But for Hitt’s characters, the narrative feels a bit more open, which not only gives the characters a bit more freedom, but also makes them all the more reprehensible for their own downfall. Nicky isn’t a total patsy—he knows that most of the time he’s a low-down, horny scumbag, and he knows he passes over a potentially good relationship with Sally for a purely physical fling with Irene, whom he knows is hiding something from him, but he’s too busy juggling her figures to worry about that. Hitt’s male protagonists share a self-knowledge that reminds me of Day Keene’s characters—they’re not innocent victims of a dastardly femme fatale, instead they’re knowing schmucks who can’t keep it in their pants. And, strangely enough, that’s what makes them sympathetic and likable. We’ve all known someone like this at some point in our lives. Even Hitt’s femme fatales have this homegrown, small-town quality to them: their busts might be bigger than life, but their villainy certainly isn’t, and their motivations and actions are recognizable.

I also really enjoy reading Hitt’s turns of phrases. Instead of the usual “my knees were shaking,” Hitt describes Nicky’s reaction to seeing Irene like so: “My knees did things to each other.” What better way to convey someone as being dumbstruck than by, well, making them sound momentarily dumb. In a more subtle sense, there’s also the implication that Nicky isn’t even fully aware of what his body is doing when he’s around Irene. Another favorite line is, “My bank account was going down faster than a hand-dug well in dry weather.” It’s clever, precise, instantly visual, and very original. The water metaphor also brought to mind someone dying of thirst, desperate enough to do anything for just a drop of water—and that’s exactly how Nicky is acting, except it is sex, not water, that he wants. Nowhere in Hitt’s line does he talk about “desperation” and “thirst,” but it still communicates those feelings, even without the words. Being able to transmit ideas between the words is the mark of a skilled craftsman, and that’s what Orrie Hitt was: a terrifically talented writer.

Overall, I really enjoyed reading I’ll Call Every Monday. Hitt didn’t invent the “adulterous insurance salesman” archetype, but with Nicky Weaver, he certainly created one of its best incarnations. The plot is filled with colorful characters, and captures that vivid sense of homespun, working-class America for which Hitt is best remembered. All in all, it’s one hell of a first book. Mark me down as an Orrie Hitt fan—and now it is time to dig into my stack of his paperbacks that I’ve neglected for far too long.

If you’d like to read more about I’ll Call Every Monday, you should check out Frank Loose’s review, or read this piece over at Orrie Hitt: The Shabby Shakespeare of Vintage Sleazecore.
at November 07, 2011