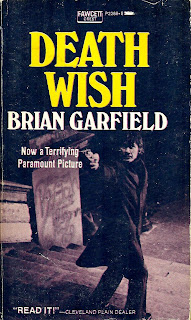 Say the title, Death Wish, and most people will think of the 1974 film starring Charles Bronson as Paul Kersey, an architect-turned-vigilante after street punks rape his wife and daughter, resulting in his wife’s death and daughter’s institutionalization.

Behind the movie, however, is a masterfully written novel by Brian Garfield. First published in 1972, the original name for Garfield’s most iconic protagonist is Paul Benjamin, and he was a CPA. The basics of the story are the same—a liberal, non-violent citizen turns into a one-man army to battle injustice and street violence—but the similarities end there. I love me some Bronson, and think that the film is one of the best New York crime thrillers to come out of the 1970s, but when it comes right down to it, the old adage is true: the book is better than the movie.

But with Death Wish, it is more than just a case of “which is better,” because Garfield’s novel has such radically different, and more complex, goals than the movie. The book directly engages in the controversy that surrounds the movie, namely, whether or not it advocates or criticizes vigilantism. Garfield’s Death Wish is not at all an action novel—Paul doesn’t even touch a gun until two-thirds of the way through. Instead, Garfield has constructed a novel equally invested in psychology, philosophy and sociology, and one as disturbing as it is revealing about our modern world. And I do mean “modern,” because even though the book is almost forty years old—and even though New York has been Disney-fied beyond belief—the issues at the core of the novel haven’t gone away. How do we deal with violence when we are victims? How do we respond to our own violent urges, and where do they come from? How do we administer justice? Torn between paranoia and guilt, fear and rage, Paul Benjamin is the moral nexus of American society, someone who so badly wants to believe in Democracy on a conceptual level, but doesn’t know how to live it in the real world. 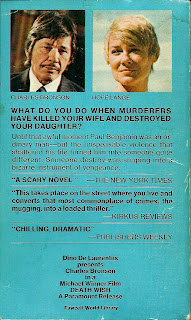 One of the underlying tropes of Garfield’s work (which unifies his Western and Crime novels) is how the introduction of sudden violence can severely alter the way a person lives and acts. It brings out the best, worst, and most unpredictable of people. In The Night it Rained Bullets, a violent outburst reveals layers of desperation and tragedy in a Western town; in Fear in a Handful of Dust, four kidnapped doctors are dropped, naked, in the middle of a desert and must balance savage nature and cunning intelligence in order to survive; and in Tripwire, set after the Civil War, a former slave-turned-soldier gets fed up with injustice and hypocrisy and sets out on a vengeance mission south of the border.

Out of all of Garfield’s work that I’ve read, Death Wish is his most lucid and profound exploration of the deep emotional, moral, and psychological ramifications of violence, from the perspectives of both victim and aggressor—and what makes Death Wish so complex and compelling is that, here, they are one and the same. It is Paul’s movement from one role to the next that occupies the bulk of the novel. “Now he had to get used to an entire new universe of reality,” writes Garfield, describing Paul’s change in perception. “Now he found himself searching every face for signs of violence.” It is remarkable, and upsetting, how the world that Paul sees—and that we see—becomes increasingly menacing, allowing for our worst fears, prejudices, and uncertainties to manifest with paranoid clarity. “The body rotted, the mind deteriorated; only the demons of subconscious fantasies thrived.”

But Garfield—and even Paul, to a certain extent—isn’t oblivious to the inner change that is going on. “It was no good pretending the soul-sucking darkness wasn’t alive with terrors. The beat of his heart was as loud as the echoes of his heels on the concrete.” This self-knowledge is something that is lacking in the movie. Bronson’s silent demeanor doesn’t allow us access to his thought process, so perhaps he is experiencing the same sorts of revelations, but if he is, he’s keeping them to himself. Not so in the novel, where we wrestle alongside Paul with his transformation. 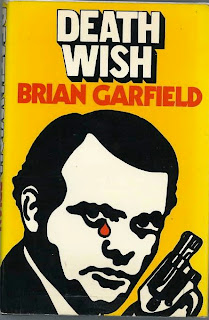 Another significant difference between the book and the movie is the representation of violence. Death Wish, as filmed by director Michael Winner, is a “thriller”—you experience an emotional rush alongside Bronson. This is definitely not the case with the book. Only the first killing is graphically depicted, but it is more nauseating than exciting. After that, the murders are brief, curt, and uncomfortably detached—which is Garfield’s way of signaling Paul’s sociopathic turn. “The second time—the man who’d tried to rob the bank—he’d felt very little; he remembered it with vague detachment as if it were a scene form a movie he’d watched a long time ago.” Garfield is even more clear with his intentions when he writes this line, which takes all the heroics out of Paul’s vigilante exploits: “He was keeping his own equilibrium only because he seemed to have been struck by the edge of the same malaise that had infected Carol—the inability to feel anything.”

Reading Garfield’s novel today, it is clear that he is not advocating for vigilantism. When I interviewed Garfield, he said how the novel was based out of his own violent reaction when he was victim to a crime, and how revolted he was by his sudden thirst for vengeance.

“The Paul Benjamin character was a sort of everyman to me. Impetus for the Death Wish story came one night in late 1971. At the time, I lived out along the Delaware River, near Lambertville NJ, and I'd driven into New York to go to a party at a publisher friend's. I parked on the street. When I came down I found that somebody had slashed the convertible top of the car to ribbons. It was about a two-hour drive home, and really cold, and I thought about finding the guy who'd slashed the roof. I never did find him, but the novel came out of it so I think I got the better of him.” 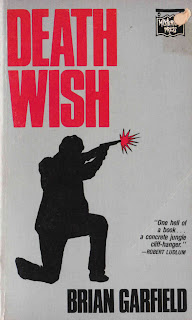 The novel Death Wish is about an inner conflict, but some interpretations seem to miss the point. From Newgate Callendar’s review in the New York Times when the book was first published, it seems that even he misunderstood the book’s intentions. Here’s an excerpt from his review:

“Men like [Paul Benjamin] are not normally men of action, no matter what catastrophe may propel them—but Garfield skillfully establishes the change in his protagonist’s character, his thinking, his world-view, then sets him to acting out the fantasies many big-city people (more and more) are beginning to feel. The fantasy of being able to stand up against ‘Them.’ The fantasy of actually living an eye-for-an-eye philosophy. The fantasy of stepping on human vermin.

“The reader’s reason may reject the basic situation, but his emotion cheers it on. That is because Garfield is so very plausible. ‘Death Wish’ is a scary novel about life and death as experienced through the feelings of a citizen in a crime-ridden New York.”

Callendar was right that Death Wish is “scary,” but what he didn’t get is that Garfield wasn’t embracing these fantasies. He was busting the mythology of violence wide open, and taking the romance out of crime fiction. When Garfield started out writing Westerns, he changed the way the genre worked, the types of characters that were around and the physical spaces they inhabited. He’s a realist, interested in real people and real places. Sure, Garfield can entertain the hell out of you when he wants to, construct a breathtaking plot and put it into motion at breakneck speed, but he’s a great writer with original ideas and a unique voice.

It’s a shame that Death Wish hasn’t been reprinted since 1989. Like many of Garfield’s books, they’re only circulating in used editions. But just last month, Mysterious Press announced on their website that they’ll be bringing out new eBook editions of many of Garfield’s work, and Death Wish is included on the list. Hopefully this will win new audiences for Garfield’s book, and win Death Wish the critical acclaim it deserves.

Until the eBook is released, here is one of my favorite passages of the book, which reflects on its own relationship to Westerns:

“He turned on the TV and sat down to watch it. One of the local unaffiliated channels; a rerun of a horse-opera series the network shad canceled years ago. Cowboys picking on sodbusters and a drifting hero standing up for the farmers against the gunslingers. He watched it for an hour. It was easy to see why Westerns were always popular and he was amazed he hadn’t understood it before. It was human history. As far back as you wanted to go, there were always men who tilled the soil and there were always men on horseback who wanted to exploit them and take everything away form them, and the hero of every myth was the hero who defended the farmers against the raiders on horseback, and the constant contradiction was that the hero himself was always on horseback...”