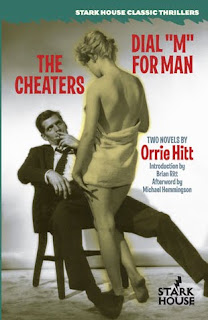 Every time I look at my shelf, I’m thankful for Stark House Press. Greg Shepard and his colleagues tirelessly endeavor to find the hidden gems of American literature—the forgotten classics, should-have-been-hits that fell between the cracks, the critically misrepresented, and the underdogs that never got their due. Orrie Hitt is all of these and more, and now he joins Stark House’s esteemed roster that includes Harry Whittington, Gil Brewer, W.R. Burnett, A.S. Fleischman, Margaret Millar, and Robert Silverberg. This new anthology includes The Cheaters (originally published in 1960 by Midwood), Dial "M" For Man (originally published by Beacon in 1962), as well as introductions from Hitt's children and Brian Ritt, an afterward by Michael Hemmingson, and a complete bibliography of Hitt's work.

Half a century after most of his books were published, Orrie Hitt still carries the stigma of the “sleaze” genre. But, as Brian Ritt points out in his introduction, this “allowed him to portray a side of American life not dealt with in the mainstream media during the 1950’s.” Upon first publication, Hitt’s milieu might have been thought of as licentious, but today his characters just seem real, and all too relatable. They’re working stiffs sick of their day job, tired of their home life, and bored with their surroundings, and they resort to alcohol and sex to take their mind off the monotony and dreariness of their everyday life. Hitt is not an idealist, and his characters are as imperfect and morally bankrupt as the world they live in.

In The Cheaters, young lovers Clint and Ann leave their farm-town of Beaverkill, NY and wind up living in the slums of Wilton, known as “The Dells.” Ann works by day in a diner, while Clint spends his nights tending bar. Soon, he finds himself caught in a web of small-time vice that could lead to big-time problems. There’s the bar’s owner, a fat pimp named Charlie; his buxom, hot-to-trot wife, Debbie; and a corrupt cop with his eyes on Debbie, Red Brandon. When Clint sees his chance to dump Ann, grab Debbie and the bar, and get rid of Charlie and Red, he decides to put everything on the line… 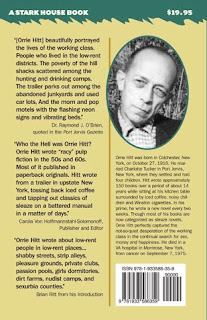 Dial “M” For Man is about Hob Sampson, a twenty-something with his own TV business, a deadbeat business partner, and a frigid, virginal girlfriend. All that changes when he makes a house call on Doris Condon. Her husband, shady business tycoon Ferris Condon, stands in the way of everything Hob wants: he blocks Hob’s bank loan to improve his shop, and he won’t let go of Doris. Sick of his shop, his girlfriend, and his partner, Hob decides to clear out of Hawley, NY once and for all—but not without Doris, and not without exacting revenge on her scheming husband.

Both The Cheaters and Dial “M” For Man are finely crafted novels, blending squalor, suspense, and social realism. The world that Hitt resents is more recognizably human than in many of his contemporaries’ books. Hitt is like William Inge, but with less melodrama, and with more crime and depravity. And forget about the “sleaze” label—these two novels are 100-proof noir, as potent as any of the more celebrated stuff coming out from Gold Medal or Lion. Hitt’s characters are lost in their frustrated desires, unable to get anywhere new and unwilling to go back to where they came from. Instead of digging up and out, they only dig themselves deeper into the grave. Their motivations are the stuff you find sitting next to you on the bus, or behind you in line at the store—working man’s noir. Read this little excerpt from The Cheaters and see what I mean:

“Several times I tried calling the apartment but when I did he answered and I hung up, my hands shaking and my guts tense and tight. All I had to do was think about her and I was a wreck, a hopeless ghost of a man who was blinded by all of the love that was being lost. More and more I turned to the bottle, seeking from the bottle the answers to the thousands and thousands of questions that kept churning around inside of me. I didn’t find any answers. I got drunk and stumbling and I didn’t care whether I worked at the bar or not.” 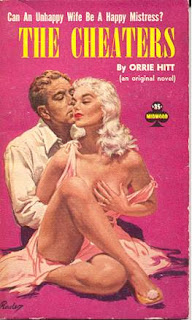 One thing you can you say about Hitt’s characters: they really go to work. In both books, the day-to-day grind of the job is intimately detailed. Hitt is deeply invested in the notion of work as few authors are. There’s a lived-in, worked-in quality to Hitt’s novels that is unmistakably authentic—the tedium, the irritation, the slog, and the disappointment is utterly real. There’s the sense that his characters have to work for their dollar, for their booze, and for their rent. Not one aspect of daily life is overlooked or taken for granted. There’s a palpable sense of poverty, hunger, and destitution on every page. As Hitt writes in Dial “M” For Man: “Living with her would be constant excitement. Yes, living with her, giving her children—but how would I be able to pay the bills? Poverty, stark and real; she would not want that and neither would I.”

Real-world worries distinguish Hitt’s plots and give them their distinctive edge. He invests classic suspense scenarios with working class woes, and the result in both books is a story as fantastic as it is believable. On the one hand, Clint and Hob find themselves living out their big bosomed fantasies and their paranoid nightmares, but at the same time, they’re never fully divorced from the concerns of putting a meal on their plates or paying their rent. Call it noir neorealism with a little added sex—Orrie Hitt’s 1950’s make many novels of the time seem like vanilla ice cream in comparison.

Another aspect of Hitt’s novels that I love is his style. There’s a natural, unlabored flow that reminds me of Harry Whittington (though Whittington is, on the whole, much more intense). Hitt had a clever sense of humor, and he rarely resorted to clichéd expressions, instead creating his own distinctive style. For example, “She dripped sex like a leaky faucet,” (The Cheaters) or “She had a low voice, hot and sultry, the kind of a voice that could sell bathing suits in the middle of winter” (Dial “M” For Man). Even when Hitt is trying to be sexy, there’s frequently an underlying nuance of poverty and struggle, such as this line from The Cheaters: “She was the kind of a girl you could starve to death with and not mind it at all.” In fact, that is precisely the future that Clint sees for himself unless he can find a way to pay-off Red Brandon. 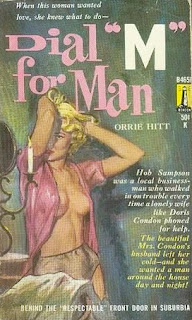 When it comes to plotting, Hitt doesn’t rush head-first into trouble, and instead lets the situations develop slowly. Both The Cheaters and Dial “M” For Man are more about the build-up than the pay-off. Don’t get me wrong, both have terrific and surprising finales, but Hitt dispenses with conclusions rather quickly. He’s more interested in how—and why—his character get themselves in such a rut. Two of the driving motivations are summarized by Hitt himself:

“I’ve got a bull by the tail here but I’ve got to hang on. If I let go now there won’t be another chance. There’d be just jobs here and jobs there and I’d end up floating from place to place, never earning very much and never being sure what I was going to do the next day.” (The Cheaters)

“How bored can you get and still live with yourself?” (Dial “M” For Man)

Hitt’s characters are as restless as they are in need of a rest. The male characters are afraid of commitment, and frequently realize that they’re no good sleazebags. As the narrator of The Cheaters admits, “I was making big money in The Dells but I was just as bad as the prostitutes who worked out of the bar.” The female characters, in particular, are ready to settle down, but they don’t want to settle for less than they feel they deserve. While many of the women are too easily forgiving of the men and too quickly accept the role of a martyr, Hitt never forgets the hardships they faced in order to maintain their independence. They’re smart, savvy, and world-weary from a very young age. Only the femme fatales—Doris and Debbie—come off as thinly characterized (but “fully” developed, physically speaking) archetypes. But these are also the characters Hitt spends the least time with—he’s obviously not interested in them, nor does he sympathize with those who exploit others for personal gain. His loyalty is with the underdogs, the losers, and the workers.

Two days ago, I was new to Orrie Hitt. Today, I’ve read three novels by him. Not only the two books reprinted by Stark House, but also I’ll Call Every Monday, Hitt’s debut. And sitting by my side is another Hitt novel, Shabby Street. Yup, I’ve been bitten by the Hitt bug, and I’m a happier readier because of it. On page one, I knew I would enjoy Hitt's work, and by the end of the collection I knew I had found a new favorite author.

Thanks, Stark House, and keep up the excellent work!