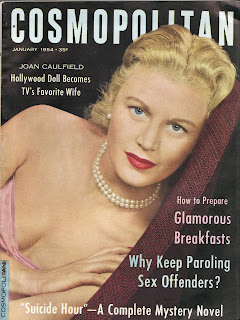 “Then, last evening, paradise had caved in.”

Charles Williams is best known as one of the top tier noir novelists of the 1950s and 1960s, having published classics for Gold Medal like The Long Saturday Night, but he was also a short story writer. “The Strike” originally appeared in the January 1954 issue of Cosmopolitan. In contrast to Williams’ novels that I’ve read, “The Strike” is strikingly different. While it’s not noir, it’s not quite not “not noir,” either. Williams begins with a quintessential domestic scene that could have started any number of noir stories—an evening at home between a fed-up wife and her neglectful husband—and then gives it an unexpected twist.

All Mr. Courtney cares about tonight is his No. 12 Hendrickson fishing tackle. While he dreams of the trout he’ll be able to catch with it, across the room Mrs. Henderson is tired of reading the paper to herself. After several failed attempts at starting a conversation, she’s decided she’s had enough and is going to do something about it.

“What about my uranium?”

That sure got his attention!

I won’t give away any spoilers, but the story takes some surprising, and very enjoyable, turns. Williams’ superb craftsmanship shows in his tonal dexterity, economic wordplay, and ability to switch moods at the drop of a dime. Alternately tense and comical, “The Strike” is a finely spun tale, and features excellent illustrations from Alex Ross, a regular artist in Cosmopolitan from the 1940s through the 1960s.