Louis L'Amour on Words and Writing 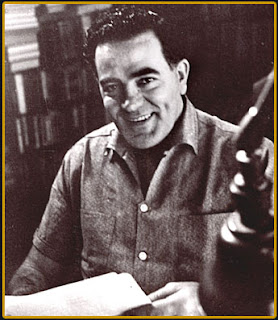 Excerpted from "The West Lives On in Louis L'Amour" by John Riley, from the Los Angeles Times, Oct 19, 1975.

He [Louis L'Amour] writes three or four books a year. Every morning at the breakfast table he reads the classics to his wife, Kathy, an ex-actress, and his son, Beau, 14, and daughter, Angelique, 11. The rest of the day he reads western nonfiction from a huge collection of journals and periodicals and histories. And he writes. He seldom researches any one book specifically. He has set himself the goal of swallowing the West whole and regurgitating it as one long, linked masterwork. Currently, his project is a 40-volume cycle showing three families, the Chantrys, Sacketts and Talons. The hero of "The Man From the Broken Hills" is half Talon, half Sackett. Ten of the three-family cycle are complete.

"The terrain is always an important factor," he says. "In those days, you couldn't go form here to Phoenix without worrying about where you could get a drink and where you'd camp tonight. And where the Indians might ambush. I always write about real places. I go to a great deal of trouble to find about that place."

"Nothing begins here," he says. "Always in the past writers seemed to write about The West in capitals as a place in limbo, a kind of never-never land where things happened that had no relationship to the rest of the world at all. Well, I don't like that at all. People were coming and going from the West. There was a man named Oliver Wallop who ranched up in Wyoming for 30 years and then went back to England and took a seat in the House of Lords. Men came in and went out contributing and taking from it. Like Teddy Roosevelt coming West a sick man and going back East healthy with the western spirit in him."

Email ThisBlogThis!Share to TwitterShare to FacebookShare to Pinterest
Labels: Louis L'Amour, On Words and Writing, Western