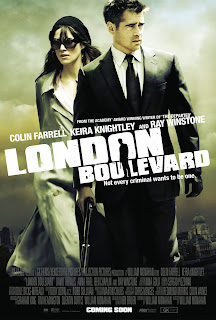 “I was a criminal. Presently, I’m just unemployed.” So explains recently released ex-con Mitchel, played by Colin Farrell in the movie adaptation of Ken Bruen’s London Boulevard. The movie, written and directed by William Monahan (writer of The Departed), is hitting theaters later this year, but for the time being you can rent it online via Amazon for ten bucks. Unless you are a die-hard Ken Bruen fan, however, you might want to hold off. Maybe my hopes were too high, but London Boulevard was overall a disappointing movie.

The story is about Mitchel (Farrell), who was arrested several years ago for killing a man. Now that he’s out of jail, his old gangster connections want him back in the business, but Mitchel doesn’t want to go down that path again. Instead, he takes a job as a handyman/bodyguard for high-profile actress/painter Charlotte (Keira Knightley), who is being hounded by paparazzi. Big-shot gangster Gant (Ray Winstone), however, won’t let Mitchel out of the business that easily, and soon he begins threatening those closest to Mitchel. As much as Mitchel would like to walk away, he is caught not only because of his growing affection for Charlotte, but also the gnawing desire to find the young punks who killed an old friend of his and exact vengeance.

London Boulevard is an awkward movie. It tries to marry an unconventional narrative (without a central, driving mystery or satisfying closure) with more mainstream stylistic tendencies. Not having read the original book, I can’t comment on how faithful or not the movie is, but on the whole the movie lacks the brutal charm, intelligent wit, and aesthetic grace that one finds in all of Bruen’s writing. It’s like Monahan wanted to take Bruen’s black-and-blue-and-boozy world and give it blockbuster appeal. The resulting movie is too slick and not gritty enough. It's noir lite. 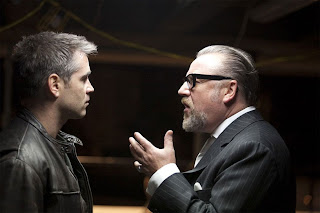 Ray Winstone, as expected, is great fun as the big, bad gangster. And even though Keira Knightley and Colin Farrell surprised me with low-key performances that were at times decent, ultimately they were inconsistent and not always in-tune with the rest of the movie. Farrell’s pretty-boy looks soften his character and he doesn’t quite reconcile the sensitive, Rilke-quoting part of his character with the brutal gangster façade. Knightley’s character, Charlotte, gives a speech about how she doesn’t like acting in most movies because she is either a sex object, or just a sponge that soaks her up male co-stars’ brooding backstory. That’s all well and good, and Charlotte’s character certainly avoids being either of those stereotypes…but her role never coalesces into anything that feels real, and her romance with Mitchel is a little too sweet and naïve for my tastes. 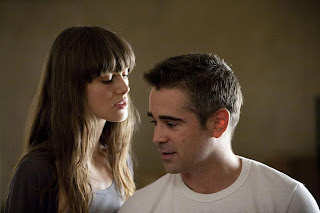 Some reviewers online were complaining about the lack of plot resolution and character redemption. Clearly they haven’t read Bruen’s work before. He’s not interested in such stock conclusions or easy answers, and I’m glad that Monahan at least tried something similar with his movie, even if it doesn’t work. Emotionally, he doesn't pull it off, and in terms of pacing, everything concludes a bit too quickly. Perhaps had Monahan showed more of the violence without flinching or cutting away right before the blood splatters, the nihilistic turn at the end might have carried more weight. As is, the final scene seems more like a punch line rather than the gut-punch it should.

Even though it wasn’t very good, I still was able to enjoy parts of London Boulevard. The story premise is solid, and Ray Winstone is always fun to watch, but this is far from the perfect cinematic evocation of Ken Bruen that we’ve been waiting for. Blitz (which I will review later this week) is a much better movie, and hopefully there will be even more adaptations in the future that will continue to improve.
at October 10, 2011