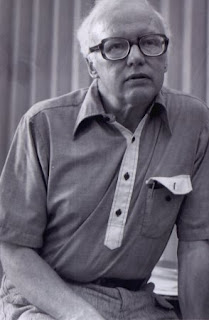 Recently, I came across an in-depth article on John D. MacDonald from around the time of the movie adaptation of Darker Than Amber. "The man who writes those Travis McGee stories: A look at John D. MacDonald" was written by Mike Baxter and was published in The Washington Post Times Herald on Feb 1, 1970. It was a fairly lengthy article, but below are excerpts of some of the most insightful parts:

[Mickey] Spillane visits [John D.] MacDonald's home at intervals, and both write mysteries. As craftsmen, however, they are as close as Eldridge Cleaver and Sam Spade. Even Spillane can recognize the gulf. "I am a writer; you are an author," The Mick once told MacDonald. There is more in that than semantic nonsense.

MacDonald writes on a beige IBM Selectric as if Doom were about to unplug it in the last great denouement…He devotes a business-like seven-to-nine hours a day writing, doing it until the lunch hour, then doing it again until the cocktail hour. Fast subtraction shows that this leaves "too little time, dammit" for other pursuits.

MacDonald can pension McGee off without affecting his workload. While completing McGee No. 12, he is working on three other novels in his unorthodox way, moving from one to another at the first outbreak of boredom.

He writes without outlining, weaving intricate plots and large casts into the empty middle separating a known beginning and a known climax.

He writes on expensive 25-pound bond paper. "I think the same situation is involved as with painting and sculpture. If you use the best materials you can afford, somehow you have more respect for what you do to it."

He seldom edits with pencil. "I rewrite by throwing away a page, a chapter, half a book, or go right back to the beginning and start again."

He is also a happy writer, another unorthodoxy. "I enjoy the hell out of writing," he said, "because of the rare times when it really works good. It's like an East egg hunt. Here's 50 pages, and you say, 'Oh, Christ, where is it?' Then on the 51st page, it'll work. Just the way you wanted it to, a little better than anything in that same area ever worked before. You say 'Wow! This is worth the price of admission'."

Email ThisBlogThis!Share to TwitterShare to FacebookShare to Pinterest
Labels: John D. MacDonald, On Words and Writing