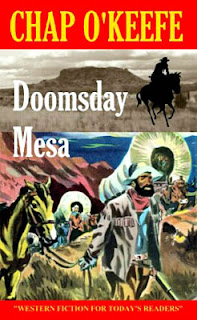 Originally published as a Black Horse Western in 1995, Chap O’Keefe’s Doomsday Mesa has long been out of print. Thanks to the e-book revolution, it is now available for Kindle. I greatly enjoyed the first Chap O’Keefe book I read, Misfit Lil Cheats the Hangrope, so I was excited going into Doomsday Mesa. It certainly lived up to my high hopes, but it also showed a different side of O’Keefe. From the opening pages, Misfit Lil Cheats the Hangrope was laced with action, humor, and mystery. Doomsday Mesa shows a darker side of the West. It’s not a pretty picture, but neither was life in the old West. O’Keefe mixes the bitter truths of Western history (the Donner party cannibalism tragedy and the Sand Creek Massacre) with a compelling fictional narrative, and the result is another winning Western drama from veteran author O’Keefe.

The protagonist of Doomsday Mesa is Yale Cannon. Once a wild, gun-toting youth, he matured while fighting for the Union in the Civil War and was eventually appointed as a Deputy Marshall. He may be older, wiser, and grayer, but he hasn’t forgotten his youth—or the girl he loved, Jane Bell. So, when he is ordered to proceed to Antelope to bring back wanted murderer William Effingham, he decides to find out what happened to his old crush. But the town of Antelope has other plans in mind for the Deputy Marshal.

Arriving in Antelope, Cannon is mistaken for a cattle rustler cultist and narrowly escapes a showdown. Investigating the matter further, Cannon discovers the town’s boiling resentment towards Brother Abel Anson Pryor and his followers who have taken over Jerusalem Pastures, which the locals are now calling Doomsday Mesa. Meanwhile, Cannon seeks out the town elder, Reverend Ephraim McDowell, and his daughter, schoolteacher Kate, to learn about Jane Bell. Disaster looms, however, as tensions between the townspeople and the cult reach the breaking point, and Cannon finds himself caught between two firecrackers—Effingham and Pryor—and must save Kate’s reckless younger sister, Rose, before she becomes victim to her own naïve delusions. 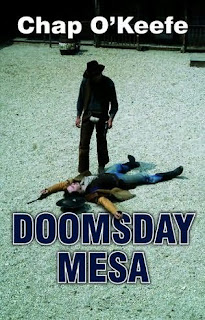 Doomsday Mesa is a lean book written in tough, compact prose that packs in a lot of drama in short space. Don’t let the size of the novel fool you—O’Keefe has assembled a terrific ensemble cast whose individual stories weave together a complex narrative layered with drama and anticipation.

As with the Misfit Lil books, O’Keefe excels at crafting rugged, independent, and believable female characters that defy stereotype. Kate doesn’t fit the conventional mould of a schoolmarm whose spinster ways melt at the first sight of the hero. Far from it! Kate is a forthright suffragette, and even occupies a position as one of the town’s leaders, but she’s also cognizant of the weight of her responsibilities, both to the town and to her near-blind father, whom she looks after. And of all the characters in the book, Rose is perhaps the most relatable, human, and vulnerable of the bunch. Young, brash, and a romantic at heart, she longs to run away with her lover and rebels against everything her family stands for. How many of us were like that in our own youth? Locating those universal emotions in his characters is what makes O’Keefe’s West so compelling and relatable. He doesn’t treat the West as some static, dusty entity, but engages with the emotional and moral issues the way real people would have.

Doomsday Mesa is a good way to get to know O’Keefe, and now’s the perfect time, as Gary Dobbs over at The Tainted Archive is offering a 2-for-1 promo deal with O’Keefe’s eBooks. See his blog for official details.

Here are some of my favorite quotes from Doomsday Mesa:

“Cannon was merciless. His first shot took one of the gunnies in the leg. He was jerked off his feet, blood bubbling from a shattered kneecap. Flung raglike to the ground, he writhed and mewled helplessly, churning the dust to a chocolate mud beneath his broken limb.”

“Atop the rim was a big mesa, covering many thousand acres. Part of it was grassland, but the lately titled Jerusalem Pastures did not live up to the promise of their name. The tableland was poor farming land. Nature had been in a mean mood when she fashioned this rocky section. The mesa was riven by deep, treacherous canyons – and it had not been improved by the scars of more abortive mine workings.”

“Cannon barged past him. Though the crashing of guns had ceased, a wild sound of arguing voices swelled from the saloon. The whole building seemed crouched like a wounded dog cringing in the shadows at the side of Main Street, growling and gathering itself up for another frantic leap into gut-ripping violence.”
at October 06, 2011