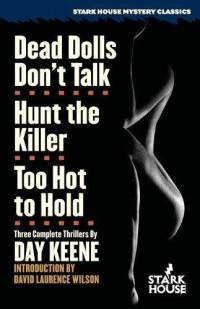 Stark House Press returns with one of their strongest collections yet, a triple-header of 1950s noir from the incomparable Day Keene: Dead Dolls Don’t Talk, Hunt the Killer, and Too Hot to Hold. These are sweaty, grimy, relentless thrillers that capture Keene at his zenith—masterfully concocted plots, breakneck pacing, and some of the sleaziest characters you’ll find in 50s paperbacks.

The protagonists in these stories are all “average joes” —Keene’s stock-in-trade—whom fate, or coincidence, has thrown for a deadly loop, but none of them are entirely innocent. Keene’s characters are remarkably mature in their self-awareness. They know they’re philandering dirtbags and no-good heels, and they don’t pretend for a moment they’re any good. But that’s what makes them so sympathetic and, oddly enough, relatable. It’s easy to see how they’re lead down the path, and how they engineered their own doom. Coincidence and bad luck play a big role in each of the plots, but the majority of the blame likes squarely with the protagonists themselves: guys who want sex and booze so bad they’d screw up everything right with their lives just for one wild fling. We’ve all known someone like that, and that’s one of Day Keene’s formulas for success. Everyday people in everyday situations gone massively out-of-hand—our craziest dreams turned into living, breathing nightmares. 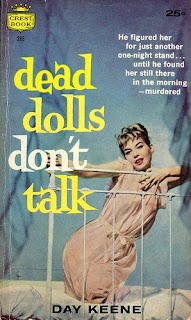 Dead Dolls Don’t Talk (Crest, 1959) follows a juror who learns the hard way what it means to find yourself on the wrong side of the law. Hours after returning a verdict of “guilty” in a murder case, Doc Hart wakes up next to the condemned man’s wife…dead wife. On the run and wanted for murder, Hart’s only friend is Gerta, the young woman from his shop whose affections he turned down in the past. Together, the two of them head to Mexico to unravel an increasingly complicated scheme that looks harder and harder to prove.

Hunt the Killer (1951, Avon)—my favorite of the bunch—is about a Florida smuggler, Charlie White, who is released from prison only to walk immediately back into the same trap that put him there. Only this time it’s not smuggling he’s wanted for, it’s murder. If only he could figure out the identity of his mysterious employer, Señor Peso, he’s sure he could prove himself innocent.

Too Hot to Hold (1959, Gold Medal) is about a dissatisfied husband whose dull life takes an unexpectedly exciting turn when he steps into a Manhattan cab one rainy morning. In the back seat is a suitcase filled with more money than he’s ever seen before. There’s no identification tag, so he’s takes it, and soon finds himself a mob target. Meanwhile, back at home things are headed for disaster as his nympho daughter threatens to make a scene if he doesn’t sleep with her, and his spiteful wife is on the warpath about his obtuse behavior. 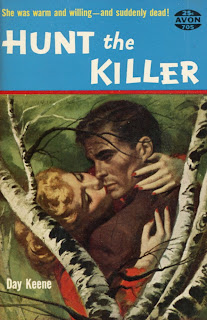 If you’ve never checked out Keene before, this is the perfect place to start. Not only are all three books top of the line noir, but David Laurence Wilson’s meticulously researched introduction is a must read. Keene, whose real name was Gunard Hjertstedt, is one of those writers who didn’t leave too many clues about his own life behind him, and Wilson’s essay sheds light onto one of the author’s biggest mysteries—himself. Exquisite literary taste and impeccable scholarship make Stark House not only one of my favorite contemporary publishers, but also one of the most reliable out there today.

One thing you can always count on Day Keene for: killer openings. He knows how to hook a reader from line one like nobody else, and the beginning paragraphs to each of these three novels are some of his best. Take a look and if you like what you read, check out Stark House Press’ website for more information. 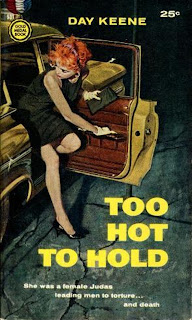 From Dead Dolls Don’t Talk:
“There was no boy and girl business about it. Both of them knew what they were doing. It was a thoroughly adult and sordid affair involving proven lewd and licentious conduct, resulting, so the State alleged, in murder:

"The man’s name was Harry L. Cotton. He had been a professional aerial crop duster. He was big. He was young. He had a way with women.”

From Hunt the Killer:
“It was hot. It was dark. The cell block smelled of men sleeping with dreams. Men without women for years. Of fear and despair and frustration. Night after night, alone. Three walls, a high window, iron bars. A hard, narrow cot—and you. With disinfectant replacing affection. A small squirrel in a big cage. Staring hot-eyed into the dark. Wanting a drink. Wanting a woman. Trying not to blow your top. Hysteria building up inside you.”

From Too Hot to Hold:
“Although his actual physical death didn’t take place until two days later, Mike Scaffidi began to die the moment he picked up a fare in front of Grand Central Station at exactly 9:25 on the morning of November 3, 1958.”
at October 03, 2011