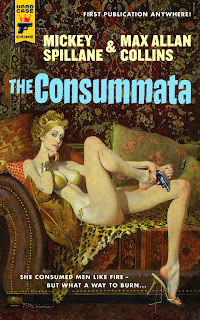 “Baby, I wasn’t made for this world.”

“Possibly it wasn’t made for you either.”

Forty-four years after he was first introduced to the world in 1967’s The Delta Factor, Mickey Spillane’s one-off character Morgan the Raider makes an encore performance in The Consummata (now available a paperback or ebook). Unfinished at the time of Spillane’s death, The Consummata is the fifth book to be completed by the author’s long-time friend and collaborator, Max Allan Collins, and the second to be published by Hard Case Crime (the other being the excellent Dead Street). In all of the Spillane/Collins books that I’ve read, it’s been impossible to pick the point at which one author’s work ends and the other’s begins. It’s a seamless melding of voices and ideas.

Not being familiar with The Delta Factor, the first couple of chapters of The Consummata was a bit rocky for me. Spillane/Collins had a lot of backstory to convey, but once all the bases were covered the pacing picked up and didn’t slow until the last corpse fell.

Morgan the Raider is a modern-day pirate, but he steals only from governments, gangsters, and other sources whose wealth comes from corrupt means. As the book begins, Morgan is running through Miami’s Cuban neighborhood, being chased by CIA agents who think he stole $40 from the US Government. Coming to Morgan’s rescue are a group of Cuban immigrants who have heard about Morgan’s reputation and want to hire him to locate Jaimie Halaquez, a double agent for Castro and the CIA who ran off with $75,000 intended to help fellow Cuban exiles. The only clue as to Helaquez’s whereabouts is his proclivity for S&M. But with rumors of an elite party thrown by high-priestess of bondage with spy connections back to WWII—The Consummata—Morgan knows Helaquez will show his head eventually…now he just has to stay out of the CIA’s clutches long enough to get his man.

Compared to Spillane’s more famous protagonist, Mike Hammer, Morgan isn’t quite as prone to violence. But while there might not be any punks bubbling on the floor or brains splattered against walls, Morgan does perform one Spillane/Collins’ most humorous executions: death by toilet swirly. And when it comes to his libido, Morgan also shows a bit more restraint. Overall, Morgan is more moderate than Hammer, which for some readers might be more appealing. Personally, I prefer the extremity of Hammer’s personality. Still, Morgan has that irresistible macho charm—he’s good in a fight, better in bed, and capable of tackling any adversary, whether government, gangster, or your garden variety goon. He’s the male action fantasy writ large—just not quite as large as Hammer.

Morgan’s adventure leads him from Cuban mom & pop grocery stores and seedy, bombed-out hotels to labyrinthine brothels and out-of-this-world sex parties. It’s a doozy of a thriller and a helluva lot of fun to read. Thanks to Max Allan Collins for making sure Spillane’s legacy carries on with such strong volumes.

And I couldn’t end the review without mentioning Robert McGinnis’ exquisite cover. Wowzers! And I don’t just mean the lean limbed babe with the gun, either. The wallpaper, couch, and whole décor is beautifully designed. Just when you think Hard Case has released their best cover, they top themselves yet again.

Here are some of my favorite quotes from The Consummata:

“The Cuban kitten was rising and turning and leaning against the wall with her hands flat against the tile, glancing back at me with sultry insistent invitation, offering the rounded cheeks of the most perfect posterior that fool Castro ever banished form his country.”

“That Muddy was having a piece of pie did not surprise me. That he could eat that way, and carry all that weight around, and still find clothes that looked baggy on him, remained a mystery.”

And this well-crafted gem which almost reads like verse:

“You can’t buy it. And you can’t avoid it. It finds you, and does its capricious thing, a coin flip coming up tails and giving you the bad luck of getting clipped by that coke freak, only to come up heads and let you survive, with just a minor concussion, cuts, abrasions, and a couple broken ribs. No internal injuries at all.