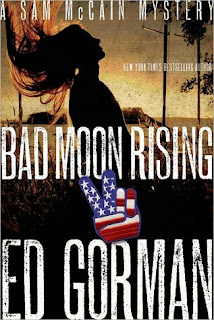 Ed Gorman’s small-town private eye/lawyer Sam McCain makes a welcome return in Bad Moon Rising, the 9th novel in the series. It’s another knockout mystery from Gorman, with the right balance of suspense, characterization, and humor.

For those new to the series, the San McCain saga begins in the late 1950s and is now up to 1968. The books are set in Black River Falls, Iowa, where McCain is a young lawyer and licensed P.I. whose liberal politics, nonconformist spirit, and tendency to represent outcasts, underdogs, and other less-favorable citizens, has marked him as persona non grata in the eyes of the community. But McCain has grown to the point that he doesn’t care much what people think of him. He sees through the phony social and political facades to see what is really happening beneath the surface: injustice, racism, sexism, domestic violence, hypocrisy, oppression, ignorance. But like Bartleby before him, McCain would prefer not to be a part of that society, and would rather read his Gold Medal paperbacks and listen to Buddy Holly. McCain would be bitter before his time if it weren’t for his deep compassion for the imperfect and morally corrupt world around him. He understands the limits of human strength, the depth of suffering, and the horrible things that people do to one another, whether deliberately, accidentally, or just stupidly. That mixture of sympathy, outrage, resignation, and humility is the touchtone of Gorman’s world, and watching those ideas grow in McCain over the past nine books has been one of the great pleasures of the series.

Bad Moon Rising finds McCain coming to the defense of a hippie commune on the outskirts of town. The law has just been waiting for an excuse to kick them out of Black River Falls, and it just might have found the perfect excuse to shut the party down permanently. The body of young Vanessa Mainwaring, daughter of a local and exceedingly wealthy war profiteer, was discovered in the commune’s barn. The fingers point to her ex-boyfriend, a mentally unstable Vietnam vet named Neil Cameron. McCain is ready to come to Cameron’s defense, until Cameron saps him over the head and takes it on the lam. Everyone in town says it is an open-and-shut case, but McCain refuses to give in to popular opinion. But as he gets deeper into the case, McCain doesn’t like the hidden sides of society that he uncovers, and he begins to doubt his own convictions.

One of my favorite parts about the McCain series is Gorman’s cultural insight. The McCain books are some of the best-written portrayals of the complexities of small-town America, like Winesburg, Ohio with a noir twist. This isn’t a nostalgic view of the good old days. Gorman’s 1950s and 1960s are as politically diverse and socially complex as today. Even though it is a small town, the crimes are anything but quaint. Gorman reveals the dark undercurrents, seething anger, and boiled-up oppression of mid-century Middle America. There might not be any fedoras or rain-slicked dark alleys, but Gorman’s world is 100% noir. His work embodies the compromised decisions characters have to make in order to survive in a compromised world. And because the McCain series is grounded so thoroughly in realism, McCain and the rest of Black River Falls have to live with the consequences of their actions. There’s a steady history of regret, pain, embarrassment, and resentment running through the McCain books. I don’t want to downplay how fun they are to read—because they’re compulsively entertaining and endearingly familiar to our own lives, families and communities—but there’s a darkness to the books that haunts one long after the story has ended.

If you haven’t checked out the Sam McCain series yet, Black River Falls is a great place to start, and will be released by Pegasus Books on October 12th both as a hardcover and ebook. If you’d rather start at the beginning—and by all means, the series has a terrific opener—then check out The Day the Music Died, which was recently brought back into print by Ramble House.
at October 01, 2011