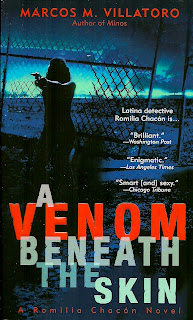 Last week, Marcos M. Villatoro dropped by my local mystery bookstore, Partners and Crime, for a reading in support of his upcoming Romilia Chacón novel, Blood Daughters. Unfortunately, a prior engagement held me up and I missed the first part of the event. Villatoro was still there, and I was lucky enough to meet him, if only briefly. The store was sold out of the first two books in the series, Home Killings and Minos, but they suggested that I start with book three: A Venom Beneath the Skin. I’m not usually one to start a series in the middle, but the novel looked promising, and the people at Partners and Crime have never steered me in the wrong direction. Once again, their recommendation didn’t disappoint.

A Venom Beneath the Skin is a riveting thriller, the type of book that will keep you up past your bedtime or make you miss your subway stop. There are procedural, action, and political elements to the novel, but Villatoro fuses them all together with a gripping story and strong, three-dimensional characters. Even though this was the third book in the series, it wasn’t difficult to jump right it. Romilia Chacón is an instantly likable character, someone who has the right balance of believability as a single mom and action hero. Romilia is both strong and credible, someone capable of extraordinary heroism but who is recognizably ordinary in her flaws. 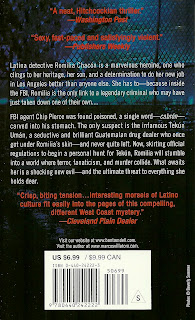 A Venom Beneath the Skin begins with the assassination of Chacón’s former partner and lover, Chip Pierce. The FBI is convinced that the killer is the notorious drug dealer Tekún Umán, and that the motivation was his jealousy and obsession over Chacón. She, however, is convinced that it has something to do with the case he had been working on: an unexplained explosion at a homeless flophouse that doubled as a drug depot in Los Angeles. Authorities suspect that the bomb was planted by terrorists, but no one has figured out why the target would be homeless drug addicts?

One of the strongest aspects to this novel is its multi-cultural worldview. A time capsule of current anxieties and politics, Villatoro navigates the complex and sensitive issues affecting America at the moment without becoming preachy or opportunistic. Instead, he works them seamlessly into the plot, which unfolds with the intensity and drive of a Hollywood blockbuster.

Romilia Chacón returns for a fourth novel, Blood Daughters, which is due out Oct 1 from Red Hen Press.
at September 10, 2011