Rex Stout on Words and Writing 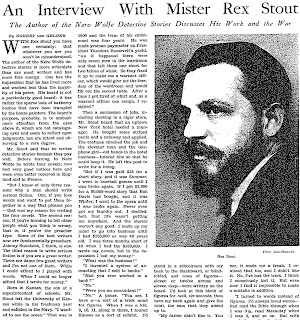 "I never worked more than three months a year. Thirty-nine or forty days on each novel, and I'd do two a year.

"No, there's nothing much to planning them. Of course, I was lucky on having hit on the name–Nero Wolfe. Simple but odd, people remember it. And Wolfe was born; he wasn't synthetic. I didn't have to sit down and decide: 'What color will his eyes be? Well they'll be blue. How much will he with? How will he walk? What expressions will he use?' He was born.

"I tried another detective later, Tecumseh Fox–because the Saturday Evening Post editors wanted a fresh detective–and he never was born. He was put together piece by piece and wasn't worth a damn.

"As for the story, you take a setting that interests you, think of what might happen in that setting, choose the most entertaining happenings, and then ask yourself" 'Well, why would a man want buy buy that champion bull? Why would some one murder a man because of a bull?' The answers come right along. You have your plot. You write it."

I was also struck by van Gelder's description of Stout's beard, with which he opens the article.

"His beard is not a particularly good beard: it has rather the sparse look of barberry bushes that have been trampled by the house painters. The beard's purpose, probably, is to ambush one's attention from the eyes above it, which are not cataloguing [sic] eyes and seem to reflect open judgments, but are intent and observing to a rare degree."

Email ThisBlogThis!Share to TwitterShare to FacebookShare to Pinterest
Labels: Beards, On Words and Writing, Rex Stout