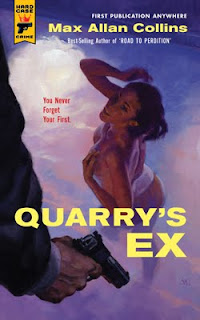 Quarry’s latest mission finds him in Boot Heel, Nevada, a low-budget version of Las Vegas. He’s on the heels of a Nick Varnos, a fellow hitman whose target is a B-movie director named Art Stockwell who is currently shooting Hard Wheels 2, a Billy Jack-esque biker movie. Selling his services to the director, Quarry poses as a publicist and hangs around the set, looking to stop Vargas, and to figure out who in the crew hired the killer in the first place. Things get more complicated when Quarry runs into someone from his past he never thought he’d see again: his ex-wife, Joni, who is not only appearing in Hard Wheels 2, but is married to Stockwell. Once before, she crossed Quarry, and now he wonders if she’s decided to cross her current husband, too.

Quarry’s Ex was my first step into the series, and it certainly won’t be my last. Between his smart-alecky sense of humor, wry cultural commentary, and sardonic quips, it’s hard not to be won over by his personality. These are two of my favorite lines: “Outside it had been as dry as unbuttered toast, but in here the air conditioning stopped just short of a meat locker” and “He was shaking, like a Hell’s Angel version of Barney Fife. Maybe a touch scarier.”

While he may be a bit of a smartass, there’s a humility—and humanity—to Quarry that makes him a well-rounded character and more than just a one-dimensional archetype. The moment that jumps to mind is when, after the day’s shoot ends, the hot young Production Assistant invites him out, and he has to turn her down to do his own investigating. He narrates, “She looked a little disappointed. It was one of those moments when I wished I was someone else.” The remorse in his tone feels sincere, but so, too, does the more physical longing in his next observation: “I took a few minutes to watch her go, because that well-shaped behind in a pair of jeans was enough to make me believe in God again. For a few seconds, anyway.” In those three sentences, Quarry reveals a few different sides to his personality: the loner who longs for companionship; the suave, macho playboy persona; and the witty, sarcastic observer.

As a film lover, the movie-shoot setting was an added treat. I was reminded of my favorite Richard S. Prather novel, The Cockeyed Corpse, which finds Shell Scott protecting bosomy babes shooting a nudie cutie in the desert. Collins’ book isn’t nearly as farcical as Prather’s—in fact, Collins’ book is a far more accurate portrayal of filmmaking than Prather’s—but they both share a similar fond satire of showbiz.

2011 has turned out to be one hell of a great year for Max Allan Collins and, in turn, for fans of his. This spring saw the release of Kiss Her Goodbye, one of Mickey Spillane’s incomplete Mike Hammer novels that Collins finished, and which turned out to be one of Hammer’s most enjoyable exploits yet. This summer, Collins also released Bye, Baby, Bye, a Nate Heller story set around the death of Marilyn Monroe. Next month, Hard Case is releasing another Collins/Spillane collaboration, The Consummata, and the Nate Heller short stories will be collected in Chicago Lighting. If that wasn’t enough, Collins’ also has another graphic novel, Return to Perdition, in November. The sustained high-quality of Collins’ recent work is impressive, and I’m looking forward to catching up with all the Quarry titles that I’ve missed out on.
at September 30, 2011