"The Guns of Retribution" by Icy Sedgwick (Pulp Press, 2011) 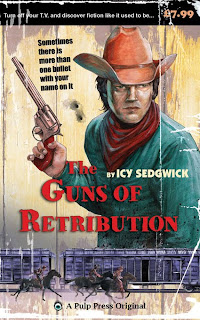 England’s Pulp Press takes a trip back in time and across the ocean for their latest release, Icy Sedgwick’s The Guns of Retribution. It’s a fast-moving, no-holds-barred, hardboiled Western novella.

The story concerns bounty hunter Gray O’Donnell, who left his hometown of Retribution, Arizona six years ago. He wanted to escape his past and build a better future for himself. The search for wanted outlaw Blackjack Bud Hudson, however, has brought Gray and his cohorts--Billy Cole and Mahko—back to his hometown.

Sedgwick opens the novel with an exhilarating action sequence as the bounty hunters jump onto a moving train in order to apprehend Blackjack. But when Gray and his crew get on board, they find more than they bargained for. Gray’s old nemesis, Jasper Roberts, is waiting for them, and he’s not alone. He’s not only got a posse with him, this time he’s also got a sheriff’s badge. Gray O’Donnell and Jasper Roberts have a long, tumultuous history between them. Gray knows about all of the skeletons in Jasper’s closets, and the sheriff will do anything to keep Gray’s mouth shut.

As the opening chapter illustrates, The Guns of Retribution is at its best when the excitement runs high. There’s a visceral, tangible element to Sedgwick’s writing that gives the story added punch. Here’s one of my favorite examples from the book:

I didn't even get the chance to ask what my momma had to do with anything before Jesse's fist connected with my jaw. The force knocked me backwards and I hit the dirt. Pain exploded in my back, and burned in my jaw. My arms splayed out so I couldn't reach m guns. Jesse leaned over me, and hawked a gob of tobacco-stained phlegm into my face. I lifted a hand to wipe it away, and he drove his boot into my exposed side. Knocked the wind right out of me. I doubled over, and fresh spikes of pain erupted in my back. Something cracked in my chest. I couldn't breathe in without feeling like someone was stabbing me.

But even when bullets aren’t flying, Sedgwick keeps the pace driving forward, all the way to a thrilling climax. Smartly, Sedgwick balances the physical violence with the darker elements of Western society: massacres of innocent Native American communities, hypocrisy, sexual abuse, and corrupt law officials. Touches such as these give an emotional weight to the action, and make the story more than just a fun romp through the desert.

I’m excited to see that Pulp Press has ventured into the Western genre for the second time (the first was Charles Jackson's Death of a Dude), and I hope that this will not be their last. I will also keep my fingers crossed that this will not be the last we see of Gray, Mahko, and Billy. Sedgwick has the makings of a strong core trio of a series on her hands, and I for one would like to see an on-going saga, in the same vein of what Edward Grainger (David Cranmer) is doing with Cash Laramie and Gideon Miles.

To learn more about Icy Sedgwick and her other books, visit her website or follow her blog.
at September 18, 2011