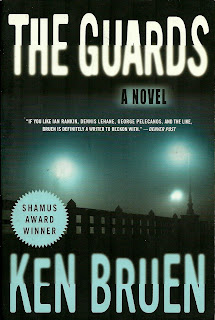 “Without mystery, we are lost!” says the deathbed-wino to Jack Taylor, an alcoholic Irish private eye whose most positive asset is also his biggest drawback: “You have a rare gift, my friend. …You never probe or pry into a person’s affairs.” The poetic irony is not lost on Taylor, who has spent the better part of his adult life in an inebriated stupor trying to avoid probing into even his own life.

Originally published in 2001, The Guards is the first entry in Ken Bruen’s Jack Taylor series. A former member of the Irish Guard who was kicked out for insubordination, Taylor now spends his time in the local pub, occasionally doing favors for people. Ann Henderson has heard of his reputation—both as a PI and as a drunk—and wants his help proving her daughter didn’t commit suicide, and that it was murder. Reluctantly, Taylor agrees to help.

One of the novel’s many brilliant touches is the surprising ebb and flow of the plot. Taylor is alternately too busy staying sober—or too busying blacking out while catching up on lost-benders—to do much detecting. There’s no sense of urgency to Taylor’s investigation, no race against time to save another soul, or to stop the killer from striking again. In Taylor’s sober moments, we come to learn of his past sins—the relationships he tanked, the pain he’s inflicted upon loved ones and hated ones alike—and why he so badly wants to blot out the past. As the story progresses, Taylor’s detection is directed more inward than outward, and it becomes clear that the real mystery Jack Taylor is solving is himself. 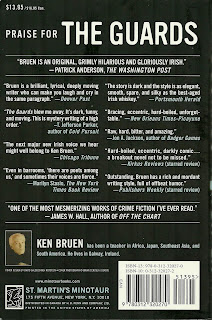 If you’ve never read Bruen before, this is the place to start. Bruen is one of the most articulate, expressive, and unmistakable stylists in modern fiction. His sentences are as rich as they are compact. At once a model of minimalism and a cascade of feeling, Bruen’s prose is as emotionally attuned as it is aesthetically pleasing. As one character says of Jack Taylor, “You are not a man who gives away a lot…a lot, that is, in the information department. What you do say has the qualities of brevity and clarity.” The same could be said of Bruen. His prose read like poetic verse; and he skillfully uses blank space as though he were painting, and not just writing, on the page. Bruen epitomizes that wonderful contradiction that is noir: his stories are as full of despair as they are full of life’s dark beauty.

Also, it is an exceptional, and all-too-rare, pleasure to read as unabashedly a literate writer as Ken Bruen. His characters swap authors names, and even poems, not as a sign of their schooling, but because literature actually means something to them. Books are a means by which they find clues to their own questions, reasons for their own complexes, and compassion for their own failures. Nor is The Guards without a sense of humor. Taylor’s wry, sarcastic commentary on everything from the state of modern Ireland to Phil Collins, pop music, and literary greats like Derek Raymond, is as crucial to his personality as is his deeply rooted guilt and self-destructive tendencies.

One of the biggest mysteries to The Guards is Jack Taylor’s ultimate motivation. He lives half his live in oblivion, and the other half trying to figure out why he wants to be that way and how to stay there longer. When Ann Henderson approaches him with the case, he confronts her with his own existential dilemma: “How come you want…a drunk…to help you?” Without missing a beat, she provides an answer, something Taylor has never been able to do for himself: “They say you’re good because you’ve nothing else in your life.” Throughout the novel, Taylor struggles to come to terms with how true her words are.

So, why does Jack Taylor take the case? It’s an important question to ask of any private detective, because often their worldview is expressed through their motivation for taking a job, and why else do we read about private detectives except to view life through such penetrating and experienced eyes—the world seen upside-down, inside-out, and right-side-up? In the case of Jack Taylor, it all goes back to those five words spoken by the wino: “Without mystery, we are lost!” The process of working forces Jack to confront his own inner demons. When you look at the whole novel in this light, Ken Bruen doesn’t seem to be using the mystery plot as a means for righting some wrong in the world, for achieving justice, or actualizing revenge. It’s not so much about the world around us so much as what is inside of us. The mystery tells us where and how to look, and what to look for; it provides direction for our own detection, wherever it might lead us, and prepares us for whatever it might reveal.
at September 26, 2011