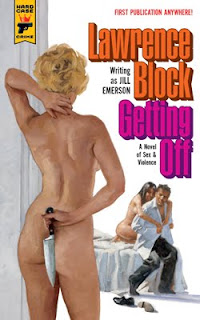 After a year-long hiatus, Hard Case Crime is back, and they’re making up for lost time with one of their most gloriously pulpy and enticing titles yet: Getting Off, by Lawrence Block writing as Jill Emerson. The additional writing credit is a nod to Block’s past, one of the pseudonyms he used for some of the more “steamy” books he wrote back in the 60s. Nearly four decades after Jill’s name last graced a book cover, Block has dusted off the pen name to give her another run. The result: a scandalously fun, thoroughly hardboiled, and genuinely sexy crime thriller. It’s like a sleazy Cornell Woolrich revenge fantasy. Noir has rarely been this titillating before.

The story is about a twenty-three year old girl from Hawley, Minnesota. She’s gone by many names—Kit, Carol, even Lucretia Eagle Feather—but her real name is Katherine Anne Tolliver. She’s young and beautiful, and men would die just to sleep with her. And that’s just fine with her…as long as she gets to do the killing. Her record is nearly perfect, except for those first five men she slept with. So, she makes a list, packs her bags, and sets out on a bloody trip down memory lane.

“Killing was fun, there was no getting around it, and killing men she’d slept with felt appropriate, and that was as much as she had to know.”

The front cover of Getting Off carries the tag line, “A Novel of Sex & Violence”—and it’s no joke. Some readers might not be too amused by the kinky antics to be found within the book. But, if your tastes do run in that direction, then get ready for a wild ride. I have never blushed this much reading a book in public ever before, and I relished every shameless second. Right from the first page, Block seems to be writing with a Cheshire cat’s grin on his face. He’s clearly having a blast. But as sordid as the story gets, Block never loses his sense of humor nor lets his guard down as a writer.

Despite the graphic content of some of the scenes, when you step back and let your cheeks revert to their natural color, you’ll notice how impeccably crafted the prose is, and how much restraint Block shows in his descriptions. There are points when things get pretty over the top...but they never get too over the top, if you get what I’m saying. There’s a fine line between using absurdity for literary effect and just being absurd. Partly it is a matter of taste, and partly it is a matter of intelligence. Longtime readers of the author know that Block has plenty of both, and this is what ultimately makes Getting Off such a satisfying read. Getting Off is not only erotic and suspenseful, but smartly written and cleverly plotted, too, with a fiendishly funny finale waiting for readers in the very last line.

And I can't finish the post without mentioning that great cover art by Gregory Manchess. Hard Case Crime has given readers some of the best cover art of the past few years, and Getting Off stands tall among the best of the best.
at September 29, 2011