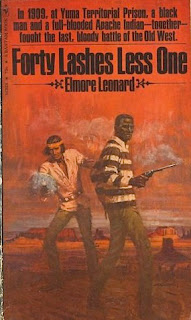 Elmore Leonard broke the mold when he wrote Forty Lashes Less One. He not only put the “wild” back into the “Wild West,” he made it crazier than ever before. Originally published in 1972, today the book still exudes a rare and precious chaotic energy and uninhibited creativity. When you get right down to it, the book is totally twisted—the humor is surreal, the violence palpable, and the characters are amoral at best. The story doesn’t proceed in any conventional direction, and it’s difficult to predict exactly where Leonard is taking you—and perhaps that’s because even the characters seem to be at a complete loss for control. Leonard leaves the typical Western paradigms in the dust, and instead creates something fresh, daring, and truly innovative.

As Forty Lashes Less One begins, Yuma penitentiary is getting a new superintendent, the ironically named Mr. Everett Manly. A minister by trade, he has no prior prison experience. Arriving at the same time is former soldier named Harold Jackson, Right away, the predominantly white inmates single him out because he’s black, but Harold remains defiant and holds his head high. Frank Shelby, the local kingpin among the inmates, decides to put Harold in his place and engineers a fight between him and another outcast, a Chiricahua Apache named Raymond San Carlos. 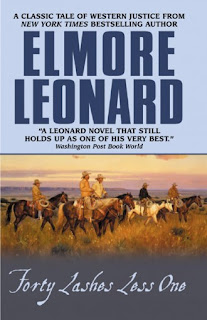 After spending time in the hole—“the snake den,” as they call it—Raymond and Harold become friends. Things begin to get strange when Mr. Manly decides to reform the two prisoners in an unconventional way: he wants them to become “warriors” like their ancestors. Raymond and Harold realize Mr. Manly is a little cuckoo, but who are they to argue for getting out of work duty? So, they run in the fields all day, and practice throwing spears. Then comes word that Yuma Penitentiary is shutting down. Everyone knows that Frank Shelby is going to try and make his escape. Meanwhile, Raymond and Harold start to plan their own escape, and how to exact revenge on Shelby and his goons.

That, in a nutshell, is Forty Lashes Less One. But it is a highly condensed nutshell that loses the ferocity of the characters, the spontaneity of the plot, and the unexpected humor and violence of the narrative. Everything unfolds so whimsically that the story feels alternately like a hardboiled prison narrative, a magical realist fantasy, and farcical nightmare. At points, Leonard seems to even be channeling the sardonic, anticlerical humor of Luis Buñuel, particularly in Mr. Manly’s attempts at educating Harold and Jackson about the Bible. Manly’s story about how all men are brothers turns into an unintended defense for incest. And Manly even admits to himself that one of the biggest motivations for him reforming these prisoners is so that, in the eyes of God, he might be redeemed for lusting after the female prisoners. Mr. Manly may be a minister, but his soul is as impure and corrupt as the murderers in his prison.

One of the reasons Forty Lashes Less One feels so unique is that, in many ways, it runs completely antithetical to the traditional Western. The West is supposed to offer endless horizons, heavenly vistas, and opportunities for renewal and purification. Forty Lashes Less One is the exact opposite: almost the entire book takes place within the penitentiary walls, and a significant portion even takes place in solitary confinement. All the characters are filthy, sweaty, and covered in blood or feces or sand. Even the brief glimpses of the landscape don’t inspire hope in the prisoners: “There was nothing out there but sky and rocks and desert growth that looked as if it would never die, but offered a man no hope of life.” The prisoners are confronted with a harsh landscape with little food or water, and few places to hide. An early escape attempt proves almost immediately futile. So much for Manifest Destiny—these characters couldn’t control their lives, let alone the world that surrounds them, no matter how hard they tried. 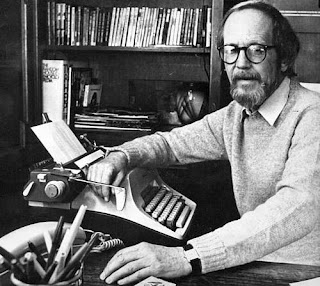 Another of Elmore Leonard’s masterful touches to Forty Lashes Less One is his choice of protagonists: Harold Jackson and Raymond San Carlos. The traditional Western is populated by cowboys, ranchers, lawyers, homesteaders, and other character-types who are typically white. Here, it is eye-opening and refreshing to see the West through the eyes of non-traditional characters. Not only is it a welcome reminder to how diverse the population of the West was, but also how divergent their experiences were. Brian Garfield’s Tripwire, published two years later, similarly focuses on a black protagonist, and uses his story as a lens for reconsidering what we typically consider the Western experience. Prejudice and racism were still present in the aftermath of the Civil War, and these narratives are useful critiques not only of American society in the past, but also the present. Ed Gorman’s masterful third book in his Guild saga, Blood Game, also examines racial conflicts in the West. More recently, Edward A. Grainger (David Cranmer) has been exploring similar themes in his Cash Laramie and Gideon Miles Western stories.

One of the great legacies of the Western genre is its social commentary. The building of homes, communities, industries, and legal systems are recurring themes in Western novels. While some books choose to idealize the past, others use the stories as an opportunity to deconstruct both historical and modern life, to take apart the pieces and examine them critically before piecing them back together. In Leonard’s book, Yuma Penitentiary becomes a microcosm for society as a whole. He critiques power structures, racial and gender attitudes, legal corruption, and even religion. When looked at in this light, Harold and Raymond’s rebellion becomes heroic not because they embody any righteous moral attitudes, but because of their defiant spirit. They’re non-conformists to the core. They recognize the bullshit and the corruption around them, and they don’t want to correct it so much as get the hell away from it all. There’s more than a bit of Huck Finn in them. In the end, however, they realize that a little revenge goes a long way, and they decide to revel in the pleasure of giving Frank Shelby and Mr. Manly their long-overdue comeuppance. Their final gesture in the novel is an inspiring moment of cultural dissent, a true declaration of independence. Harold and Raymond were freethinkers, counter-cultural idols whose resistance wasn’t at all out of place amidst the political upheaval of 1970s, Vietnam-era America. Elmore Leonard may have set Forty Lashes Less One in the first decade of the 20th century, but in a way he was still writing about contemporary times. Nearly four decades later, Harold and Raymond still have a lot to reveal about the topsy-turvy, politically screwed up world we live in. The Old West may be long gone, but it is still ever-present in the world in which we live.
at September 19, 2011