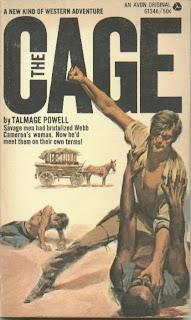 The Cage marks yet another crossover between Crime and Western writers. Talmage Powell, who got his start in the 1940s writing for pulp magazines like Detective Tales and Dime Detective, is best known for his Ed Rivers series of detective novels. He also wrote for Alfred Hitchcock Presents and contributed several stories to Hitchcock anthologies over the years. And while Powell did write for Western pulps like Ranch Romances, he only published one full-length Western novel, The Cage, which appeared as an Avon paperback original in 1969.

Powell’s West bears traces of predecessors like Harry Whittington and H.A. DeRosso (especially their dogged, devastated protagonists whose heroism is tainted by their natural impulse towards violence) and points the way for the surreal sadism that George G. Gilman would soon bring to the genre. Powell isn’t interested in pastoral traditions. The only purification to be found in The Cage comes through sweat and blood. This is a grimy novel, whose sun-scorched landscapes are as brutal and remorseless as the characters themselves. In the grand tradition of Noir Westerns that stretches from Clifton Adams to Ed Gorman to Edward A. Grainger, Powell is interested in the flipside of the Western fantasy, the dark underbelly and harsh conditions of frontier living.

Webb and Temple Cameron fled poverty-stricken, Reconstruction-era New Orleans for Tacton Flats, a barren land just north of Mexico. They lived there in peace, until one day Webb returned home to find his wife brutally raped and in a catatonic state. Finding the tracks of two horses and one mule, Webb decides to pursue the attackers and exact personal justice. Convinced that seeing her attackers defeated might shock her back into reality, Webb brings along his wife. To prevent her from committing suicide or running away, he converts his wagon into a cage for Temple. With neighbors Ethel and Clyde Tomberlin at their side, the Camerons head towards the border, hell bent on bloody vengeance.

Though the plot is fairly straightforward, it is still effective because Powell conveys both the physical and psychological torment of his characters—their hard living, and their harder punishments. Even though the rape isn’t described in detail, the aftereffect of being brutalized into a near-vegetative state is still shocking. There’s something about the lack of motivation behind the crime, and its extreme violence, that foreshadows the new breed of horror movies to come in the 1970s, such as Last House on the Left and The Texas Chain Saw Massacre.

Like with the shower scene in Psycho, The Cage is at its most shocking early on, and then settles into a more low-key—but still tense—groove. The conventional approach would be to save the big bang for the finale, but Powell chooses to do the opposite. Once the unsettling tenor has been set, Powell relies on the complexity of his characters to carry the story forward. None of them stand for on any obvious moral platforms, and their contradictions create the ethical dialogue that underscores the narrative. Clyde, for instance, once fled a Kansas lynch mob that accused him of raping a girl, but here is giving pursuit with a miniature mob of his own. Ethel is far more strong-willed than her husband, but now she begins to wonder why she forced him to chase down strangers with no evidence against them, just as he was once chased himself. And then there’s Webb, who is as bloodthirsty and merciless as his wife’s attackers.

An unexpected counterpoint to this drama is the character Micco. One of the last of the Seminoles who fled the Oklahoma reservation they were forced onto, Micco is waging a warpath with his group through Texas on their way to Mexico. He’s witnessed firsthand the atrocities that his tribe suffered at the hands of the whites. He’s known starvation, unprovoked violence, and oppression—and so he’s decided to fight fire with fire, and take an eye for an eye, just like Webb. When Webb and Micco eventually cross paths, Powell doesn’t pass any judgment on Micco, who serves as a reminder that the morality of revenge isn’t so cut-and-dried, and that some crimes can never be properly atoned.

Stylistically, Powell kept the momentum going by alternating not just between Webb, Clyde, and Ethel, but also between Micco, as well as the two attackers. It is a whole lot of plot and action crammed into 127 pages, and it makes for a terrific Western thriller. Powell also slips in a couple of great passages. This description of a battered prospector they find on the trail stands out as the best:

“He was a sloppily huge man, pig-gutted and flaccid, clothed in a filthy muslin shirt and homespun britches. He’d taken one hell of a beating. Blood and dust and sweat were caked on his huge, lacerated face. His left eye was almost closed and the color of a rotten egg. Blood had seeped over his temple and ear from a scalp gash in his bald, bullet-shaped head. A lump on his jaw gave his face a lopsided twist, and his lips were like ruptured grapes.”

My eyes popped out when I read, “ruptured grapes”! So much of Powell’s language is as hardened as the Western landscape, and as literal as the violence, that a poetic jab like that caught me off guard in the best possible way. It made the simile all the more effective. Another powerful use of poetic language was this description of Temple in one of her frenzied outbursts: “Her lips moved like pieces of wood breaking.” Comparing human lips to wood isn’t an obvious comparison at all, but its unnaturalness really captures the inhuman quality of Temple’s state. Dried skin, jerky movements, staccato spitting—it’s all right there, compressed into a few expertly chosen words. With similes that good, it is best to space them out, and Powell doesn’t take such poetic licenses for granted.

My favorite line in The Cage, and one of the most telling, is also one of the simplest. It is when Webb says to Temple, “I’m sorry, very sorry, for only one thing. I’m sorry for the necessity of it all.” In a sense, he’s apologizing for the manhunt he took her on, as well as his own outburst of violence. But in another way, he’s also apologizing for this sense of savagery that was inherent in the world at the time. It was present in the Civil War that separated them as newly weds, it was in the Reconstruction that devastated their home, and it was in the dead landscape at the ends of civilization where they eventually settled. They were desperate to get away from humanity—and the people they encountered along the way were just as desperate, too. If there’s any ounce of Noir sensibility in The Cage, it is located in this single line. Those dark places that you flee always follow, no matter where you go. You can feel remorse, and you can feel pity, but the darkness remains inevitable. Webb can say he’s sorry all he wants, but it is that word “necessity” that is the most unsettling word of all. It disturbs the sense of peace that was supposed to have been reached at the end of the journey, and leaves it opened ended as to what further acts of violence might still have to committed in the future.
at September 23, 2011