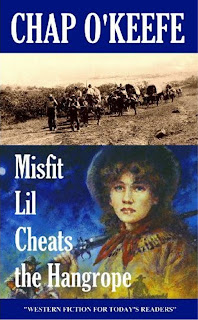 Anyone who ever said the Wild West was no place for a lady clearly never met Misfit Lil! Radiating with pluck and fortitude, she’s got a winning personality that can charm even the gruffest hardcases, the brains to outsmart the most cunning villains, and the perseverance to conquer any and all of the West’s many challenges. The series character has thus far appeared in seven books by author Chap O’Keefe, the most recent of which is Misfit Lil Cheats the Hangrope. Originally published in 2009 as a Black Horse Extra paperback, it is now available as an ebook. Readers looking for an innovative and instantly likeable main character and a rousing Western adventure will find much to enjoy in O’Keffe’s book.

Lil’s latest adventure begins as a wagon train crosses her father’s range. A snowstorm is imminent, and Misfit Lil decides to come to their rescue. Her good intentions, however, get in the way of the wagon train’s guide, Luke Reiner, whose ego prevents him from taking a young woman’s sage advice. After the storm blows over, the wagon train’s captain, Winston Petrie, decides that Reiner needs some help in this rough country. So, he hires Lil’s reluctant paramour, Jackson Farrady, to complete their journey. Trouble is never too far from the trail, and after a tragic murder, everyone’s suspicions turn to the newcomer Jackson. Lil, however, has her own suspicions as to who is behind everything, and it is up to her to save the day…if she can get back to the wagon train alive.

O’Keefe has built a lot of suspense, action, adventure into Misfit Lil Cheats the Hangrope, but some of the most enjoyable moments are actually the quieter ones. Quieter, meaning there’s no gunfire, but they’re plenty loud with laughter. Along the journey, Lil befriends two young girls, Honesty Petrie and Prudence Hannigan, a preacher’s daughter. Even though Lil was educated in the East, no book learning could erase her Western wiles, and her interactions with the more straight-laced Honesty and Prudence make for some very funny moments. The two wagon train daughters are charmed by Lil’s experience, and they form a fast bond. Whether they are taking a sip of whiskey or bathing in a stream, the interactions of the girls are very human and relatable. Such tender “coming of age” moments are integrated smoothly into the story, and add both heart and humor to the action-packed narrative.

Misfit Lil isn’t just a strong character, but a strongly written one, too. Chap O’Keefe hits the right balance of spirit and vulnerability, power and weakness, and humor and seriousness. As the book explains, “In Lil’s estimation a girl had a full share of responsibilities no less than a man, in this or any country.” In a genre that is rife with male heroes, it’s a pleasure to read about a female hero for a change. I look forward to going back to the beginning of the series and catching up with all of Lil’s adventures.
at August 07, 2011