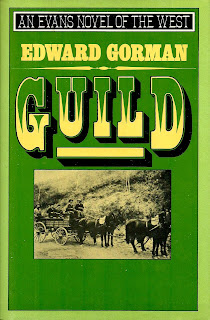 Book 1 of the Guild series.

Guild is one of Ed Gorman’s most haunting and enduring protagonists, a somber guide through the umbra and penumbra of the Old West. A former lawman haunted by memories of a little girl he killed while on duty, he’s become a bounty hunter with no clear allegiance to the law or the lawless. Guild appeared in four novels and one short story, and together they articulate Gorman’s anti-classical vision of the West, a profound and original take on the genre.

Gorman doesn’t celebrate celestial skies and wide-open plains, upstanding lawmen and quick-draw gunfighters, or any of the other iconic themes of the genre. Instead of a clear division between heaven and earth, Gorman sees a morally ambiguous purgatory populated by characters of equally uncertain morals. Nobody is entirely good or all bad; everybody’s guilty of something, and they always have their reasons. Whereas for many authors the land represented the possibility of redemption and renewal, for Gorman the land represents lingering ghosts and painful memories.

Guild, the first novel in the series, was first published by M. Evans and Company in 1987. It is now available as an eBook for Kindle. The story begins with Guild delivering a prisoner to the town of Danton. Before Guild can move on, trouble rears its ugly head when an accountant at the local bank is murdered during an attempted robbery. Frank Cord, the bank manager, is quick to point his finger at a traveling magician named Hammond. As the town turns into a lynch mob, Guild takes it upon himself to try and save Hammond, keep law and order, and figure out what Frank Cord is hiding from everyone. 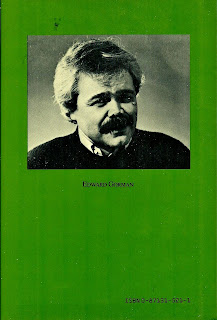 From start to finish, Guild is a terrific novel and exemplifies some of Gorman’s strongest traits as a writer: not only his lean plotting, deft display of action, and masterful command of language that wastes not a word, but also his intuitive feeling for character and emotion. One of Gorman’s hallmarks is his deep sympathy for humans at their weakest, most desperate moments. He understands all too well why people make bad decisions, and hurt others or themselves. When the Sheriff refuses to take a stand against Frank Cord, Gorman allows him this dignified justification: “It just means I’m old and afraid of getting turned out in the winter like some animal.” It doesn’t excuse his cowardice, but it explains it. Much of Gorman’s bitter poetry stems from all-too-human rationalizations such as these.

One of the aspects of Gorman’s writing that I greatly admire is how reluctant he is to presume to understand the extent of human suffering. A perfect example is Annie, a young woman that Hammond saved from a brothel and who travels with him as companion and assistant. Their relationship is neither as lover nor parent-child, but something deeper, more uncertain, and more sacred. Theirs is a bond based on love, support, and need. Something so natural it defies words, and which the townsfolk of Danton can’t comprehend. When Guild learns of her troubled past, Gorman doesn’t give needless, lurid explication. Instead, he offers a humble, subtle description of Guild’s reaction: “Guild made a face. He thought about her and her eyes and her grief.” Not only is there power in such understatement, but also dignity. Gorman gives Annie, and women who have suffered as she has, a respectful distance. By not going into excessive detail, Gorman conveys that real pain is sometimes beyond words.

Another quality of Guild that I like is his political commentary on the times. “There was a sense in the Territory that civilization was not only inevitable but good–yet most people still enjoyed the blood-quickening thrill that only violence brought.” Like Gorman’s later character, the political strategist Dev Conrad, Guild sees beyond party and class lines. His observations of a social gathering make his cynicism and skepticism very clear:

“Women in pink gowns and white gowns and blue gowns that cost as much as a working man’s wages floated around the three floors of the restaurant on the arms of men who talked in loud, important voices about finance and politics and local matters as if their opinions alone could change the course of things.”

“Finally, predictably, he got tired of looking at and listening to the walruslike men around him with their air of money and malice.”

In later Guild novels, Gorman would further explore the deep-seated moral, economic and political corruption of The West, but already in this first book his worldview is made clear. He has no tolerance for hypocrisy, elitism, or human exploitation.

In traditional Western lore, Manifest Destiny promised people freedom, opportunity, and a prosperous future. In reality, the land offered no such easy rewards. Gorman’s view of the harsh landscape reflects the hardships and torments that everyday people had to endure in order to survive: “This was the Territory, and all it asked for purchase was that you be able to tolerate cholera and influenza and ague and typhoid and scurvy, and that you be able to endure the fact that many of your young ones would die before they reached age five.” Gorman is a Realist, not a Romanticist, and Guild is a poetic lament rather than a patriotic celebration.

Guild is a man of principals, but he’s not morally righteous. He’s a man of rare humility and humanity. If he sees the worst in others, it is only because he has already seen it deep within himself. He uses his own troubled past—the killing of the young girl—as a measure for others. Guild is at once burdened and humbled by his own guilt. As he tells Annie, “I’m not sure I’m worth forgiving.” Whereas in a more Classical Western, characters could find redemption in the natural landscape, no such easy release from the past is possible in Gorman’s world. This is one of the novel’s most noir-inspired touches: the past stays with the characters, the bad deeds never go away, the ghosts never disappear.

One of the most heartfelt, and heartbreaking, moments of the book was between Annie and Guild. The two are full of anger and guilt, much of which stems from their own failure to make things right in the world, and the way the let down those they love. They fought with each other, but eventually they realized that all they have left is each other. “So you try not to hate me, mister, and I’ll try not to hate you,” Annie tells Guild. This is the only love that is possible in Gorman’s world. Imperfect and wounded, there’s nothing ideal about their bond, but it is sincere and honest. No relationship in any of Gorman’s novels is perfect—they’re all full of aching and loneliness, but they’re also completely believable, and all too relatable.

As a Western-Suspense novel, Guild is top-notch. The plot hooks you right away, the cast is well-rounded and compelling, and the novel builds momentum until its dark, sobering conclusion. Like in his noir novels, Gorman doesn’t soften the blows: life in the West has seldom been more bleak or blistering than in Gorman’s novels. Don’t expect a happy ending, but what you’ll get instead is a richer and more emotionally powerful experience.

Posted by Cullen Gallagher at 11:55 PM