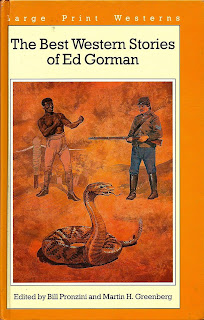 Part of the Guild series.

“Guild and the Indian Woman” is the only short story to feature Ed Gorman’s series character, the lawman-turned-bounty hunter Leo Guild. It originally appeared in the 1988 anthology Westeryear, and was later included in Bill Pronzini and Martin H. Greenberg’s The Best Western Stories of Ed Gorman.

The short story begins with Guild tracking down a man believed to have died of cholera. While he is checking with the doctor, a sixty-something year old Mesquakie Indian grandmother walks through the door and shoots the doctor in the face. She then asks Guild to accompany her to the sheriff. It seems like a cut-and-dried case, but Guild suspects there is more to it than meets the eye.

“Guild and the Indian Woman” is a terrific companion piece to the four novels that make up the saga. In just a handful of pages (26, in my large-print edition), Gorman gets to the heart of the Guild novels, which is to expose the dark recesses of the Old West. The crimes are as gritty and seamy as in Noir. 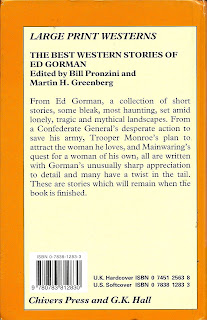 The story is also remarkable for how Gorman is able to condense the essence of Guild’s personality into a mere few lines. Guild can not only recognize a man’s potential for causing pain, but also the pains that a man has already suffered, and he’s never judgmental. Take a look at this paragraph below, as it clearly shows Guild’s world-weary insight:

“The door opened and a stubby man with watery eyes and filthy, shapeless clothes emerged. He needed a shave and a bath. With the coast-to-coast railroad tracks and another cycle of bank failures, the territory was home to many men like him. Drifting. Dead in certain spiritual respects. Just drifting. Guild knew he was cleaner and stronger and smarter, but he was probably not very different from this man. So he was careful not to allow himself even the smallest feeling of superiority.”

The Guild saga is one of my favorite Western series. If you like your Westerns unconventional and with shades of Noir, like something that Gold Medal might have published back in the 1950s, then be sure to look into the Guild novels, they might just what you’re looking for.