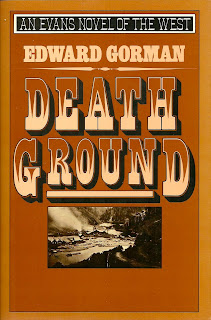 Book 2 of the Guild series.

Ed Gorman’s Guild series only gets better as it goes on. The books also get progressively darker, grittier, and more desolate, yet somehow more human and tender. Perhaps it is because the characters themselves become relatable, their misgivings more understandable, their stories more tragic. Death Ground, the second entry in the series, is even better than its predecessor, Guild. It was originally published in 1988 by M. Evans and Company, and is now available as an eBook for Kindle.

As Death Ground begins, the bounty hunter Guild has taken a job as a bodyguard for Merle Rig. But soon Guild learns that Rig has been murdered, and so has the young man, Kenny, whom Guild hired on to help protect Rig. The prime suspect is a notorious outlaw named Kriker, who is believed to have held up a bank with Merle Rig’s assistance. Two deputies, Thomas and James Bruckner, have been ordered to bring back Kriker. Guild, however, suspects the Bruckner brothers may know more about the robbery than they let on. As Guild sets out across the snowy plains, he unwittingly wanders into a grim drama of human devastation with no chance of a happy ending.

Like its predecessor, Death Ground is hard-hitting Western Noir. The characters aren’t driven by heroism so much as desperation, depression, and selfishness. They exist in a world where “good” and “evil” don’t exist, but where every action is cast in a morally complex shade of grey. Kriker, for instance, is a mess of bad deeds and good intentions. A thief and a killer, he started his own settlement where people wanted by the law could hide out and start their lives over again, but this time on the right foot. Kriker also saved a little girl whose parents were killed in one of his raids. But now both the girl and the town are in jeopardy. She has cholera, and the whole town could die if she doesn’t receive treatment. Kriker doesn’t believe in doctors, however, yet he won’t leave without her, either. This is a perfect example of the psychologically nuanced characters that Gorman excels at creating. Kriker is a living and breathing contradiction, but his complications make him believable. He’s as much a villain as he is a victim—and a hero, for that matter. He goes to great lengths to save that little girl, endangering himself and the whole town in the process. But, in Gorman’s world, redemption is never so easy to come by, as both Kriker and Guild learn the hard way. 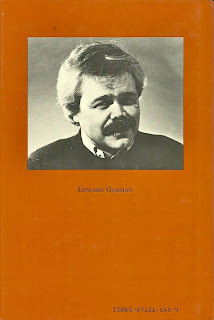 “You live in a nice world, Mr. Guild,” says the sheriff. “It’s the only one that’ll have me,” replies Guild. Guild is an imperfect man living an in imperfect world. He’s as much capable of violence and immoral actions as those around him. And he carries as much as the rest of them, if not more. That’s why he’s the perfect Western narrator—because he understands all too well the people with whom he crosses paths: the not-so-good and the not-entirely-bad, the awful things they do to one another, and their hopes and dreams deferred. Guild, never one to waste words, says it more simply: “People were just people and sometimes they did terrible things. Everybody did.”

One of my favorite quotes from a movie comes from Jean Renoir’s The Rules of the Game: “The awful thing about life is this: Everyone has his reasons.” I’m not sure if Gorman was alluding to that line when he wrote, “We all got our ways, Mr. Guild,” but I think both he and Renoir share the same sentiment. Renoir and Gorman are humanists. They don’t seek to judge their characters, but to make sense of their actions. The more imperfect the characters are, the more sympathy these artists express towards them. Renoir and Gorman are understand, but not always forgiving. Even the Bruckner brothers are given their moments of empathy. James, the younger one, had his face scarred by his older brother, Thomas. Loveless and friendless, James clings to Thomas, following him on a dark path that leads to violence and murder. Thomas isn’t entirely the bad guy, however. He had ambitions, wanted to leave the family farm, wanted to make something of himself, and he feels bad for the way he treated his brother—that is, as much as he can feel about anything. Therein lies his problem: he doesn’t feel enough. That’s why he can do the things he does.

Guild, on the other hand, feels too much. At least, he used to. In Death Ground, the world is wearing down on the bounty hunter. Law and lawless alike can’t understand how can he do his job: track a man, and sell him to justice for money. At times, even Guild himself is struck by the inhumanity of his job. But in an inhumane world, sometimes that is the only way to survive. That is why he holds a bit of respect for men like Kriker, men who risk everything for the life of another human. Love is never idealized in Gorman’s world—love exists only in an outlaw who clings to a mute child whose parents he killed, and who he allows to suffer from cholera because he doesn’t believe in doctors; love exists between brothers who stick together, even though all they can do is cause harm to themselves and others; but love doesn’t exist for Guild. It did once, and the memories of a wife who left him linger as painfully as thoughts of the little girl he once killed while working as a lawman. Love, however, was not through causing Guild pain, and would reappear in both Blood Game and Dark Trail (my other favorite novel in the series).

If any character is redeemed through this tragedy, it is Father Healy. A former criminal, he hid out in Kriker’s settlement and posed as a priest. The tragic events depicted in Death Ground, however, give Healy the chance to finally give much needed comfort and reassurance to the community. As the cholera spreads and families are destroyed, the devastation takes begins its toll on Healy, and we really see what it means to have spirit, and the strength it takes to bear witness to such tragedies—not just the ones that are beyond our control, but the ones that we create, too. As the night draws to an end, it becomes increasingly impressive to see how Healy retains the moral resilience to stand by the community in its darkest hour.

In Death Ground, Gorman also continues a theme that he began in Guild: the anti-classical view of the West. Instead of celebrating heroism, freedom, and pastoral landscapes, Gorman focuses on corruption, guilt, and doleful environments. Gorman looks beyond the conventional, patriotic themes and sees the darker underbelly of the West. Here is one such example:

The theme of “control” Gorman would further develop in the next entry in the Guild saga, Blood Game.

Gorman’s West is constructed from “bitter bits of real civilization.” There’s nothing majestic about it, nothing grand or celebratory, nothing ideal. His characters cling to whatever they can hold on to: abusive relationships, unethical jobs, paths that can lead nowhere but further down. They aren’t grounded so much as they’re stuck in the ground—six feet under, or at least part of the way there, anyway.

There’s a lot of hard-lived poetry in Gorman’s novels, and none of it harder to swallow or grittier than in his Westerns. Death Ground stands as one of the bleakest entries in the Guild series, but also one of the best.