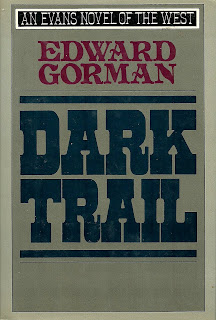 Book 4 of the Guild series.

Dark Trail is the grave conclusion to Ed Gorman’s Guild saga. Gorman not only saved the best for last, he also saved the darkest, most dolorous, too. Originally published by M. Evans and Company in 1990, it was later reprinted in a paperback edition by Forge in 1997.

In Dark Trail, the past finally catches up with lawman-turned-bounty hunter Leo Guild. Years ago, his wife, Sarah, left him for a gunfighter named Frank Cord. Now, she wants Guild’s help to save Frank’s life. Frank has gone and left Sarah for another woman—another gunfighter’s woman, Beth. Unlike Guild, however, this gunfighter—Ben Rittenauer—isn’t going to let his girl go so easily.

As tensions mount between Frank and Ben, a third party begins to show interest in the fight. Tom Adair, a local cattle baron and railroad tycoon, wants to throw a party for the local aristocrats and politicians. The main attraction: a real, live gunfight. The prize: $10,000. Knowing that whomever wins gets both the money and Beth, Frank and Ben quickly agree to a public duel. As the big night draws nearer, Guild struggles to convince the men to call off the fight before it is too late.

With its circular narrative and inevitable, disastrous conclusion, in Dark Trail Gorman elevates the Western to the level of Greek Tragedy. The violently sobering finale shows how little value these people had for human life, whether it was their own or another’s. In previous Guild books, Gorman has remarked about man’s inhumanity to man—“People were just people and sometimes they did terrible things. Everybody did.” (Death Ground) and “Sometimes we treat people we love pretty badly.” (Blood Game)—but nowhere is his lament for humanity lost greater or more affect than here, in Dark Trail. 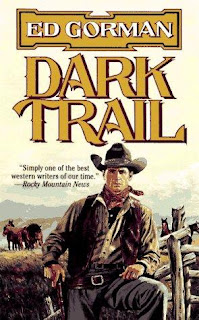 One of Guild’s struggles in each of the books has been to preserve the sanctity of human life—an ironic goal, considering his job as a bounty hunter. His job, however, positions him to see just how debased and devalued life was in the Old West. People would kill, prostitute their bodies, or sell their souls for a dollar—or less, if they were desperate enough. And there would always be somebody (like Tom Adair in Dark Trail, or John T. Stottard in Blood Game) ready to take advantage of those hopeless people. Try as he might, Guild couldn’t beat the Adairs and the Stottards of the world, and he couldn’t convince the Sarahs, Beths, Franks, or Bens that living and loving was worth more than the price of a new gown or a lead bullet. Guild learned the hard way—by taking an innocent life by accident—and it has been his burden to see history repeat itself over and over again, and to be unable to stop the cycle from continuing. That is what makes Guild a tragic character—he’s as guilty as the rest, but this knowledge doesn’t allow him to enact any change in the world around him, so he just relives the same pains over and over again.

Relationships in Gorman’s novels are never romanticized or idealized—they’re as flawed and wounded as the people are themselves. For that reason, they’re very realistic and relatable. His characters have enough self-knowledge not to believe in happy endings, which allows for very frank and honest discussions about love (or love lost, as is often the case). This dialogue between Guild and Sarah is a classic example:

Guild: “There was a lot of years when I thought that would still be a good idea.”

Sarah: “Us getting back together?”

Guild: “I know. But it’s nice to think about sometimes.”


Another hallmark of Gorman’s novels are his morally ambiguous characters. There are no easy heroes and no easy villains—in fact, those “hero” and “villains” labels rarely apply to his stories. Everyone is equally capable of hurting someone else, just as everyone is equally capable of helping someone else (even if they rarely do). Just as much a hallmark is Gorman’s refusal to pass judgment. When Guild tells Sarah, “You really are good. True and honest and loyal,” there’s no irony or resentment in his voice. In a way, Sarah is the person responsible for this whole chain of events—it was her who left Guild for Frank in the first place—yet, in Guild’s eyes, she is still the person most capable of goodness. Guild is sincere because he, like Gorman, doesn’t blame Sarah. Guild knows that perhaps it was himself who drove Sarah away, and that maybe it was his own failings as a husband—and as a fellow human—that started this tragic ball rolling so many years ago. Guild has a rare sense of humility, of perception, and of understanding. He understands people because he understands himself—all the bad things he’s done, and all the good things he could have done but failed to.

Reading all the Guild stories right in a row—Guild, Death Ground, Blood Game, and Dark Trail, plus the short story “Guild and the Indian Woman”—was a moving experience. They’re a mournful, brooding bunch, but they’re all excellently written, and filled with compelling, lifelike characters. Guild is a remarkable protagonist, and it was a pleasure spending time with him. And even though the series is over, I’m sure that I will be visiting Guild again real soon.

Posted by Cullen Gallagher at 10:00 AM