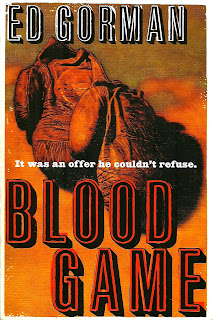 Book 3 of the Guild series.

Blood Game is as brutal and bloody as Westerns come. In this third entry in the Guild saga, Ed Gorman gives a gut punch to the whole “man’s inhumanity to man” theme and leaves it bruised and broken, curled up in a fetal position in the corner. It’s a beautiful book, but beauty doesn’t have to be pretty, and it rarely is in Gorman’s novels.

Originally published by M. Evans and Company in 1989 and reprinted by Forge in 2001, Blood Game finds lawman-turned-bounty hunter Leo Guild working for boxing promoter John T. Stottard. Stottard wants Guild to guard the cash box during an upcoming match that involves his star fighter, Victor Sovich. Guild doesn’t like boxing because he finds it savage; but he finds human exploitation even more barbarous, and Stottard and Sovich are two of the worst offenders. Sovich is notorious for fighting black boxers in the ring, several of whom have already been killed by his savage blows. And that’s just what Stottard and the crowds are hoping will happen which Sovich faces off against Rooney, an aging black fighter whose better years are already behind him.

Tensions mount as Guild realizes that more than just money is riding on this match. There’s Stottard’s son, Stephen, who is emotionally attached to his abusive father, and haunted by the absence of his mother who ran away when he was still a child. Then there’s Clarise Watson, the sister of a man whom Rooney killed in the ring. And then there’s John T. Stottard, himself, whom Guild suspects might be up to foul play. As the countdown to the fight draws nearer, Guild witnesses just how low human nature will sink for a taste of blood. 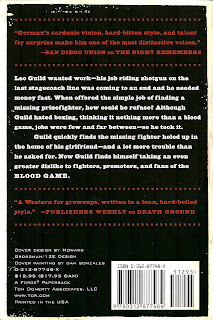 The final boxing match is one of the most despicable presentations of society in all of Gorman’s works. The blood and the violence are matched only by the vileness and desperation of the characters. Like a cataclysmic domino effect, everyone’s plans collapse into disastrous ruin, leaving Guild to try and pick up the pieces. As one doctor tells Guild, “Sometimes we treat people we love pretty badly.” That line could be the epigram for many of Gorman’s novels. It’s simple, but it captures the tragedy of so many of the author’s books, including Blood Game. Neither John T. Stottard, his wife, their son, or even Clarise Watson could comprehend the shockwaves their actions would cause. The effects would linger long after the boxing match ended, and some pains don’t lessen with time, they only grow deeper.

Gorman’s characters frequently take a lot of physical blows. The punishment they endure is on par with some of Dudley Dean’s work that I’ve read. But in Gorman’s work, the characters that receive the most punishment aren’t the ones who get punched or shot—they’re the ones who survive, and live to remember all the pain they’ve caused in others. As Guild tells someone at the end of the book, “Hitting you would be easy. You’re going to have to live the rest of your life with how you treated him. That’s going to be the hard part.” Guild is also a survivor, one burdened with memories, and that’s where his soulfulness comes from.

One of the most prominent themes of Blood Game is control—not only over one’s own life, but also over others. John T. Stottard tries to achieve control through manipulation: he abuses son into submission; he rips off his fighters; and he stokes through crowds through bloodlust. Guild is a man who can’t be bought, which is why Stottard immediately dislikes the bounty hunter. It’s also why he trusts Guild, and looks for new ways to deceive him. The other side of the “control” theme is that of human exploitation. Blood Game explores the deep roots of racism in American society, and how even after slavery was technically over, black people were still exploited, abused, and treated as an inferior class just because of their skin color. By exploring these issues, Gorman reveals the far side of paradise. While many tend to think of the West as a mythological utopia, Gorman reminds how hypocritical, barbaric, and ugly civilization out West really was.

Gorman’s prose style is deceptively simple. His streamlined phrases are powerful without being bombastic, full of emotion without resorting to theatrics. There’s never a wasted word or an excessive adjective. The narrative flows smoothly from first page to last, and reading his books from cover to cover is not only a pleasure for the experience, but it also reinforces just how tightly constructed the book is. The book is also full of strong, poetic imagery, such as when he describes a gunshot in the back of someone’s head as “a terrible purple flower suddenly in bloom.”

Reading the Guild saga, I’ve been struck by how crucial the theme of prolonged guilt runs through all the novels. (I don’t think it’s a coincidence that only one letter differentiates “Guild” and “guilt,” either.) Much like in Clifton Adams’ The Desperado and A Noose for the Desperado, Gorman’s characters can never outrun their history. As one character admits, “I knew that at last my past had found me, the past I wonder about when I can’t sleep at night.” Guild, himself, is no exception. He understands people so well because he’s seen the worst of himself in action, and he’s never forgotten what bad things he is capable of doing with his own two hands. Another character says these words, but they summarize Guild’s own conscience: “I know that no apology can undo what I did. I must accept my blame without any attempt at justifying myself.”

For me, the most moving line was one character’s admission: “I wish I could feel good, Leo. I wish I could feel some satisfaction. I deserve what happens to me, Leo. I shouldn’t have done it. I surely shouldn’t have.” None of the characters had in mind some large scheme, or any grandiose plot. They wanted something they thought was simple—money, sex, love, revenge, happiness—but never realized the heavy cost they would have to pay to achieve it. “I don’t want to hate her anymore, Leo,” one character tells Guild. “I’m tired of hating her. It takes too much out of me after all these years.”