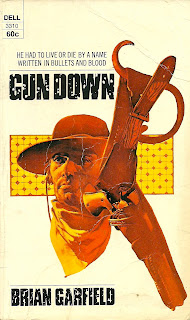 Gun Down isn’t a fond farewell to the bygone days of the Wild West – it’s a violent, bloody eulogy belted out by two hardcases who don’t have a place in the modern world and who refuse to go out quietly. The time is 1913, and the place is Gila Bend, a town in southern Arizona. Law and order have tamed the frontier, and modernity has given people not just trains, but also automobiles, telephones, movies, and there’s even talk about airplanes. But two men are about to give the locals a taste of the old days that they won’t soon forget.

As the book begins, Zach Provo, a half-Navajo outlaw who has spent most of his life behind bars, leads a daring escape from Yuma Penitentiary. After killing the guards and taking their guns, he takes a crew of eight other inmates across the state to Gila Bend to exact retribution on the man who arrested him decades ago. That man is Sam Burgade, a legendary lawman and railroad detective whom time has passed by. Now that he is white haired and retired, Gila Bend sees little use for the likes of Burgade. But when Provo and his gang rob the town and kidnap Burgade’s daughter, it is Burgade who straps on his old gunbelt and leads the posse across the desert in pursuit of the outlaws.

Brian Garfield’s prose is as tight as a fist, and the story as forceful and raw as a punch from a desperate man. Gun Down is a tough Western, dark and unsentimental as only Garfield could write. It’s a work of subtle but masterful craftsmanship. 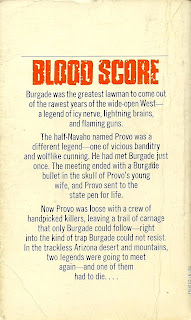 In Garfield’s “Ten Rules for Suspense Fiction,” the first rule is “Start with action; explain it later.” Gun Down is a perfect example of this. The first sentence of the book shows Provo smashing a prison guard’s head with a rock. As Provo and the rest of the chain gang make their escape, you learn about the time, the place, the characters, and their plan. Why waste time with exposition when you can hook readers with action and make them immediately invested in what is happening now, as well as what is going to happen next? That’s a hell of a lot more effective than wasting a few pages on setting and atmosphere.

Garfield’s characters are never your run-of-the-mill genre types. Burgade is distinct from a lot of other Western sheriffs. He's not a superhero or a one-man army, and his fatigue that comes from years of fighting is palpable. He knows that he’s from a different era and all he wants is to show the world that he’s not useless. At first, it isn’t outrage or injustice that makes him want to hunt Provo, it is opportunity.

“Burgade didn’t hate Zach Provo; he didn’t really care one way or the other about Provo. It was only that Provo gave him something else to think about besides lonely old age.

“I hope they don’t get him before I get a crack at him.”

That last line, which Garfield himself put in italics, is the first sign of Burgade’s darker side, of his relentless drive and capacity for unmerciful violence. “Inside Burgade, a hard knot grew, a pain of ugly lust that demanded violence—deeper, stronger than the will to live.” It’s not that he’s a bad guy, but that what made him so good at his job as a lawman was the capacity to think—and act—like the men he was hunting down. “Burgade knew the rage that burned in Provo. It was no more savage than his own.” In this way, Sam Burgade is a cousin to Garfield’s Death Wish and Death Sentence protagonist Paul Benjamin, who draws crime to him by preempting the criminals’ thoughts and actions.

Burgade’s pursuit leads the posse across territorial boundaries, and one by one the lawmen have to head back home. The final showdown is on a Navajo Reservation, a significant choice for a couple of reasons. One is that Burgade has no legal jurisdiction there, and he is more of an outlaw on those lands than Provo. This allows the two rivals to face off against each other on equal terms. It also brings the conflict beyond the bounds of law and order, and reveals the bare emotions that are driving the characters. Provo and Burgade’s impassioned vengeance is beyond reason, and beyond repair. Provo will never get his lost decades back, nor can Burgade undo the vicious rape that his daughter suffered. Burgade had nothing to gain by setting a trap for Provo (before his daughter was kidnapped, that is) and Provo had nothing to gain by raiding the town. Perversely, their self-destructive impulses only drive them harder.

Burgade and Provo may be smart, but they're not above reproach--or failure. They each spend a lot of time instructing their respective followers what the strategy is, or how to outwit their opponents, but things don't always go according to plan. Garfield keeps the plot dynamic by allowing his protagonists to make mistakes or to have their plans derailed by arrogance or accident. Burgade and Provo spend so much time second guessing one another that their larger goals become obscured by this contest of mental strategy and one-upmanship. They jeopardize the things they hold dear: Burgade his daughter, and Provo his freedom. Their respective failures amplifies the sense of risk, and it makes their determination to succeed--at any cost--all the more real. 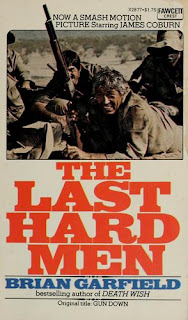 Garfield also divests the Western of traditional honor and heroism. As the hunt continues, Burgade begins to have serious doubts about himself, his capabilities, and his mission. He calls it “a cheap poetic fantasy” and “an old man’s pathetic dream.” When he first heard about Provo’s breakout, he foolhardily set a trap for the outlaw that practically invited his daughter’s capture; and later he stubbornly refused to wait for help from the proper authorities. His recklessness is reprehensible, but it is also completely relatable. He’s driven by emotion, not pragmatism. There is reason behind his actions, but it is the rationale of a desperate man, tired from life, and sick from what he has seen and done.

“He was old, he was dead tired, and it took him four or five minutes standing there in the silence to figure out what thirty years ago he’d have done instinctively. It left him profoundly depressed, more so than before, because now for the first time he felt the crawl of uncertainty in him as his self-confidence, which was the one thing that had kept him going, began to drain. He had pumped himself full of arrogance: now all of a sudden he was allowing himself to realize how poor his chances really were—of getting near Provo at all, of getting Susan away, of even staying alive through the next six hours.”

Gun Down is full of hard-lived poetry, and Garfield doesn’t flinch at the violent things that people do to each other and to themselves.

But amidst this harsh, action-packed story, there is some really beautiful writing. Take this passage, for example:

“Burgade’s posse left Winslow at a canter, steel-shod hoofs drumming in the starlight, along the right bank of the Little Colorado River toward the Navajo desert. It was just ten or twelve miles west of here that Provo had robbed the Santa Fe train twenty-eight years ago.” 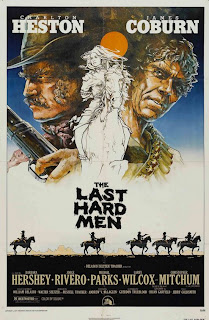 The cadence and phrasing of the first sentence is so subtle, so well-timed and vividly described. What follows is a stark contrast in tone and meaning: the poetic imagery of the first sentence is juxtaposed with the matter-of-fact tone of the second. Garfield shows such restraint as he reveals to us the inciting incident for the whole story: the very location where Provo robbed a train and blew up several innocent civilians decades before. The fusion of the two sentences also captures one of the marvelous capacities of the West: the inexorable union of poetry and history, of lyricism and violence.

Originally published by Dell in 1971, Gun Down was turned into a movie in 1976 called The Last Hard Men. It was directed by Andrew McLaglen, a one-time assistant to John Ford, and the movie starred Charlton Heston as Burgade and James Coburn as Provo. I haven’t watched the movie yet, but when I do I will report back on it.

Three more of Garfield’s Westerns came in the mail since I started reading Gun Down. I know what I’ll be reading the rest of this weekend.

Gun Down is another tour-de-force Western from one of its best writers, Brian Garfield. Highly recommended if you haven’t already had the pleasure of reading it.
at June 04, 2011