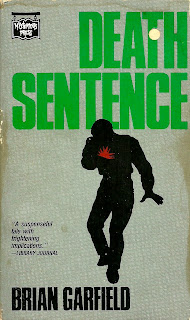 In 1972, Brian Garfield introduced the world to CPA-turned-vigilante Paul Benjamin in Death Wish. His wife and daughter were raped and attacked by muggers, and both died from the physical and psychological wounds they suffered. When the police weren’t able to apprehend the assailants, Benjamin began his one-man crusade to clean up the streets of NYC.

Three years later, in 1975, Garfield unveiled a sequel. Death Sentence is a desolate but distinguished suspense novel that follows Paul as he leaves New York and continues his war against crime on the streets of Chicago. Set in the weeks around Christmas and New Years, Paul is trying to settle into a new life and a new job, but he can’t let go of the past just yet. Purchasing two new guns and creating an alternate identity, he prowls the streets by night, wracking up an impressive body count and creating a media buzz almost immediately. Three unforeseen developments, however, cause Paul to reconsider his actions. First, he begins to fall in love with prosecuting attorney Irene Evans while still carrying feelings for his deceased wife. Second, a number of innocent civilians are killed while defending themselves imitating Paul. And third, he might not be the only vigilante in Chicago anymore.

Death Sentence takes a long hard look at some of the most unpleasant areas of the human condition: our capacity for violence and redemption as both individuals and as a society. It’s dark stuff, for sure, but also emotionally compelling and intellectually arresting. As Paul tries to fit in and make friends, he finds himself caught in numerous conversations about the unidentified vigilante. Not wanting to get so involved as to implicate himself, he stays on the sidelines, listening to others debate in favor of and against vigilantism. While this allows him to reflect somewhat objectively on his actions, it also gives Garfield the opportunity to indulge in the meat of his novel: a discourse on contemporary America that is equal parts political, philosophical, and personal. With quotes from Alexis de Tocqueville and Edmund Burke, the conversations are well thought out, and none offer easy answers.

Newgate Callender (aka Harold C. Schoenberg) criticized the book in the New York Times when it was released. "There is a lot of didactic padding and an effort to find something that would make Death Sentence something more than a dull rewrite of its progenitor." It is only a one paragraph review, and within that paragraph only one sentence actually deals with his opinion of the novel. I don't think Callendar got the novel right at all, and he doesn't give it the time that the work deserves. Some of the individual characters in the novel might seem "didactic," but they are just individual parts of a longer conversation that is going on. Garfield doesn't place any obvious mouthpieces in the novel, nor does he set up any easy straw men. He writes each of the different perspectives with conviction and thoroughness, and he respects the complexity and controversial nature of the issues he has undertaken. Garfield's relationship to Paul Benjamin is complicated: he emotionally sympathizes with Paul's violent instinct yet, at the same time, intellectually abhors it. Attempting to work out that contradiction is what makes the story so fascinating to read. Garfield is a smart writer, one who knows how to balance action and suspense with deeper issues. He's economical with words, but understands the power that poetry can bring to language. As Paul Benjamin's crime wave continues, he becomes increasingly apprehensive and uncertain about what he is doing. In this way, Paul begins to resemble the sort of Western protagonist that Harry Whittington might have written, someone with a compulsion towards violence that, through the course of the story, comes to realize how repugnant their ways really are. Death Sentence also resembles Westerns in a deeper sense, as well. Westerns often have to deal with the tensions as a society founded on violence tries to “civilize” itself and implement law, order, and domesticity. Westerns are also as much about the building of civilization as the sustaining of it. Death Sentence isn't so much about building as it is about whether to sustain or destroy, and whether it is possible to rebuild anything out of the rubble. Paul Benjamin asks himself this when looking at the emotional wreck of his family life, and he forces New York and Chicago to ask this of of their own cities and populace.

The movement from the Law of the Gun to the Law of the Book was explored in countless Westerns, and Death Sentence poses the question of, What happens when the Book fails society and we’re forced to go back to the Gun? Irene states this theme most clearly when she tells Paul, “I’ve started asking myself whether there’s any possibility of a society surviving without the things we think of as the old traditional civilized values. Personal dignity, respect for the law.” These were some of the same things being fought for in Shane and The Man Who Shot Liberty Valance—and in both cases, the answer lay in the removal of both the honorable gunfighter as well as the ignoble outlaw. There are a lot of bitter truths in Death Sentence, but none is more difficult for Paul Benjamin to swallow than the realization that, in his attempt to make the world right, he made it more wrong than ever before.

Here is an excerpt from one of the conversations that Paul overhears. It elucidates the connections that Garfield is making between modern America and The West:

“The vigilante sees himself as some kind of reincarnation of the traditional American hero….He’s got an image of himself as a messianic reformer, trying to resurrect the kind of heroism that forged our national identity in the Wild West. The frontiersmen who killed and got killed until the wilderness was mastered. But it was a false image then and it’s false now. It wasn’t the gunslingers who tamed the country. It was the settlers. In the same way, it can’t be the vigilantes who’ll solve anything today. They only add fuel to the flames.”

Garfield is great at delivering atypical protagonists, and Paul Benjamin is one of darkest and most complex. Even though he takes the traditional post of the lone-hero-with-a-gun, he’s anything but a hero, nor is he an anti-hero (nor is he anything like Charles Bronson's portrayal in the movie of Death Wish). Paul isn't not a villain either. Instead, he’s a morally ambiguous figure whose emotional drive is as recognizable as it is repellent. We sympathize with his impulse for revenge, and we can admire his drive to actually do something, but the coldness of his killings is frightening. They’re not heroic, and Garfield knows this. Garfield describes the killings in a disquietingly removed way. Much of the violence actually doesn’t occur on the page, and we have to read about it in newspaper reports that Paul himself anxious reads the morning after his hunts. It’s as if the act of killing is such an out-of-body experience that Paul isn’t even there, that it isn’t even part of his human capacity anymore.

Paul is strong, but he is weak. He has the nerve to walk into the worst areas of the city and lure danger to follow him, but he’s scared every step of the way—scared not only of what he might do, but of the knowledge that he has the capacity to be every bit as devious and criminal as those he is hunting. Paul catches his prey by acting like them, thinking like them, and ultimately acting like them. Paul is as obsessively hateful as John Wayne in The Searchers. Garfield doesn’t hide the unpleasant aspects to Paul’s character, and that’s what makes him so believable, but also so reprehensible. By the end of the book, Paul has never been further from a hero his whole life, and if has been unable to shake the memories of what happened to his wife and daughter, we wonder how he will be able to handle the vivid memories of his own atrocities. Garfield doesn’t let Paul off the hook, but nor does he alleviate other aspects of American society—police, lawyers and judges, penal system, and the general public—from the guilt that they’re as much involved in the problem of crime as the criminals, and that they can’t just leave it up to someone else to take care of.