Brian Garfield’s What of Terry Conniston? originally appeared in hardcover published by The World Publishing Company in 1971, with a paperback from Fawcett Crest the following year in 1972. It’s about a young woman, Terry Conniston, who comes from a rich family. She is kidnapped by a down-and-out rock n’ roll band looking for a quick trip to easy street. Unfortunately for them—and for the girl—the family isn’t so quick to pay the ransom. As the kidnapper’s hapless scheme begins to fall apart, Garfield explores the deep-seated corruption of the Conniston family business.

Newgate Callendar applauded the book in The New York Times when it first hit shelves, calling it “tough, violent, complicated, and [Garfield] brings the various elements together like a virtuoso.” Forty years later, What of Terry Conniston? may be out of print, but its capacity to absorb readers remains undiminished. It’s a tour-de-force of suspense fiction, expertly crafted and riveting from page one, and full of twists and surprises right up until the last page. 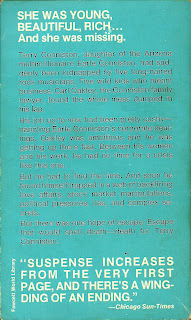 The opening chapter of What of Terry Conniston? is a paragon of craftsmanship. You want to know how to start a novel, and how to draw in readers and have them hooked before they even realize it? Study what Garfield does here. Carl Oakley, lawyer for business Arizona business tycoon Earle Conniston, is at the crime scene. A barn in the middle of the desert. Two dead men lay on the ground. Two sets of tire tracks go off in different directions. He knows the kidnapped girl, Terry Conniston—Earle’s daughter—was held captive here. But now she’s gone. So are the three other kidnappers, and so is the half a million-dollar ransom that was paid. Private Eye Diego Orozco is also on the scene, he but seems to be more interested in a land settlement dispute between Earle and the local Chicano community than the kidnapping. Earle, himself, is nowhere to be seen. The chapter ends with a telling line that will come to haunt the whole narrative—“And what of Terry Conniston?”

Garfield lays the clues in front of you right from the get go—the missing girl, the rock n’ roll kidnappers, the ransom, the tracks that lead nowhere, the disinterested family, the corrupt business—and leaves it to you to piece it all together. Without even realizing it, you’re putting two-and-two together, trying to make sense out of a crime and why the people most directly affected aren’t more concerned with the value of human life. And that’s when you know that Garfield has you hooked. You’re knee-deep in the narrative and it’s only chapter one. By the end, you’ll be up to your neck in nasty characters and their sordid motivations, and you won’t be able to turn away from it. At least I wasn’t.

The narrative drives ahead with economic precision, never wasting a word, never overstuffing a chapter, never taking the reader into unnecessary digressions. It’s trim and efficient prose, the mark of a writer in complete control. But Garfield also takes the story in several unexpected directions. The plot twists aren’t complicated—and for that they’re all the more effective. I won’t spoil them for you, but early on in the book something so simple, so natural, happens and it throws everyone—the characters in the book as much as the reader—off their guard. After that, all bets are off and anything can happen. 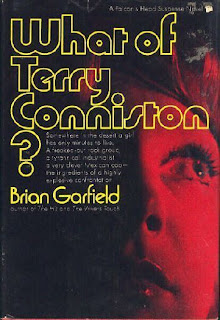 Second, there’s a real nastiness to the characters in the book, but there’s also an honesty in the way that Garfield describes them. The lawyer, the detective, the father—they’re white collar criminals who connive, blackmail, and twist laws to get what they want. Some of them have better intentions than others, but the methods are the same. They’re no better than the kidnappers, just smarter, and that makes them all the more repugnant. And as for the band, they’re heartless punks. Only Mitch, the guitarist, shows any hint of a conscience. Still, as the book reminds, he stood by and let it all happen. He’s dumb, naïve, and gullible—in short, he’s believable as a twenty-something crappy guitarist with a history as a petty criminal who gets suckered into a kidnapping.

As I mentioned in my review of Relentless, one of the challenges of writing a crime novel isn’t just making the crime plausible, but making the characters desperate enough to pull it off, no matter what the human cost. Garfield succeeded in Relentless, and he succeeded in What of Terry Conniston?.

“And what of Terry Conniston?”

Her character is interesting yet unexpected. She’s mentioned in the title, and she’s the inciting incident for the whole story. Everybody’s actions are based around her, yet she’s always the furthest from their minds. People treat her like an object, not a person. She’s part of an equation: the band wants to trade her for money, and the family is unsure if she’s worth the money. She’s the moral center of the book, but in an interesting twist Garfield places her off-center within the narrative. For the most part, we don’t see the story through her eyes. That is part of what makes the novel so effectively unsettling: it’s not comforting or reassuring to see the world through the eyes of so many characters that have little regard for human life. But it is also a fitting narrative technique considering the story at hand: Terry isn’t in control of her life—her family, the lawyers, and the band is—so why should she be the one telling the story? It’s another smart move on the part of Brian Garfield, an example of the subtle but skillful touches that he brings to his work.

What of Terry Conniston? is another winning suspense novel from Brian Garfield. Look for more reviews of Garfield’s work in the weeks to come on Pulp Serenade.
at May 27, 2011