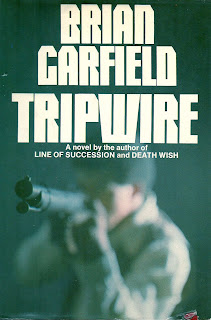 Brian Garfield’s Tripwire is an exciting and original Western adventure that crisscrosses the American Southwest deep into the mountains of Mexico. The main character, Sergeant Boag, isn’t your typical cowboy protagonist. A former slave, he had been freed during the Civil War and later was a Buffalo Soldier during the Indian Wars. Now, he’s serving time in an Arizona chain gang for being a vagabond. When he’s released, things look up when he’s offered a job helping Jed Pickett, a notorious Scalp Hunter for the US Government, steal a shipment of gold. But when Jed double crosses him, throws him overboard into the river and opens fire, Boag vows revenge. So begins the cross-country pursuit of one man against a small army of vicious gold brigands.

Three of Garfield’s strongest assets as a writer are giving readers unusual and evocative atmosphere, powerful action scenes, and innovative, distinctive characters—all of which are on full display in Tripwire. Tripwire is a revenge picaresque that, oddly enough, suggests a fusion of Mark Twain and Sam Peckinpah. The segmented trip and its multiple destinations seem like it could have originally been serialized in a pulp magazine. There’s also something Twainian about Boag’s journey, and how the river and the trail provide a procession of new characters, locations, and plot complications that propel the story forward. Portside towns, riverbeds, Mexican prisons, dingy backwoods cantinas, mountain fortresses, jungle trails—Boag’s travels offer a wealth of colorful and diverse settings, and Garfield brings each of them to life in vivid detail. And it would take a Peckinpah (or someone of his caliber) to cinematically capture the sweat, stink, and blood of Boag’s adventure, not to mention the Gatling gun and explosion-filled climactic battle at the end of the book. 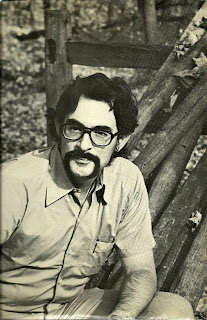 Boag is a fascinating character, and it is eye-opening to examine the legacy of the American West through his eyes. Garfield isn’t didactic about the political and racial underpinnings of the story, yet he’s astute enough to make them a significant part of the story. The West of the lawmen is one of fostering communities and implementing justice, The West of the homesteaders is of building families and developing land, and The West of gunfighters is one of mobility and ever-present danger. Boag’s experiences as a black man aren’t like any white character’s. He may have been “freed” from slavery with the Civil War, but he’s never experienced “freedom.” Even in the military, he was a second-class soldier. And while Manifest Destiny gave new opportunities to scores of people who moved Westward, Boag was still arrested based on the color of his skin. Though Boag never explicitly says so, his battle for vengeance is just as much as a battle for equality.

With Boag, Garfield also evokes the image of Richard Stark’s “Parker” character from The Hunter (Tripwire is dedicated to the real “Stark”—Donald Westlake). Both Boag and Parker are known only by one name, both were ripped off after committing robberies, and both set out on reckless revenge crusades that aren’t as much about money as they are about their characters’ philosophies and moral worldviews. It’s not so much about getting even so much as getting—and taking—what is rightfully theirs. They’re professionals, and while they kill along the way, they’re not outright “killers.” Boag is often in the position to blast his enemies into oblivion, but he usually resists and prefers to knock them out, tie them up, or otherwise disarm or incapacitate them.

Garfield finishes Tripwire with an open-ended conclusion, leaving space for Boag to turn into a series character. As far as I know, this is the only novel Garfield published with Boag, though I need to do more research to confirm this. If so, it’s a shame, as I think the character is rich enough to have developed several more novels around.

When Tripwire was first published, Newgate Callendar reviewed it for the New York Times. This is what he had to say about the book: “One may not believe that a black ex-soldier, a one-man army, can do quite all this one does. But the action moves breathlessly, there is a Grade-A sumbbitch of a villain, and the strong, silent Boag is a man for all men.” While Boag’s mission seems incredible, it was never beyond complete credibility (at least not for me). As Garfield shows in the magnificent culminating battle, Boag isn’t beyond hurt, nor does he have an unlimited supply of vengeance—or bullets. It is in those final moments, where each decision counts the most, and where life or death hangs on his every action (and bullet), that Boag is most human.

Overall I really enjoyed Tripwire. Fans of Garfield will know to expect first-rate storytelling and a gripping plot, and the author comes through once again. The novel is also an excellent example of how flexible and open the Western can be, and that there are lots of possibilities there still to be explored within the genre.
at May 31, 2011