"The Threepersons Hunt" by Brian Garfield (1974) 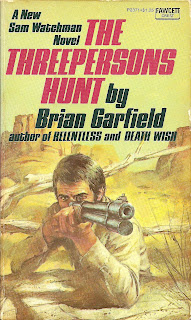 Sam Watchman, the Navajo Highway Patrolman from Brian Garfield’s Relentless, makes his second appearance in The Threepersons Hunt. In the first novel, Watchman had to track five bank robbers across a mountain during a blizzard while bucking the prejudice of his colleagues and the interference of the FBI. In The Threepersons Hunt, Watchman is finally given the lateral promotion he should have gotten years ago—a trial period as a Detective. The advancement, however, is a political move and not without its undercurrent of racism. There’s no pay raise, and the job is only temporary while he locates an escaped Apache prisoner named Joe Threepersons.

Watchman’s bosses are unaware of the long-standing tribal differences, and to them an Indian is just an Indian. Watchman tries to explain the situation to his bosses:

“Do you know how much cooperation I’m likely to get up there? I’m Navajo. Maybe we all look alike to you, but before the Anglos came down here and unified the Indians by giving them a common enemy, Apaches and Navajos used to shoot each other for sport. If the Apaches are hiding him out they might not talk to a white man about it but they’d sure as hell not talk to a Navajo.”

Determined to overcome the cultural and racial objects in his path, Watchman accepts the case. The search for Joe Threepersons, however, is not as straightforward as it sounds, and along the way Watchman realizes that he has uncovered a much deeper story of political corruption and murder cover-ups.

Sam Watchman is a great character, and I'm glad that Brian Garfield revived him for this second outing after Relentless. In fact, I wish there had been a third and a fourth. It's not only great to see a Native American narrator, but also to get a glimpse of contemporary Native politics and culture, as well as the relationships between the tribes. Too often Native American characters aren't given the depth or three-dimensionality they deserve, and I like how Garfield reversed the stereotype and showed the world through their eyes rather than have an outsider narrator looking at them. 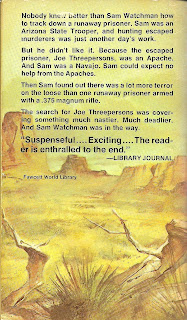 Despite sharing the same central character, Relentless and The Threepersons Hunt diverge in a number of crucial ways. Where Relentless was more action-oriented, The Threepersons Hunt unfolds mainly through dialogue that reveals increasingly complex motives and subterfuge. Threepersons is also told solely from the viewpoint of Sam Watchman, whereas the first book alternated between Sam and the criminals in a constantly shifting game of the hunted and the hunter. Each narrative approach could appeal to different readers, but I preferred Relentless for its taut narrative and sustained suspense. However, I really liked the political and cultural issues that Garfield was examining in The Threepersons Hunt.

The Threepersons Hunt also shares something in common with the plot of Garfield’s earlier book, What of Terry Conniston? In that novel (which I think is a little more successful), the title girl was kidnapped, but as her family contemplates whether to pay the ransom or not, her welfare becomes less important than the social and financial threat. Something similar happens to Joe Threepersons: the deeper Sam Watchman looks, the less he realizes that the Reservation and the authorities care about the escaped criminal. Legal water disputes between ranchers and the local reservation, and skeletons buried deep in the closet, are much more important than a man’s life.

In his review for the The New York Times, Newgate Callendar gave the novel a strong review when it was originally published in 1974 by M. Evans and Co. “His calm, relaxed prose contains a great deal of tension; he has a good eye and, equally important, a good ear. Thus his dialogue rings true. In addition to writing a thrilling chase story and building a well-plotted mystery around it, Garfield gives a fine picture of reservation Indians…” I’d agree with Newgate about the “relaxed prose” and especially about the excellent insightful portrayal of contemporary reservation life and politics, but I feel that a little concision would have helped to tighten up the plot a bit. Still, Garfield is an excellent writer, and The Threepersons Hunt has some terrific scenes. Both of the Sam Watchman novels are now out of print, but hopefully someone will think to republish them again sometime soon.