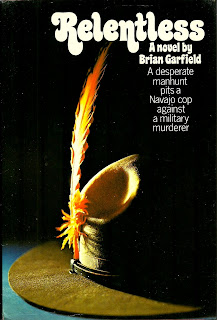 Relentless is the perfect title for Brian Garfield’s 1972 novel about Navajo Highway Patrolman Sam Watchman. It captures the tenacious drive of five bank robbers who rob an Arizona bank of $1,000,000—the largest heist in the state’s history. It also aptly describes Watchman’s persistence as he chases the robbers across a perilous mountain range during a raging blizzard. Moreover, “relentless” nails the momentum and impact of Garfield’s style. The characters are strongly composed and the plot seethes pitch-perfect tension every step of the way. Relentless is a masterful novel from a writer who, at the young age of 33, was already a seasoned pro with over a dozen titles under his belt (including the terrific kidnapper caper What of Terry Conniston?). Garfield may have got his start early (his first published novel was written when he was 18), but he paid his dues, and his work shows the craft, care, and quality that comes with experience.

One of the primary challenges of writing a crime novel is not just making the crime believable—it’s making the characters desperate enough to pull it off, regardless of the difficulty. In this regard, Garfield is extremely successful. Relentless is structurally straightforward—the heist is already in motion on page one, and the rest of the book is a cat-and-mouse chase that alternates perspectives with each chapter—but with simplicity comes clarity, and precision gives power. Garfield builds his scenes with very specific, detailed knowledge about the Arizona desert, flying a plane through a blizzard, tracking people in the snow, wilderness survival. These are the marks not just of an author who has done his research, but of one who knows how to use realism for its fullest dramatic impact. 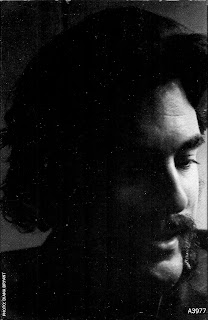 There’s a great deal of subtle, but significant, social commentary in Relentless. Foremost is its Navajo protagonist, Sam Watchman. He’s a unique and refreshing character to read about, and it’s great to see a Native American action hero in contemporary times presented with such depth and nuance. When the book was written in the early 1970s, the Native American Civil Rights movement was in full swing, and in 1972—the year Relentless was published—the American Indian Movement even occupied Wounded Knee as a protest. As Sam Watchman struggles with prejudice from his co-workers, the FBI, and even the robbers themselves, Garfield imbues his character with the political spirit of the period.

Another social aspect of the book has to do with the Vietnam War. Four of the robbers were vets, and group’s mastermind—the Major—was given a dishonorable discharge for killing innocent Vietnamese civilians. Garfield, however, doesn’t make the morality so black-and-white: he asks (not in such an obvious way) who is responsible, the grunts following orders, their officers in the field, the superiors back at the base, the training instructors, the politicians? Like David Morrell did the same year with First Blood, Garfield is bringing just a piece of the Vietnam War back home to the United States.

There’s no denying that Relentless is filled with scores of exciting, action-packed scenes, but it’s the strength of such well-developed characters that make the novel so compelling to read, and so satisfying to see through to the very last page.

Relentless was made into a TV movie in 1977 starring Will Sampson (from One Flew Over the Cuckoo’s Nest and The White Buffalo). The movie was never released on home video, but I’m trying to track down a copy…Garfield later revived Sam Watchman once more for The Threepersons Hunt in 1974, which I will review later this week.
at May 24, 2011