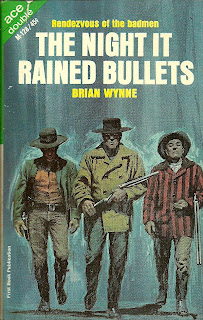 The Night it Rained Bullets is a damned good title. It's tough, ominous, and atmospheric. It also happens to be one hell of a great book. The whole story takes place over the course of 24 hours as a blizzard rolls in and cuts the Arizona town of Spanish Flat off from the rest of the world. The weather not only prevents help from getting in—it also prevents the criminal element from getting out.

Marshal Jeremy Six has his hands full as he deals with a number of livewires just waiting to go off. There’s Jack Lime and his drunken hooligans, who were bested once by the Marshal and are gunning for revenge; Will January, the notorious gambler who is so good at cards—and quick on the draw—that he doesn’t have to cheat; and then there’s Sammy Preston, an alcoholic deadbeat son who inherited his father’s enormous wealth but can’t live up to his legacy. To top things off, there’s Jeremy’s paramour, the saloon keeper Clarissa, whose former lover took a bullet to save the Marshal; and Amy Preseton, who has a yen for the new gambler in town, which only infuriates her brother, Sammy. Fate has thrown them together, but it is up to them to decide who makes it out alive.

One of the things I loved about The Night it Rained Bullets is the elemental simplicity of its construction. There’s only the barest outline of a plot, yet the novel is bursting with story, action, and excitement. Characters are the catalyst in The Night it Rained Bullets. Once the blizzard hits, confrontations between the characters is inevitable—but it’s just a question of which explosion is going to go off first. Garfield has assembled an extraordinary ensemble cast in this book, and it comes across in his writing that this is a town with history, and that each of the characters has a past that has brought them to this point in time. Somehow Garfield manages to evoke these complex relationships in a deft and economical fashion. He doesn’t waste words, nor does he skimp on the human details that make his characters and the story come alive.

Another thing I like about the novel is the intimate, immediate sense of space that Garfield conjures up. No one writes about the Western winter like Garfield. In his books, the cold is as unrelenting and violent as the hot desert sun. There’s also something very active about winter—the snow and the wind seem to come alive in a way that the more static heatwave doesn’t. In this novel (and in Garfield’s excellent novel Relentless), it is as if the winter elements have come alive and taken a personal interest in making the characters as miserable as humanly possible. If they’re not worrying about hot lead ripping out their guts, they’re worrying about getting lost in the storm, their finger freezing to the trigger, being buried alive in a snowdrift, or the cold slowing their draw just enough so they don’t get the first shot off.

I won’t give away the ending, except to say that it’s as haunting and cold as the winter wind. When all is said and done, when the last round have been fired, I don’t think Garfield sees anything heroic about the pools of freezing blood all over town. Jeremy Six may be the Marshal, but he doesn’t come off like a superhero like many lawmen of Westerns past. Not that there’s anything wrong with that archetype, but just that Garfield is doing something different, and it’s deliberate. The final showdown isn’t a blaze of glory, but something more desperate, more spontaneous and less controlled. It isn’t a single-handed miracle, but an effort that takes a group of people, and costs a number of lives—and not just the outlaws, either. The final page is elegiac. There’s a touch of tenderness amongst the survivors, but also a sense of loss, and a longing that can’t be soothed. And for that, the characters have stayed with me, even after I’ve put the book back on the shelf and picked up another one. (Another Garfield, of course.)

All in all, a tense and thrilling Western from Mr. Garfield, one of the genre’s best practitioners. Unfortunately, it is out of print, but used copies can be snagged for pretty cheap.
at May 30, 2011