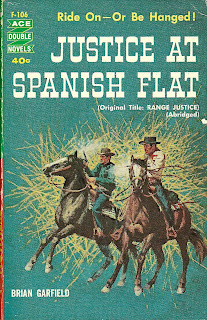 Range Justice, published in 1960 by Avalon, is the earliest Brian Garfield novel that I can find. His website says that his first novel sold was written he was 18, though the site doesn’t mention the title. Since he was born in 1939, he would have been 21 when Range Justice was published, so this very well could be what he wrote when he was 18. I’ll do some more research and find out if this is true. I read the abridged version, Justice at Spanish Flat, published as an Ace Double (along with Tom West’s The Gun From Nowhere) in 1961. Even though some scenes seemed slightly truncated, the pacing a little rushed at times, the story itself is wonderful Western excitement.

Tracy Chavis used to be the foreman at the Chainlink Ranch in the town of Spanish Flat. He and the Ranch’s owner, Jim Boyce, had gone on a trip to sell the herd. After making the sale, they got drunk and someone rolled them for the money. Ashamed, Boyce headed home—broke. Chavis stayed away, determined to earn back the money they had lost.

Four years later, Chavis has the money and he is returning to Spanish Flat. When he arrives, however, he found much has changed. He’s walked right into the middle of a large-scale range war between ranchers and nesters, and Chainlink is caught right in the middle. Since Jim Boyce has passed away, his daughter Connie has taken over the ranch, and she isn’t quick to forgive Boyce for letting the money slip away, or for being away for four years. Chavis is determined to not only win her trust, but settle the range war—and find the identity of the man who robbed him four years ago.

There’s a strong through-line of action throughout the novel, supported by nice cast of supporting characters. Garfield is good at writing ensemble narratives whose characters drive the story forward. His plots can be simple—such as in What of Terry Conniston?, Relentless, or The Night it Rained Bullets—but their clarity and focus is something to be relished by readers, and studied closely by writers. Justice at Spanish Flat may be an early novel (and abridged one, at that), but it still shows the seeds of the gifted writer that Garfield would very soon blossom into. It's not as dark as The Night it Rained Bullets or as tense as Relentless, and the characters are more likable than in What of Terry Conniston?, but even though it might be on the lighter side, there is still much to enjoy in Justice at Spanish Flat.

On another note, there’s something sort of surreal about this cover! The riders are lost in a sea of blue-green ambiguity, and behind them is an explosion of hay. Most of the Western paperbacks from this year that I’ve seen are usually ground in realism, albeit heavily romanticized (especially grimaces, guns, and bosoms). Anyway, I like this cover!
at May 28, 2011