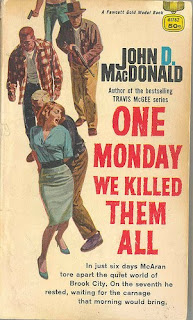 Find a Gold Medal paperback. Look at the title. Chances are, you’ll probably want to read it. Doesn’t matter if you’re familiar with the author’s work, or even if you like them. Heck, even if you hated the last book you read by the author, one look at another title and you might think to give him or her a second chance.

Earlier in the spring, Eric Beetner published a terrific essay at the Mulholland Books blog called “Talking Titles” in which he discussed the history of noir titles, from Mickey Spillane to Jason Starr to his own novel, One Too Many Blows to the Head, co-authored with J.B. Kohl. 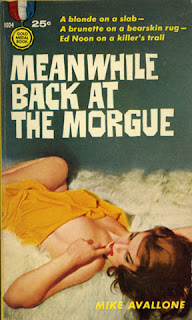 Beetner’s essay got me to thinking about my favorite titles. A lot of them—but not all—come from Gold Medal paperbacks. I didn’t merely want to repeat what Beetner did so well in his essay, so I decided to put my own spin on it. I went through all the Gold Medal titles listed at BookScans and picked out my 50 favorites. I won’t claim they are the best titles (I’m sure I missed some gems), nor will I claim that these are the best novels. I haven’t read most of them, so I have no idea if they are any good. Some are classics (Down There by David Goodis, Pop. 1280 by Jim Thompson), some are forgotten gems by celebrated authors (Some Must Die by Gil Brewer), and some I had never heard of before. All the titles are arranged alphabetically by author.

So, without further ado, here are Pulp Serenade’s selection of 50 Great Gold Medal Titles. If you have favorites of your own, be sure to mention them in the comments section.

Meanwhile Back at the Morgue by Mike Avallone
Not I, Said the Vixen by Bill S. Ballinger
Seven Votes for Death by Pat Bannister
Satan Is a Woman by Gil Brewer
Some Must Die by Gil Brewer
Hell’s Our Destination by Gil Brewer
Lovely and Lethal by Frank Castle
Black Wings Has My Angel by Elliott Chaze
The Lady’s Not For Living by Dexter St. Clair
The Captain Must Die by Robert Colby
Make My Coffin Strong by William R. Cox
Case of the Nervous Nude by Jonathan Craig
I Came To Kill by Gordon Davis
The Lady Kills by Bruno Fischer
Second-Hand Nude by Bruno Fischer
Death and the Naked Lady by John Flagg
Down There by David Goodis
The Moon in the Gutter by David Goodis
The Wounded and the Slain by David Goodis
Assassins Have Starry Eyes by Donald Hamilton
Jezebel in Crinoline by Homer Hatten
Horsemen From Hell by Homer Hatten
So I’m a Heel by Mike Heller
Red Runs the River by William Heuman
To Kiss, or Kill by Day Keene
Come Murder Me by James Kieran
Cry Hard, Cry Fast by John D. MacDonald
The Girl, The Gold Watch & Everything by John D. MacDonald
One Monday We Killed Them All by John D. MacDonald
It’s Your Money—Come and Get It by Sidney Margolius
The Name of the Game Is Death by Dan J. Marlowe
The Raven is a Blood Red Bird by Dan J. Marlowe and William Odell
Killers are My Meat by Stephen Marlowe
Homicide Hussy by Atha McGuire
I’ll See You In Hell by John McPartland
Come Destroy Me by Vin Packer
The Evil That Men Do by Hugh Pentecost
Everybody Had a Gun by Richard S. Prather
Strip For Murder by Richard S. Prather
Dig My Grave Deep by Peter Rabe
It’s My Funeral by Peter Rabe
Kill The Boss Good-by by Peter Rabe
Murder Me for Nickels by Peter Rabe
Let Them Eat Bullets by Howard Schoenfeld
Pop. 1280 by Jim Thompson
Death Takes the Bus by Lionel White
Lament For a Virgin by Lionel White
Fires That Destroy by Harry Whittington
Don’t Speak to Strange Girls by Harry Whittington
Hill Girl by Charles Williams 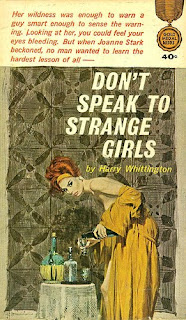 A few words on the selections:

Some of the titles are simply salacious (Second-Hand Nude by Bruno Fischer), which is often enough. Others are deeply nihilistic (Hell’s Our Destination by Gil Brewer, or Dig My Grave Deep by Peter Rabe). There’s also a sense of humor in some of them (Strip for Murder by Richard S. Prather, Meanwhile Back at the Morgue by Mike Avallone). Elliott Chaze’s Black Wings Has by Angel and Goodis’ The Moon in the Gutter have a poetic ring to them, while Day Keene’s To Kiss, or Kill almost seems like a pulpy evocation of Hamlet’s dilemma. There’s something melodic about Donald Hamilton’s Assassins Have Starry Eyes and Homer Hatten’s Jezebel in Crinoline, they roll nicely off the tongue and there’s an element of wordplay that is subtler than, say, Death and the Naked Lady by John Flagg. Harry Whittington even seems to be looking out for us readers, offering us the sage wisdom, Don't Speak to Strange Girls. (How many of Whittington's own protagonists could have been spared, had they heeded the author's advice?) 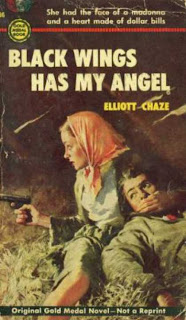 Many of the titles are blunt, but few are as economical as Hill Girl by Charles Williams. 8 letters and it tells you exactly what you want to know. Pop. 1280 by Jim Thompson is, at first, strange, because there’s nothing sexy or alluring about that number—but there’s an inherent desolation that lures one in. Stephen Marlowe takes a comic spin on the hardboiled sensibility with Killers Are My Meat, and Lionel White’s Death Takes the Bus harkens back to the pulp days of yesteryear (I can almost imagine Fredric Brown using a title like that, but I doubt that White’s novel is anything close to Brown). Sidney Margolius’ It’s Your Money—Come and Get It, Vin Packer’s Come Destroy Me, and Peter Rabe’s Murder Me for Nickels outright provoke the reader, taunting them and making them implicit in the crimes contained within the pages.(Rabe’s also makes me wonder why he has such low self-esteem, why not Murder Me for Quarters, at least?). And is there anything more violently chilling than One Monday We Killed Them All by John D. MacDonald?

Titles are tricky business. The best of them not only draw our eyes to the book, but also capture our imagination in their own way.
at May 29, 2011