Noir Poetry, Fiction and Jazz at The New School

As part of The New School's Noir Festival, tonight's offering was an evening of Noir Poetry, Fiction and Jazz. 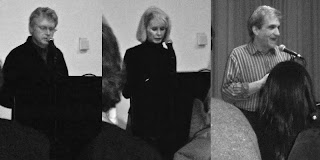 Noir Poets and Writers of the Evening:
Robert Pinsky, Mary Gaitskill and Robert Pinsky
First up was Robert Polito, author of the superb and monumental Jim Thompson biography Savage Art. Polito began with some selections from Kenneth Fearing, best known for his novel The Big Clock, but who was also an accomplished poet. Polito called Fearing the missing link between William Carlos Williams and Allen Ginsberg and read Fearing's poems "St. Agnes' Eve" and "Angel Arms." Of his own work, Polito read several poems, including the title poem from his collection Hollywood & God, and "Barbara Payton: A Memoir," about the actress' later years spent boozing in a bar after her career crashed and her relationships with Franchot Tone and Tom Neal went to hell.

Polito remarked of his collection, "Hollywood & God is, as most noir is, a book of ghosts." His poem "Sister Elvis," about a female Elvis impersonator, has a great line I couldn't help but jot down: "All my men were cheap, but they were quick." This is the femme fatale's lament, what Gloria Grahame and Barbara Payton's character would say every night. Polito knows noir, and his poetry cuts to the core of its spirit.

Up next was Mary Gaitskill, who read her short story "The Other Place," which was recently featured in The New Yorker. It's a dark tale that skilfully examines the myriad ways that violent impulses reveal themselves in what appears to be a typical middle-class environment. It is as frightening as it is believable, sort of a fusion of Jim Thompson and Flannery O'Connor.

My mom would be in the kitchen making dinner and talking on the phone, stirring and striding around with the phone tucked between her shoulder and her chin. Outside, cars would go by, or a dog would run across the lawn. My homework would be slowly getting done in my lap while this sexy girl was screaming “God help me!” and having her legs torn off. And I would go invisibly into an invisible world that I called “the other place.” Where I sometimes passively watched a killer and other times became one.

Following Gaitskill was Robert Pinsky, the former Poet Laureate of the United States (from 1997-2000). Pinsky was accompanied by a jazz trio: Ben Allison on bass, Frank Kimbrough on piano, and Rudy Royston on bass. It was a terrific way to cap off the evening. The four of them performed very well together, with the music playing off the syncopation of the words, and the poem sinking in to the rhythm of the songs. Pinsky started off with some Baudelaire, then Sterling Brown's "Harlem Happiness," and even a rendition of Robert Frost's "Acquainted with the Night," which lent itself perfectly to the noir atmosphere of the evening.

I have been one acquainted with the night.
I have walked out in rain -- and back in rain.
I have outwalked the furthest city light.

I have looked down the saddest city lane.
I have passed by the watchman on his beat
And dropped my eyes, unwilling to explain.

I have stood still and stopped the sound of feet
When far away an interrupted cry
Came over houses from another street,

But not to call me back or say good-bye;
And further still at an unearthly height,
O luminary clock against the sky

Proclaimed the time was neither wrong nor right.
I have been one acquainted with the night.

Overall it was a terrific night of noir culture. Thanks to The New School for hosting such a wonderful (and free!) event. 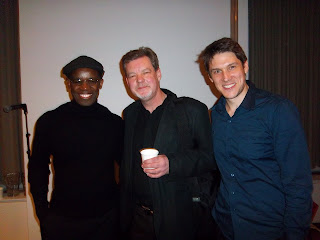