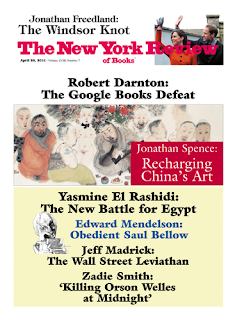 The latest issue of The New York Review of Books (April 28, 2011) has several articles that caught my eye.

--Geoffrey O'Brien reviews Iphigenia in Forest Hills: Anatomy of a Murder Trial by Janet Malcolm. A true crime book about the trial of Mazoltuv Borukhova, who hired Mikhail Mallayev to murder her husband, Daniel Malakov in 2007. What I liked about O'Brien's review is that he pays attention to not only Malcolm's reportage, but the way that she analyzes the real-life courtroom drama in an almost literary manner.

"The truth is messy, incoherent, aimless, boring, absurd," Malcolm has written elsewhere. "The truth does not make a good story; that's why we have art." The paradox of Malcolm's writing is that all her art is deployed to reveal the seams and interstices of the art-making process, to lay bare the details fudged or blurred or condensed, the inconvenient incongruities and confusions regularized or omitted, the bias by which certain details are foregrounded and others tossed aside.

--"Killing Orson Welles at Midnight" by Zadie Smith is a review of Christian Marclay's film The Clock. A 24-hour museum installation piece, The Clock reconstructs an entire day solely from moments from existing movies that feature clocks. I like how Zadie Smith deconstructs the subtle role of editing in movies and its relationship to the passing of time, something that often goes overlooked in most film reviews.

The Clock makes you realize how finely attuned you are to the rhythms of commercial (usually American) film. Each foreign clip is spotted at once, long before the actor opens his mouth. And it’s not the film stock or even the mustaches that give the game away, it’s the variant manipulation of time, primarily its slowness, although of course this “slowness” is only the pace of real time. In commercial film, decades pass in a minute, or a day lasts two and half hours....A parsing of the common enough phrase “I don’t like foreign movies” might be “I don’t want to sit in a cinema and feel time pass.”

--Joyce Carol Oates reviews James Ellroy's The Hilliker Curse: My Pursuit of Women. What a pleasure it was to read this review. Oates is a rare talent. Brilliant novelist, short story writer, and critic. I haven't read her recent memoir about the passing of her husband, but I'm sure that is also terrific. She fearlessly engages with Ellroy's style, his ego, and his own self-constructed mythology. She's not afraid to call him out when she feels he is being repetitive, narcissistic, or inaccessible to readers not already familiar with the World According to Ellroy; but she's an insightful enough reader to recognize the personal depths of The Hilliker Curse, Ellroy's trail-trailblazing original style, and his ability to transmit his own fevered passions and obsessions through the page.

--Edward Mendelson reviews Saul Bellow: Letters edited by Benjamin Taylor. Mendelson compares and contrasts excerpts from Bellow's published novels with his personal letters to show how deeply personal his work was. I only know Bellow from reputation and am not familiar with his work, so reading this review was rather confusing. I have a few Bellow novels back in Maine at my folks' place; the next time I visit I will have to take one off the shelf and take a gander.
at April 28, 2011