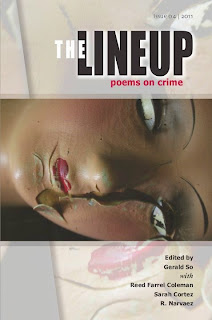 It's a great pleasure to see that The Lineup is now in its fourth installment and showing no signs of slowing down (and they are accepting submissions for The Lineup #5 until July 31). The first volume appeared in 2008, and it has since become an annual tradition. Beyond the high quality of the individual poems published by The Lineup, it is this "tradition" that is its greatest accomplishment. Gerald So and his partners in crime poetry are not only making an annual event to look forward to, but also foster a movement and forging a community where there was none before (at least none that I knew of). One of the great parts of this community is the diversity of voices and its overall inclusivity. Up-and-comers and established authors appear side-by-side.

Over the past couple of years, the publishing industry has been upended (and the chaos isn't over yet), but one thing the crime fiction community has going for it is that it sticks together, and The Lineup is further proof of that. It's also proof that the crime fiction community takes chances. Crime and poetry--for a whole book? 4 volumes worth? And a fifth in the works? Yes, yes, and YES!

"The marriage of crime and poetry makes perfect sense. Poetry has its roots in heightened emotion, in crystal clarity. Poetry has always been about life’s lines and edges, the tensions between love and hate, ugliness and beauty, exaltation and despair. The poet’s job has always been to focus the laser, to distill, to sharpen, to filter and translate for the rest of us. What could be a more natural subject for poetry than crime and what could be a greater challenge?"

26 writers accepted this challenge in The Lineup #4. It's the biggest crew yet for The Lineup. 19 appeared in #3, 13 in #2, 14 in #1. I know one shouldn't value quantity over quality, but when the quality is so consistent, who is to complain about a few extra poems? It's also a positive sign to see new voices in each issue. Hopefully The Lineup family will continue to grow with issue #5 in 2012.

All of the poems were a pleasure to read. These five were among my favorites:

--Mary Christine Delea's "Leaving Long Island" crystallizes a moment when you recognize your own vulnerability, when crime hits close to home. "Suddenly not so keen to leave home for college in a month, away from what wasn’t really safe, but felt like it when you needed it to."

--Keith Rawson's "A Story to Tell Our Daughter" is as great as any of his short stories, and he shows he has the poetry chops to shift mood on the dime between panic, dread, humor, and nostalgia. "One eye on the gun, The other on the road
and kept driving."

--H. Palmer Hall's "Suburban Blues" shows exquisite form, the shape of the poem is itself part of the artfulness. It ends with a beautiful, uneven tail, an evocative image that breaks through the pattern and cements the mood of the poem.

--Laura LeHew's "The Organized Offender" is a museum exhibition-like description of Ted Bundy. There's terror in its objectivity, and it undermines our own distanced fascination with violence, which LeHew hits home with this chilling last line: "The radical separation of form and content, conceals and belies the seriousness and complexity of his art."

--Reed Farrel Coleman's "Slider, Part 7" is a haunting, elegiac look at a mass execution outside Kiev. Coleman's poem is expertly constructed, and its shifting emphasis from human emotions (crying, begging) to inhuman details (bullets, bodies, quicklime) reinforces the horror of the murders, and the passage from being a living being to a still corpse.

The Lineup 4 was edited by Gerald So with Reed Farrel Coleman, Sarah Cortez, and R. Narvaez. For information about purchasing a copy, visit The Lineup's Website.

Here is a list of all the contributors to The Lineup 4.