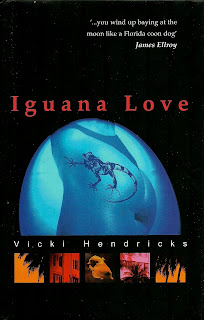 After making her stunning debut with Miami Purity, Vicki Hendricks returned with another jolt of sultry Miami neo-noir, Iguana Love. Originally published by Serpent’s Tail in 1999, Iguana Love follows Ramona Romano, a part-time nurse fed up with her passionless, dead-end marriage and who decides to follow her desires. She kicks her husband out, takes up scuba diving, and begins a series of love affairs. As often happens in the noir universe, Ramona’s drive for self-control soon spins her life completely beyond her control, and she becomes increasingly consumed by sex, danger, and bad, bad men.

Noir protagonists stand on the precipice of self-knowledge. They are only partially aware of what they are doing, only semi-conscious of their self-destruction. Noir blindness is like an element right out of Greek Tragedy: it’s something the characters can’t help but do to themselves. Ramona doesn’t know how right she is when she says to her husband at the start of the novel, “I’m the problem…It’s all inside of me.” Much of Iguana Love is structured around Ramona actualizing what is “inside” of her, and making those proverbial dreams come true. She exchanges a boring sex life with Gary for an increasingly complicated power struggle between four hunks of sea-diving beefcake: Dennis, her sweet natured diving partner; Rory, her personal trainer; and her two diving instructors, Charlie and Enzo. Dennis, Rory, and Charlie are more than willing to give Ramona what she wants. Only Enzo plays hard to get: he stands her up; leaves violent, drunken, jealous phone messages; and teases without satisfying her. Naturally, Enzo is the only object of her desire. 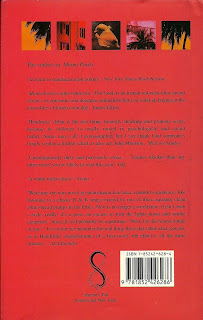 Hendricks has a gift for thoroughly describing physical details without falling into the trap of tedious exposition. Her phrases have the precision of a technical drawing, the redolence of a photograph, and an emotion connection that can come only from experience. Hendricks lives in Florida and is an experienced diver, and her first-hand knowledge shines through in Iguana Love. She writes about shopping for diving paraphernalia with an addict’s anticipation and exuberance; and diving expeditions are as sensual as they are suspenseful, fully aware as she is about the dangers and pleasures of the sport. The particularities of Florida’s environment and activities are distinguishing, recurring facets of Hendricks novels and stories. There’s an unusually unerring and evocative sense of place to her work, an authenticity that only adds to the reader’s engagement and identification with the narrative.

Despite what you might think on first glance, Iguana Love isn’t such an obvious or salacious title. The character of the iguana plays a haunting role in the novel. One of Ramona’s friends once had an iguana that would perch on her owner’s shoulders like a mink. When one serendipitously falls into Ramona’s life, she decides to capture it and tame it. Their relationship is fraught with violence, trepidation, obsession and neglect. Animals have a special, privileged, and meaningful place in Hendricks’ world. Their significance is at once literal and metaphoric: they’re objects of repressed affections for characters that have no other outlets, as well as symbols of the natural world, of danger, instinct and sensuality.

Towards the end of Iguana Love, narrator Ramona Romano reflects that, “Life was fucked. Love was fucked.” She could have very easily made that same observation at the start of the novel, but coming at the end of her long adventure it means something different. She’s had so many opportunities to take different paths along the way. “I thought, fuck, if I did have a dick, maybe I wouldn’t be where I was right now. I could choose my own kind of trouble.” Would things have turned out better if she had taken an alternate route, made different choices? As a reminder of the prescience she showed at the start of the novel, Ramona ultimately decides: “My life was completely fucked and there wasn’t anything I could do about it by then.” The true noir protagonist never has any real choice—circumstance, compulsion, and character decides everything for them. Call it fate or call it luck—who knows, maybe it is a little bit of both. Either way, like many noir protagonists before her, Ramona must fight a battle on two fronts: against the world around her, and the world inside her.

Iguana Love is available as an ebook from Top Suspense Group. Be sure to visit Vicki Hendricks’ blog to keep up-to-date with her projects.

Here are some of my favorite quotes from the novel:

“It was obvious that even the simplest bond produced an injury.”

“I knew what she was feeling, wanting to be free and not wanting to.”

“Something in me didn’t care, and my brain couldn’t change it.”

“I tried to give up all my wild notions, but it didn’t work. I had seawater on the brain. Divers to explore. Enzo. Flowing freedom. Without a lobotomy, I couldn’t change.”
at April 06, 2011