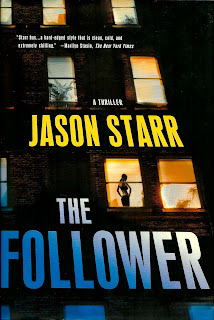 The Follower shows why Jason Starr is one of the great contemporary writers of New York City. He has an instinctive feel for the city’s pulse, its labyrinthine layout, and the neuroses and delusions of its inhabitants. Books like Panic Attack, Fake I.D. and the graphic novel The Chill chart the geographic diversity of New York and instinctively locate the natural terror inherent in every city block. In The Follower, Starr seizes upon the emotional torment of a young woman and communicates to the reader the fear of feeling alone and vulnerable while being surrounded by millions of people—each of whom contain the potential for unrealized terror.

One of the great ironies of New York City is that, despite being a big city, sometimes it feels as intimate—or claustrophobic—as a small town. Especially Manhattan. The skyscrapers and apartment complexes may tower higher and higher into the sky, but the size of the island remains the same. With such a dense concentration of people, it’s not uncommon to run into someone you know on the street, at the corner bodega, or at the gym. 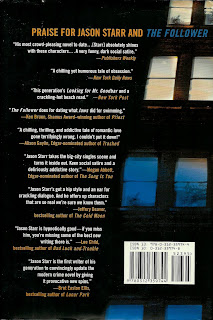 Or so Katie Porter thinks when she sees Peter Wells at her gym. In fact, she’s strangely comforted by seeing someone from her hometown of Lenox, MA. Things aren’t going well with her boyfriend Andy, and she needs someone to talk with. Peter seems so caring, so sensitive, so attentive. But soon, all this attention starts to seem creepy and their meeting at the gym too convenient, as if it were planned. Paranoia takes over as Katie is convinced that someone is following all over the city, and Manhattan’s grid-like network becomes as entrapping as a rat’s maze.

Starr’s gifted ability to blend absolute panic with razor sharp humor is on full display in The Follower. More than just a suspense story, it’s also a satire on the New York singles scene, with twenty-something post-grads bar hopping and drunkenly flirting with anything on two legs. Starr shifts perspectives between his three main characters—Peter, Katie, and Andy—and the contrast of their unique perceptions is frequently funny. There’s also a hubristic arrogance to Peter’s observations that seems to embody noir’s dark humor: “Killing people and getting away with it was so easy. You had to be a total moron to get caught.” 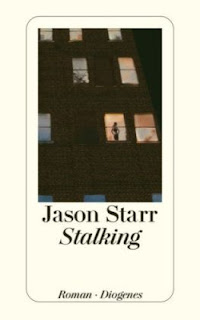 Starr writes of the optimism of losers. Peter’s recurring hopefulness—“Everything could work out perfectly” and “But he reminded himself that this was only the beginning”—belie the hopelessness of their missions. Starr’s protagonists frequently mix the defeatism of David Goodis with the psychopathy of Jim Thompson. Like the down-and-out bartender Tommy Russo in Fake I.D., Peter Wells is a model of this noir mixture of someone too delusional to realize how depressed they are. If he weren’t so goddamned homicidal he’d probably be suicidal. Unlike the debt-ridden Tommy, Peter has money to burn, time to lose, and dreams to realize—dreams which quickly turn into nightmares of repressed desire and frustrated failure.

If Peter were just an obsessive stalker, he would be a one-dimensional character. Starr, however, adds an innovative twist to Peter’s personality. As part of his job at the gym, Peter has to go out onto the street like a barker and sell gym memberships to passersby. For a sociopath that can’t connect with people without stalking or killing them, Peter is ironically great at relating with people on a superficial level. As his boss tells him, “You know how to relate, know what I’m saying? Even some stranger on the street—man, woman, it doesn’t matter. They like you right away, and when they like you they trust you. That’s the whole key with sales.” There’s a Highsmithian duplicity to Peter Wells, a chameleon-like capacity for changing his personality, only Peter isn’t as diabolically clever as Mr. Ripley—Peter’s not a genius, his plans frequently fail, and there’s something very ordinary about him, which makes his character all the more frightening. There’s only one Ripley, but Starr gives the impression that there could be any number of Peter Wells out there.
Posted by Cullen Gallagher at 9:03 AM